By Julia Kindelin and Brittany Benson | 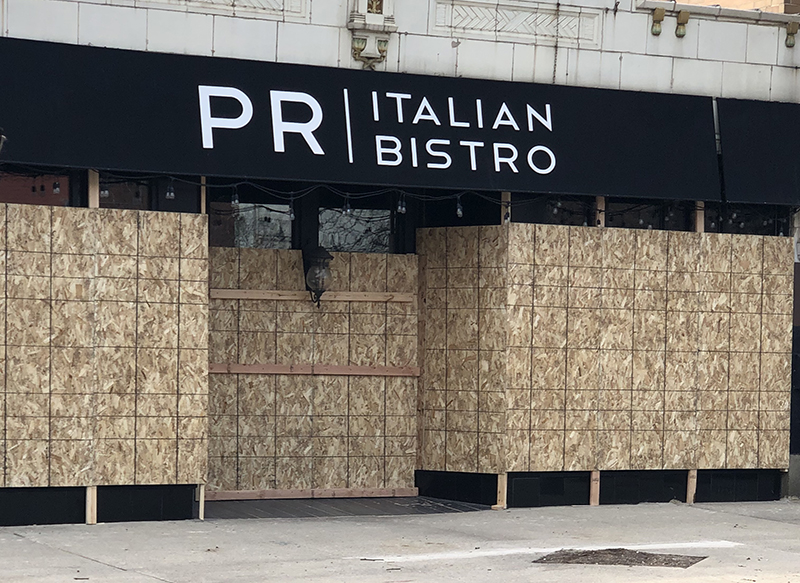 Some Chicago small businesses have closed during the pandemic. Pizza Rustica in Lakeview tried
delivery and takeout for a couple of weeks before shutting down and boarding up the location.

By Brittany Benson and Julia Kindelin

The majority of Americans live paycheck to paycheck, and 27-year-old DSW employee Karen Nhol of Chicago is no exception.

But when the global pandemic shut down DSW stores on March 18, Nhol and many others  were left wondering what would happen to their financial futures.

“When this began I really didn't know what to make of it. It was and still is very scary,” she said. “ I not only just take care of myself but I also take care of my family that includes my mom, my dad, and my brother.”

Nhol is among more than half a million Illinois workers scrambling to find money to pay rent and other living expenses after Illinois Gov. J.B. Pritkzer announced in a press conference that a statewide stay-at-home order would go into effect on March 20.

Like many other governors, he made the order in an effort to ease stress on hospitals and healthcare workers swamped with COVID-19 patients. The initial order was to end on April 7, but a surge in cases prompted Pritkzer to extend it until April 30 and then the end of May.

John Quigley, president and CEO of the Elmhurst Chamber of Commerce & Industry, has served his community since 1999.

“The City of Elmhurst is an affluent community in one of the wealthiest counties (DuPage) in America, but that financial strength does not make our businesses immune to economic or health disasters.  Our community weathered the Great Depression better than most municipalities in the Chicagoland area and also recovered faster than most. I can only hope that history will repeat itself in this case.”

Quigley acknowledged the comparison between the COVID-19 pandemic and the 2017-19 economic downturn.

“Between 2017-19, most businesses survived the economic downtown by trimming fat or belt tightening, with workforce cuts resulting in low double-digit unemployment numbers,” he said. “While some businesses closed their doors, opportunities presented themselves for both existing and new business growth for those properly positioned to take on that challenge.”

The 2017-2019 “Retail Apocalypse”, closed over 9,000 brick-and-mortar stores across the United States. In the midst of economic downturns occurring during the pandemic, it is likely more businesses will close, experts say.

“Even if closed, small businesses (and their employees) who obtain the eight weeks of PPP funding should be able to survive through May and, for some, into the first weeks of June,” he said. “As with all economic disasters, some businesses will never re-open.”

The order encourages residents to work from home if they can, enforces social distancing, closes schools and all non-essential businesses. Non-essential businesses were classified as anything that is “recreational in nature”, this may include businesses that don’t provide groceries, health support, financial support, or utilities. Restaurants also fall into this category, but are allowed to remain open though drive-through and pick-up options only.

This left millions of employees and business owners without a paycheck, or with one that is significantly less than they were used to.

By April 23, 26 million Americans had applied for unemployment benefits, and on that same day, the U.S. Commerce Department reported that retail spending in March collapsed by the largest number on record. Two weeks later, the jobless rate hit 14.7%, the highest since the Great Depression, as the U.S. lost 2.5 million jobs in April alone.

Spending for travel, at department stores and clothing stores decreased, while home-improvement spending, grocery stories and liquor stores saw some of their best growth.

The DSW shoe stores shutdown was originally just for two weeks, The company offered its employees a two-week emergency pay plan until March 28.

This left many employees, including Nhol, in question if emergency pay will continue.

“My manager kept me updated for the most part, but really did not have answers because DSW said they were making the decision if emergency pay was going to be continued on March 27,” she said. “It left a lot of me and my coworkers in question if we were going to even have our jobs. My manager told us it may be a good idea to get our unemployment applications filled out if we were depending on our paycheck.”

Eventually, DSW ended emergency pay after March 28. Associates were told they would be placed on an unpaid temporary leave of absence until further notice. This was a very uncertain time for Nhol as she relied on this paycheck for her entire family.

“The unemployment process is really messy,” Nhol said. “They don't make it easy at all. My manager did the best she could in helping me in the process but even she was still confused. This was my first time ever applying for unemployment. I applied for unemployment March 18 and it is now April 14. I still have yet to hear back. I was mailed a debit card with no information, no email, nothing. Luckily I had some stashed away money to pay for essentials but that will only last so long.”

Many people like Nhol are frustrated with unemployment as they are not getting answers. According to the Illinois Department of Labor, Illinois received 513,173 unemployment claims from March 1 to April 4. This total is greater than the number of claims throughout the entire year of 2019 and five times greater than the claims filed in the first five weeks of the 2008 great recession.

“Being in the process of waiting for unemployment has us on our toes. I live paycheck to paycheck with my family so whatever we can get we will be happy with," Nhol said. "We have been back and forth with our landlord on monthly rent options. None of us are working right now. It is a very scary time for us.”

Those who own non-essential small businesses and have had to reduce operations or shut them down completely are also feeling the impact. Since the lockdown many businesses had to close or take a new approach to keep their business from sinking because of the pandemic.

An Associated Press investigation showed that the $349 small business relief fund from the federal government was being abused by large corporations. Seventy-five large, publicly traded companies, such as Shake Shack, Ruth’s Chris Steakhouse and Potbelly – drew money from the fund. The companies later returned the money to the government amid pressure from the media and the public.

How concerned are Americans about their financial future? A good indicator is what they’re searching for online.

According to an analysis of Google search data, searches for unemployment, stimulus, and work from home have all increased significantly since March 9. Searches for stimulus peaked on April 15, just after some of the first stimulus checks were deposited into some Americans accounts.

Michelle Weibe, owner of Hair by Michelle, has been struggling to cope with the financial loss.

“I have yet to receive any stimulus checks from the government. They don’t seem to be communicating with the general population very well. I don’t know when the next time I can have clients come in will be, and that's scary.”

Change.org petitions asking for salons to be awarded with a soft opening (one client at a time) have been gaining traction.

The Illinois Department of Commerce and Economic Opportunity established the Illinois Small Business Emergency Loan Fund. This fund distributes up to $50,000 of low interest loans to eligible businesses. Businesses located outside of Chicago who have less than 50 workers and have less than $3 million in revenue are eligible to apply. Those who receive the funds will have to start making payments after six months for a 5-year term.

For southern Illinois business owners, there is the Downstate Small Business Stabilization Program. The program offers $20 million in loan assistance to private for-profit small retail and service businesses, as well as any business considered non-essential whose employees can not work remotely.

The Illinois Treasurer created the Small Business COVID-19 Relief Fund, an investment loan program that allows for up to $250 million to be deposited to financial institutions around the state.

This money will go to Illinois small businesses and non-profits that have been financially impacted by the pandemic. To qualify a business must have been shut-down or limited by COVID-19, have less than $1 million in liquid assets or $8 million average annual receipts, and be headquartered in Illinois or agree to use the funds in Illinois. These loans have a low deposit rate of 0.01% and will be distributed to financial institutions for a one-year term.

Nohl thinks it is best for the DSW team to stick together to find the best solution.

“As many of us wait for answers, I think the best thing to do is to remain positive,” she said. “Many of us including me are scared because there is no financial security for some of us, but we will find a way.”

What do you think the Illinois government should be doing to help those in crisis? Leave a comment below.