A roller derby pennant from 1940. (Photo via Creative Commons)

Roller derby got its start in Chicago during The Great Depression, just a few blocks south of where DePaul’s Loop campus now sits.

It began as a skating marathon exhibition organized by Chicago dance marathon/walkathon promoter Leo Seltzer in 1935, according to the National Roller Derby Hall of Fame website

These events -- held in the same vein as the dance marathon craze at the time – drew as many as 20,000 spectators at the Chicago Coliseum (right), which once stood at 16th and South Wabash. Seltzer then took the show on the road to dozens of U.S. cities, with people skating on a large, bulky portable tracks. 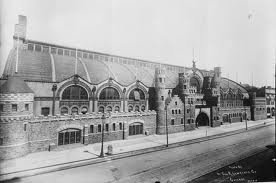 It grew into a popular live spectator sport in the 1940s, and became an overnight TV sensation along with professional wrestling in the 1950s.

The sport continued to thrive locally and regionally for many years, including a national stint on ESPN in the early 1990s.