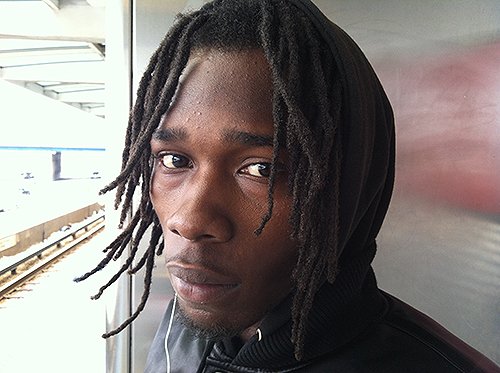 Anthony Trimble, who goes to St. Leo, says the Red Line closure
will affect him "almost all day." (Photo/Michael Collins)

The CTA’s $425 million reconstruction of the Red Line South Branch is being billed as a boon for the city’s commuters.

But for many Bronzeville neighborhood residents, that kind of progress comes at a heavy price.

Starting May 19, service will stop from the Cermak-Chinatown station south to the 95th Street/Dan Ryan station for at least five months in order to replace 43-year-old rails that have slowed service for years.

That closure time has left many in the Bronzeville South Side neighborhood scrambling to find new ways to get where they’re going.

Cyenza Stevenson, a 17-year-old student at Gary Comer College Prep, will now have to take three buses instead of two to get to classes. She said her work commute won’t change however, still just one bus ride.

The CTA’s plan is to use a system of buses to get riders to operational Red Line stops or to get them to the Green Line stop at Ashland/63rd to then board trains.

Woodlawn resident Ernest Gillespie doesn’t like the closure and having to use the Green Line.

“It’s [going to] add maybe 45 minutes to my commute.” he said.  “It’s really going to inconvenience me a lot.  I have to redirect my transportation.”

Peter Schbidler works near the 47th Street station and was unaware of the pending closure of the Red Line.

“Why are they not alternating and doing every other station?” he asked in reference to the recent Brown Line and Red Line North Side construction work.  “That seemed to work, didn’t it?”

CTA officials said that closing the south Red Line all at once will save $75 million and shorten a project that would take four years if done with only weekend closures.

Dan Stuber, a day laborer construction worker from Joliet, will be working on the reconstruction.

“It’s gonna be a good job for a lot of guys,” said Stuber, who added that he’s not sure how long his job will last. The project is supposed to create hundreds of construction jobs.

Forty percent of station construction jobs will be created in accordance with the Disadvantaged Business Enterprise’s goal of hiring more African-American workers, according to the CTA.  About 400 bus driver positions are being created as a result of the project and 100 Traffic Control Aides will be hired at an hourly rate that starts at $18.43.

All this new construction money is of little solace to Camar Moore of Chicago Heights.  She has to travel to the city for meetings for her job.

“If they shut this Red Line down, I’m going to have a hard time getting here,” she said, “because I have to take a bus and it takes like two hours coming from the suburbs.”