By Christian Valdez and Ariana Zambrano |

Melinda McMichael, 33, was exposed to drugs during her teenage years in Chicago and became addicted soon after. She would steal and later go to prison because of the addiction.

A man she encountered had promised her that sex work would be a “faster and easier way to get money.'' She went to work for him.

She never imagined that the promise he made would actually be a life where he would make her have sex with his friends for free, physically abuse her and keep all her money.

“I was getting beaten up [and] raped,” said McMichael, who also worked as an independent sex worker in Chicago for the next 10 years. “And I kinda ran away from that and started working the streets myself.”

McMichael is not alone, her story has been told thousands of times across the U.S. and in Chicago.

In 2012, the US had about 1 million cases of prostitution, as reported by Fondation Selles. Officials say there is not enough research being done to show how many prostitutes are working in the US today.

In Chicago, there are about 25,000 people being trafficked every year, and 70% of those are women and young girls, according to Polaris, an anti- trafficking organization. A 2011 study said that some prostitutes work online, which is safer than working on the streets. Another study conducted by Ronald Weitzer in 2005 showed that 47% of prostitutes that work on the streets have been slapped, punched, and/or kicked, 22% have been raped and 20% have been kidnapped.

Britannica defines prostitution as engaging in any sexual activity with an unknown person in exchange for money or other forms of payment. Human trafficking is when a person is taken through manipulation or kidnapping for the purpose of exploitation, according to the United Nations website.

The United Nations further explain that a person could be exploited through the removal of ograns, sexual exploitation, physical labor, or any type of modern- day slavery. Sexual exploitation may be carried out in the form of prostitution, but not all prostitutes are being forced into sex work. Some people choose to work as prostitutes. Whether a prostitute is being forced or chooses that lifestyle, it is clear that they suffer similar consequences.

Ochoa-Galindo said people who are most at-risk for sexual exploitation or abuse are: foster kids, abused kids, the LGBTQ community, disabled or mentally challenged people, and kids from unstable households. Because a child has become exposed to sexual activities at an early age, it leads to them sexually acting out and putting themselves in unsafe situations, Ochoa- Galindo said.

She also emphasized that households with no parental supervision makes it easier for people to slowly groom young girls and boys into committing acts that could become very traumatic for them. One thing to be clear is that anyone could be abused.

“It can happen to anyone, regardless of the age,” said Ochoa-Galindo, “but these are... the risk factors that increase the risk, or the possibility, that someone can become [a victim of abuse].”

Like McMichael, the women interviewed for this story had their own reasons for becoming a prostitute, and the decisions were not made overnight.

Taylor Holmes, 24, was 19 when she was recovering from an opioid problem. Her boyfriend at the time convinced her to go into sex work. She did it because she loved him, and she thought he loved her.

He made her work in hotels and in people’s houses throughout Chicago, and was trained to know how to act when working or talking on the phone with clients. Holmes was robbed by clients and punched by her boyfriend while he kept the money she earned.

He not only made money off of her, he had other girls who he had individual relationships with and would pimp out, too. Nearing the end of her sex- work, her boyfriend would not allow her to see her mother unless she made a certain amount of money.

“I was missing the concept of, ‘he's using you,’” Holmes said. “I didn’t understand that. I thought that this was normal. I thought that we were trying to save money to, like, have this glamorous lifestyle that he portrayed.” 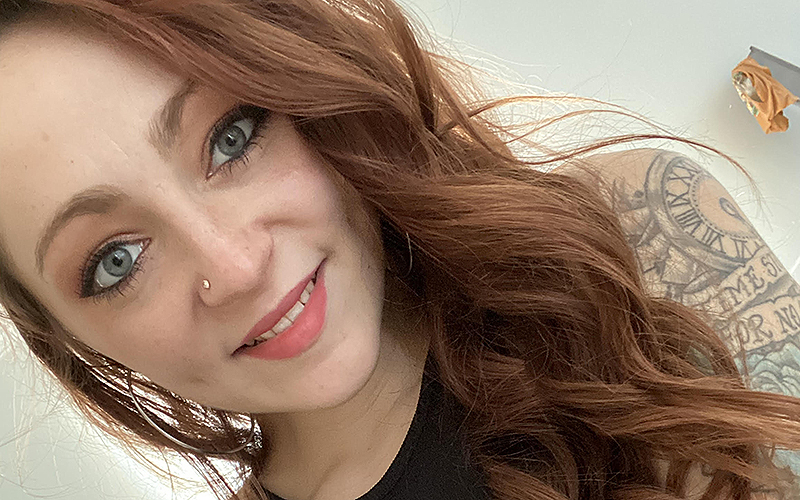 Both of McMichael’s and Holmes’s stories started differently, but have many similarities. They were entered into sex work through someone’s manipulation, reaching them when they were both in a dark and vulnerable place, had low- self esteem, and had no support. Because of this, they have had multiple run-ins with the law for sex work and/or drug possession.

McMichael ran away from home and Holmes’s mother would always be at work, making it easier for them to believe their procurers’ lies about a nicer, finer life through sex work. They both have been exposed to drugs and/or sex at a young age. These are factors that are similar to those described by Ochoa- Galindo about who is most at-risk for becoming victims of sexual abuse or domestic violence.

Ochoa- Galindo said that the healing process and reintegration to society is an important step that abused victims have to take.

Due to McMichael’s criminal record and drug abuse history, the Illinois Department of Children and Family Services (DCFS) took her five children away from her. DCFS took away her sixth child, a son, once she gave birth in 2017. Unable to regain the custody of her five children, McMichael asked for help to stay sober in order to get her son back. She no longer wanted to be a prostitute, but her lack of job skills made it hard.

“This is all I [knew] how to do,” McMichael said. “Use drugs and sell my body to get what I need[ed], and I was just tired.”

Today, she works at Haymarket Center as a recovery specialist and is a birthing and postpartum doula.

“I use my life experience to help women who are me. I feel, like, with the stuff that I’ve been through, that I’m able to be the voice for some women who can’t speak -- who don’t know what to say or who they are,” she said.

Holmes, at one point, was sent to drug court after another run-in with the law, and was ultimately given two choices: go to jail or go to rehab. She decided to get into the Salt and Light Coalition’s year long program, where she was able to heal and talk to counselors about what she went through. It was then that she realized that she was being prostituted by her own boyfriend.

“Through those first few months of being in the program, I started healing,” Holmes said. “I started realizing what I deserved.”

Today, Holmes works for Salt and Light Coalition as a Peer Support Specialist. She got her own apartment, her own car and graduated from the program. Holmes is now a new mom to a newborn son, and is in a healthy relationship.

Prostitution has its stigmas culturally, and is a misdeameaner in the City of Chicago. Both women said that regular people in Chicago see prostitution everyday, but are either naive or choose to ignore it.

Holmes goes on to say, “People aren’t able to process it. Like, ‘You got beat? You got robbed? You were raped? You did what?’ Like, ‘What? You must have did that yourself. You put yourself in that situation.’ People don’t want to understand the reality behind [prostitution]. They just wanna be like, ‘That was messed up. You shouldn’t’ve did that.’

They said that it is mostly women who get arrested, but it is not just the women who are taking part in prostitution. A WTTW news article reported that men who solicit a prostitute’s services are not being charged at the same rate the prostitutes are.

“If you have one bad cop and 99 good cops don’t do anything to stop this bad cop from doing what he’s doing, then you got 100 bad cops,” McMichael said, adding how police officers would bully her while working as a prostitute.

After everything they have been through, McMichael and Holmes have a positive and hopeful view of life. Both women attended the Salt and Light Coalition program and graduated together. They both work on helping other women who have gone through what they went through.

“I turned my pain into purpose,” McMichael said of her job, “I feel like God placed me there. I love my role, I love my job. It’s very rewarding, holds me accountable, and helps me stay clean. I learn something new every day.”

Holmes said, “I realized there’s more to life... I want to just help the world, the environment to be better, I want women to do better. I just want everybody to do better and to know that they can.”

If you, or anyone you know, is being trafficked call the National Human Trafficking Hotline: 1(800) 373- 7888. They offer services 24 hours a day, 7 days a week, and have representatives that speak over 200 languages. 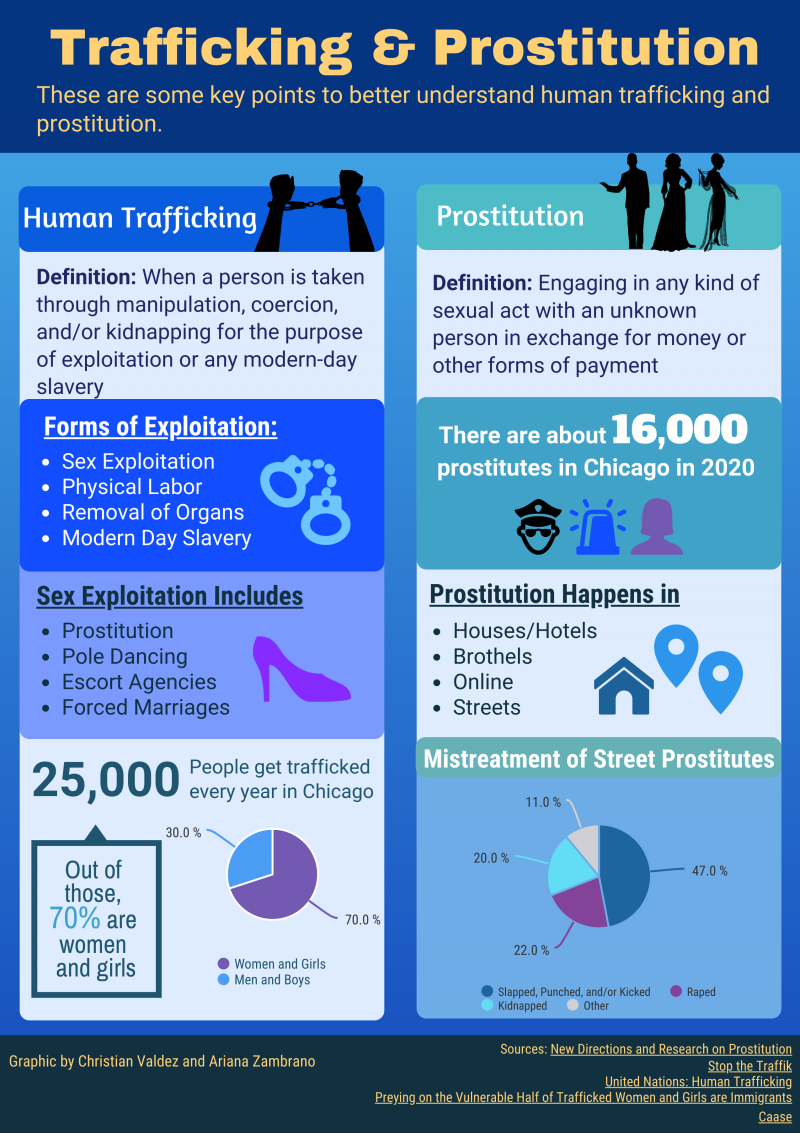