By Sharon Delavega and Brendan Miranda

For decades, Chicago streets have been plagued by potholes located on just about every cross street imaginable.

The issue only gets worse for the city during the winter months, when Chicago has seen a 20% increase in pothole complaints from the past year, according to city data. Some of them still haven’t been repaired almost a year after they were reported, which has the city looking at making changes to its repair process.

According to the American Public Works Association, potholes start to form when water reaches the soil structure of the pavement, causing the pavement to contract. In a summer or winter as brutal as Chicago’s, the thawing of the pavement causes a weakened soil structure, and it’s eventually exacerbated by constant traffic and heavy vehicles.

Angel Medina, a dealer technician at the Berman Subaru dealership in Irving Park, said he’s seen a major increase during the winter.

“During the winter time, the repairs only increase,” Medina said, and the customers sometimes “miss potholes due to the snow.”

He added that potholes can cause serious damage to vehicles, ranging anywhere from a damaged suspension to disturbing vital steering components. Despite some repairs being covered by insurance, Medina said car owners shouldn’t depend on it, adding that “it can add up and become rather expensive.” Medina mentioned he’s seen repairs go from as little as $250, to exceeding $1,000.

For years, Chicago drivers have reported various complaints to the city’s 311 hotline, including potholes streets or alleyways. Since July 2018, over 33,000 complaints made to the city resulted in over 454,000 potholes being patched.

However, as of May 2, 2019, over 6,300 open complaints have yet to be resolved. Some of the unresolved complaints date back as early as July 6, 2018 — this according to an analysis of data on the City of Chicago Data Portal.

When asked about the open pothole complaints, Michael Claffey, director of public affairs for the Chicago Department of Transportation, said crews “usually fill on the order of 10 potholes for every report that we receive.”

Regarding complaints that have remained unsolved for over 140 days, Claffey explained that there are times where the department sees duplicate reports, or at times “the pothole cannot be found and officially closed.”

As for the prioritization of what potholes get filled first, Claffey noted that when crews are out, “they look for and fill other potholes that are found along the way.” But he did not specifically address prioritization.

Despite some of the concerns addressed by Claffey, residents say they are upset, taking to community message boards and neighborhood Facebook pages to complain. Among the angriest are those whose vehicles have been severely damaged.

Alan Valladares, a 22-year-old resident of Chicago’s Brighton Park neighborhood, understands this all too well. When driving in the Archer Heights area last February, his vehicle suffered damage due to a pothole.

“I’m usually very attentive when I drive in areas I know have potholes,” Valladares said. “I always try to swerve around them or slow down so that my car doesn’t get damaged.”

Valladares was simply running errands, hadn’t seen a pothole present, and “the next thing I know, I hit the pothole straight on and I was stuck with a flat tire and my rim even got a little damaged.”

When Valladares asked for a professional assessment of the damages, he found himself staring at an estimate of almost $300. Valladares noted that he “didn’t want to pay that much,” leading him to purchase a used tire for $50 and paying his family friend mechanic $100 to help straighten his rim.

When asked if he reported the damage, Valladares said he doesn’t usually report potholes, citing a lack of knowledge around how to report them as a main reason why.

“I was so angry this time that I decided to Google what to do before reporting it,” Valladares said.

The pothole Valladares was referring to was reported to the city on Feb. 15, 2019, having been reported an additional six times, by other people, until it was eventually repaired on Feb. 28. The pothole recently reappeared on March 11, and was also patched two weeks following complaints.

Potholes aren’t just an issue for Chicagoans though, it’s also a problem for other major cities. However, it’s becoming clear that officials within these major cities aren’t quite sure how to surmount the ever-growing number of potholes that appear each year. 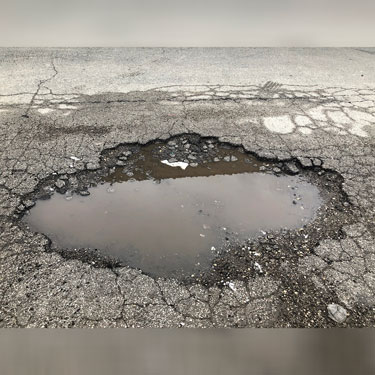 A study conducted by the American Automobile Association in 2013 found that potholes were costing U.S. drivers over $3 billion in annual vehicle repairs, yet according to the proposed city budget for 2019, the crew spearheading city pothole repair only amounts to 2.6% of Chicago Department of Transportation’s $543 million budget.

Chicago will be looking into completely overhauling the way they dispatch crews.

In March, outgoing Mayor Rahm Emanuel announced that within the coming months, the city will be patching more than 310 miles of city roadways, including residential streets and alleyways. The
department has about 30 crews a day focusing on potholes, and
Emanuel spoke of the possibility of adding additional crews.

Claffey said that since 2011, “city forces and utility companies have re-paved a total of 2,165 miles of streets and alleys,” which amounts of almost half of the city’s total 4,600 miles of roadway.

While the city has always encouraged citizens to dial 311 to report
any potholes, it also maintains the CHI311 app for iOS and Android, where residents can make service requests and track their progress. It’s a tool that the city hopes it can drive more awareness to.

Valladares was pleased to hear about the reporting tool, especially with all of the issues a major city faces, with how quick they were able to patch the pothole. His main gripe was rooted in the fact that the city isn’t driving much attention towards ways for citizens to help out with those sort of issues.