Pilsen Gentrification: For Better or Worse?

By D'Angelo Banda and Diego Perez | 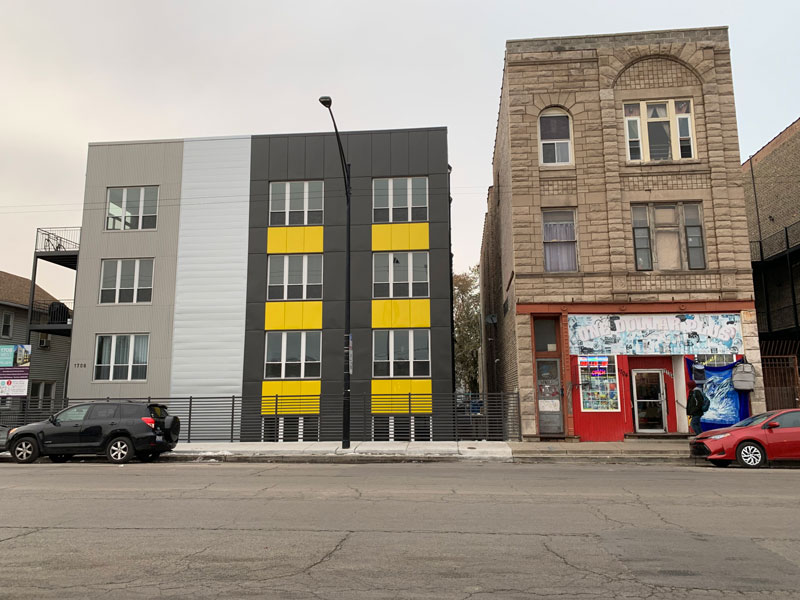 These buildings at 1708 W. Cermak Road illustrate the gentrification in the Pilsen neighborhood. (Photo/Diego Perez)

Terrence Cunningham lives in Pilsen, but not in a home or apartment. He lives in a tent, along with several others, under the I-290/I-294 expressway on Canalport Street.

"We don't have a bed. We don't have heat or air conditioning. We have blankets, tents, and each other. That's it. The cops occasionally stop and give us food or just talk to us, but no one really has offered a home or a job.”

He added, “The people don't care about us. They pass us everyday on their way to work and just look and drive. They don't offer help or even advice.”

Cunningham and others say they’re concerned about changes they see in Pilsen, a neighborhood that has been the focal point of Mexican life and culture in Chicago.

Over the past decades, residents and local organizations have helped to build a thriving community. In recent years, some residents say they have think their community’s values have been tarnished or under-appreciated.

Gentrification has been among a few causes for Pilsen residents feeling left out or moving out of the neighborhood. Renovating older buildings and constructing new luxury housing units have created problems within the community, according to some residents.

John J. Betancur, a professor at the University of Illinois at Chicago, conducted a study Pilsen gentrification and its effects on the community and residents. The study found that Pilsen lost over 25 percent of its Latino population, estimated around 9,955 residents.

“If it continues to gentrify, then every low income Mexican will probably be displaced,” Betancur said. “ The entire population has decreased.”

Apartments and condominiums are listed much higher than what someone with the average household income ($57,769.60) can afford, according to 2017 data from the American Community Survey. Some housing units can range from $250,000 to $750,000 and  higher.

Along with these housing units, different buildings have been renovated for new businesses and attractions. These new additions to the community have raised values of homes and increased property taxes for most residents.

Residents have been left with only two choices: continue paying their much higher property taxes or move out.

Cunningham’s spot under the bridge isn’t the only space that the homeless go to stay. There are several parks, underpasses and crevices where the homeless say.

Pilsen, part of the Lower West Side neighborhood, is  transforming into a much more affluent and booming place to live, but its residents do not necessarily agree with the changes.

Isidro Ruiz Jr has been living in Pilsen for almost all his life. Born in Mexico, he moved to Pilsen at a very young age. Ruiz said he has witnessed every change that happened in his beloved community.

Serving in the military during the '80s, Ruiz returned to Pilsen just in time to witness firsthand the first of many changes to the community and the effects it would have on its residents.

These changes to Pilsen have affected the low-income families. The effects have caused long term Latino residents to leave Pilsen. According to the US Census Bureau, between the years 2008 to 2017, Pilsen's Latino population decreased by 4,937.

The US Census and the American Community Survey estimated the population of Pilsen in 2017 was approximately 78,877. It also states that the Latino population is estimated to be around 41,000 and the white population estimates to be roughly around 37,203.

Although the population is still predominantly Latino, statistics show the white population has increased every year.

The loss of the Latino population may be due to an increase in property taxes, some experts say. This more than likely resulted in residents having to move to a different neighborhood, or lose their homes completely. Finding other affordable housing in Pilsen is extremely difficult due to the effects of gentrification.

According to MetroPlanning.org, Pilsen has a poverty rate of 27%. This is higher than Chicago’s 20% poverty rate.

The US Census tracks the amount of individuals that have left the area of Pilsen and the number of those who are leveling below the poverty line. There is no statistic that records where those displaced families go or how many families have been displaced. It displays the percentage or number of a population in general.

Since low-income families are left with little to no options when displaced, some wind up living on the streets because they cannot afford other housing units in Pilsen. Sometimes it is more expensive to move to another neighborhood.

However, according to Betancur, “homelessness in the Latino community is hidden.”

Betancur says that some Latino families, when displaced, move in with friends or extended family members. They “camp” in their relatives homes until they are able to find their way. By doing this, it is difficult to track this down as a statistic because this poverty is “hidden.”

An organization called The Resurrection Project (TRP) works to “build community wealth.” The organization has helped create many opportunities for different communities across Chicago, including Pilsen. TRP originated in Pilsen when violence in the area sparked community action.

TRP offers an array of services from immigration services to foreclosure prevention counseling. It also offers affordable housing for families in need.

Some residents and community members desire affordable housing as opposed to newly built and expensive apartments. Affordable housing could keep those low income families in Pilsen and possibly bring back some displaced individuals.

When asked for a possible solution to combat the effects of gentrification, Ruiz said, “More affordable housing. Keep our people here, they don’t want to move. I don’t want to move but eventually, I might have to.”

This website helps those in need get back on their feet. This website takes donations to help the homeless in Pilsen with food, clothes, and other necessities one might need in the scorching heat and the freezing cold of Chicago.

If you would like to learn more, read about Pilsen's history.