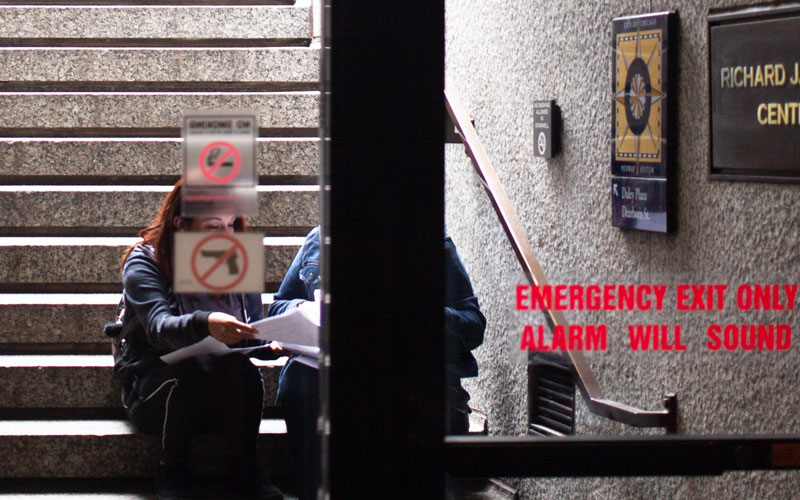 The pedway entrance at the Daley Center. (Photo/Brody Ford)

Against the Grid: Conflicting Visions of the Chicago Pedway

By Michael Gyang and Brody Ford

Centered at the intersection of Madison and State streets, Chicago is laid out on a renowned grid system. Through a structured network of predictability, the grid gives order to the city.

However, beneath this rigid layout is an environment that juxtaposes what's on the surface.

Composed of over five miles of winding tunnels, the Pedestrian Walkway System – commonly known as the Pedway – connects some of the central city’s most important destinations. Though, due to inconsistent accessibility, navigation, and security, the Pedway remains a mystery to most Chicagoans.

“The Pedway has nothing to do with the grid,” said Chicago Elevated tour guide Margaret Hicks. “The Pedway is messy and confusing and curves and turns and it doesn't match the up above at all. And that's so cool.”

The chronically rundown Pedway has been critiqued time and again by local news organizations such as Crain’s Chicago Business. Ever since the Chicago Tribune staff moved to Prudential Plaza, a Pedway-connected building, they’ve been especially keen on critiquing the system. One particularly biting Tribune article pressured a renovation of the Macy’s stretch of the Pedway.

However, amid a pending $12.5 million grant package, it looks like the Pedway may be headed for change. Several groups are advocating for new, sometimes conflicting, visions of the Pedway.

These discussions raise questions about the role of public infrastructure, and our collective vision for Chicago’s future. These were the same questions asked when the Pedway was first under construction.

So, to understand the current status of the Pedway, it’s important to look back at its history. 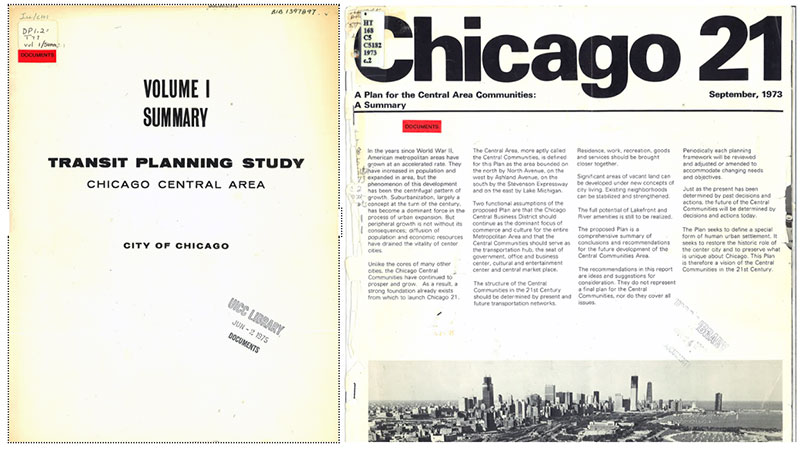 Construction of the Pedway began in 1951 on the tunnel connecting the Jackson Red and Blue line stops. But the Pedway wasn’t part of city policy until the 1968 Chicago Central Area Transit Plan and the 1973 Chicago 21 Plan,

After a century of breakneck growth, 1960 saw Chicago’s first population decrease. Due to federal highway investment and restrictive city zoning, postwar Americans flocked to the suburbs, hollowing out many urban cores.

However, Urban Planners in Chicago recognized that density and centralization made the city strong. Their transit plans hoped to fight suburbanization with an influx of available funding from the Urban Mass Transportation Act of 1964.

They recommended several densifying and pedestrian-friendly policies “aimed toward reinforcing the vitality of Chicago’s core area as the center for employment, education and culture.”

Among these plans included new subway construction, downtown recreational facilities, and a system of enclosed pedestrian walkways -- the Pedway. These all-weather walkways would connect the most important hubs of transit, employment, and civic life, ensuring an efficient and attractive pedestrian core.

Development of the Pedway was sporadic and usually part of a public-private partnership. It’s construction generally coincided with aboveground development, fulfilling the immediate needs of developers. Over time, this created a daunting patchwork character - it was never a centrally planned system.

“The Pedway is confusing and hard to use,” Hicks said. “It’s this sort of unknown thing. So of course it's going to be kind of scary thing. My theory is as long as we know this about it then it's not so bad.”

Inconsistency is part of what makes the Pedway so interesting. Chicago’s long history is illustrated in the walls of the system

The initial phase of development reflected a strong civic focus, connecting buildings like City Hall, the Central Illinois Secretary of State Facility, and even the County Marriage building. This phase stretched into the 1980’s, giving way to more private-based development.

Elite residential towers like Aqua are now connected in the system with office buildings like Prudential Plaza.

“This was a space that was supposed to be about movement, about productivity, and efficiency, you know, it's not that,” said Jonathan Solomon, who operates the Pedway art gallery, Space p11. 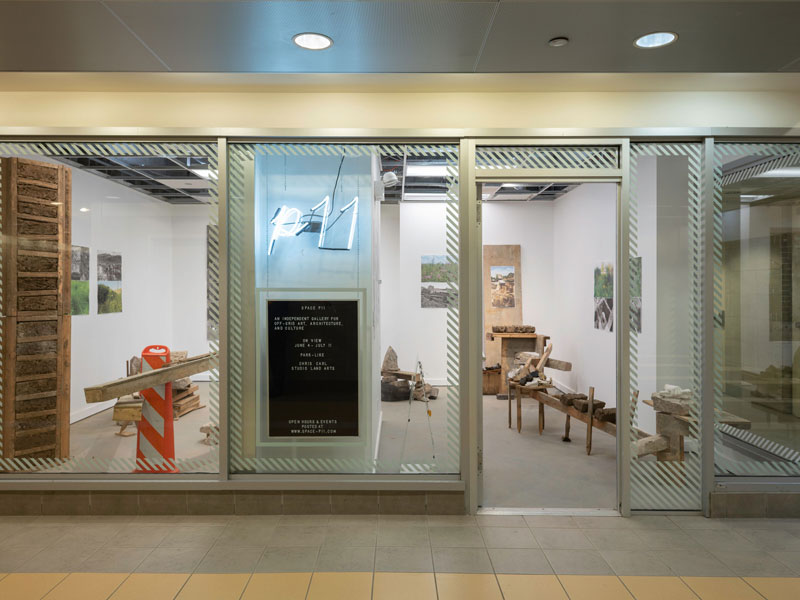 Solomon said focusing on “off-grid art, architecture, and culture,” sees the underground system as a nonfunctional relic. Furthermore, he maintains that the Pedway has more potential as a cultural network than a transportation network.

While Solomon believes the Pedway failed in its primary goal, it has value in its subversion of Chicago’s organizing logic.

“Nowhere else in Chicago can you have the experience of getting lost. When you're down here, the phone is useless, and there's no cardinal, numerical, you know, overlay system to identify where you are. There's actually some value in getting a little bit lost sometimes.”

Historically, the Pedway hasn’t been spoken of as a contiguous entity. Rather, it’s been seen as a means to an end between spaces. However, Solomon’s P11 gallery is part of a growing movement of enthusiasm for this largely forgotten piece of municipal infrastructure. Joining P11 is  the newly relocated Chicago Fashion Incubator, tours by Margaret Hicks and a guidebook by Hui-Min Tsen focusing on folklore in the Pedway.

But a lack of enthusiasm about the Pedway among many in the civic community can be traced to a traditional lack of collaboration channels for Pedway stakeholders. Thus, organizations, and even the City, generally shy away from taking responsibility for the system.

However, one group is hoping to change that. The Environmental Law and Policy Center (ELPC) believes the Pedway can fulfill its initial goal - increasing pedestrian mobility in the city core.

“If people are comfortable walking around downtown, away from traffic and bad weather, they might be more motivated to leave the car at home,” said Julie Jacobson of the ELPC. This goal is in-line with other initiatives of the ELPC, such as providing electric vehicle subsidies and monitoring air for toxins.

ELPC’s mantra regarding Pedway improvement is simple: “Better navigation, better coordination, better activation.” In addition to making the Pedway a more usable public asset, ELPC seeks to make the experience enjoyable and memorable in its own right.

In this plan, the “Main Stem” from Millenium Station to Clark and Lake comes first, passing through the Blue Line, Red Line, and the Macy’s Corridor. Suggested improvements include better signage, retail expansion, space for art displays, and historical info.

Further down the line, they even hope to create a new logo, and get the Pedway added onto official transit maps. All of these renovations, functional and aesthetic, aim to entice more “commuters,  Loop residents, tourists, and others who are downtown for shopping, culture or business” into the Pedway.

It is no secret that the city’s homeless rely on the Pedway, especially in the winter. Jacobson emphasized that the plan shouldn’t push anyone out. But, as stakeholders develop and define the Pedway’s future, they also define who the space is for, and how public it will be.

“Declaring something public or private doesn't necessarily get to the core of the problem," Solomon said in response to whether the space is public or private. "I think that we make space public by occupying it publicly. At the same time, how we police or otherwise monitor our public spaces can make them more or less open to different people.”

While he supported the advocacy work ELPC was doing, Solomon expressed fear of the “mall-ification” of the Pedway, and its possibility of creating exclusionary zones.

“If you connect all the parking lots, with all the offices, with all the nice hotels, you create a space for a specific class of citizen, often a specific race, and you end up with private security, et cetera, you've created separate and unequal spaces. Mike Davis wrote this about LA, there's scholarship about it in Atlanta, as well. I think it's to Chicago's credit that we built an inefficient system that never achieved that level of functional segregation. Especially given how functionally the rest of the city is segregated.”

Yet, the future of the Pedway is still to be foreseen. With potential renovation swirling through its hollow halls, supporters of the Pedway don’t want it stripped of its peculiar charm.

For Hicks, she hopes “it doesn't become a standardized thing between building to building and becomes this uniform white tunnel that we all move through...I want it to be easier for people [to navigate] but I don't want it to lose its strangeness and its mystery.”