Fazal Asmani sells discount T-shirts and other dollar store fare out of a storefront on Devon Avenue. The bearded man leans back comfortably in a chair behind the cash register. He generously shares his political opinions but he refuses to have his picture taken.

“People here make something out of nothing,” he said, complaining about his neighbors.

Asmani said he is very conscious of who is seen coming and going from his shop.

The center of the Pakistani-Indian enclave in West Rogers Park lies at the intersection of Devon and Western Avenues.

Here mannequins dressed in colorful saris pose in many of the store windows and children could be seen playing cricket, rather than baseball, at the local sandlot. The area is as diverse as any Chicago neighborhood, with many Hispanics, African Americans, Orthodox Jews and Russians also living there.

Business owners and shopkeepers interviewed in Chicago’s Pakistani community say they are grateful for the opportunity to make a living and support their families in the United States. They say they are suspicious of strangers but not unkind to them.

Ten years after 9/11 this immigrant community endures a relationship of mixed gratitude and mistrust of their new American home.

From behind the counter at the Baba Corner convenience store, Kalim Ahmed warned that talk about the killing of Osama bin Laden by American Navy Seals in Pakistan is a “risky topic.”

Ahmed arrived in the U.S. several years after 9/11, but he remembers it clearly.

“I was working” when the World Trade Center was attacked, he recalled. “So many people died.”

Seventeen-year-old Owais Zesai has only vague memories of the September attacks.

Zesai was on Devon Avenue taking part in a religious procession. The men in the procession chanted and thumped their chests as they marched west from Leavitt Street. toward Western Avenue. They were marking the somber anniversary of Imam Ali’s martyrdom on the 21st of Ramadan. This is a particularly significant date to Shi’a Muslims.

The Islamic holy month of Ramadan fell entirely within August this year. Thirty days of prayer and fasting on the run-up to the 10th anniversary of 9/11 gave the atmosphere on Devon Avenue a curious edge. For example, many of the area’s famous Pakistani-Indian restaurants observed Ramadan and closed during daylight hours, when Muslims are not permitted to eat.

George Metry is an Arab Christian from Egypt. He owns and operates the Habbi hookah lounge, bringing a little of his Middle Eastern culture to the young urban professional demographic who fill most of the lounge’s cushy oriental furniture.

“People that… live in the Middle East found out it’s only divided [into] two levels: very rich and very poor,” Metry said.

Metry’s views are tinged by the cautious optimism of this year’s Arab Spring in the Middle East. He credits the Internet for the sweeping changes. So far, he said he is very encouraged by what is happening in Egypt. It makes him proud to see people in the Middle East aspiring to a better life.

Arabs seeking a better life in the United States will also find on Devon Avenue what Rogers Park resident Tony Maldondo describes as “a climate of nervousness when people have to drive through here.”

Maldonado said he has observed drivers casting suspicious looks from their cars as they pass through the neighborhood. bin Laden’s death this past May have given old tensions a new relevance. 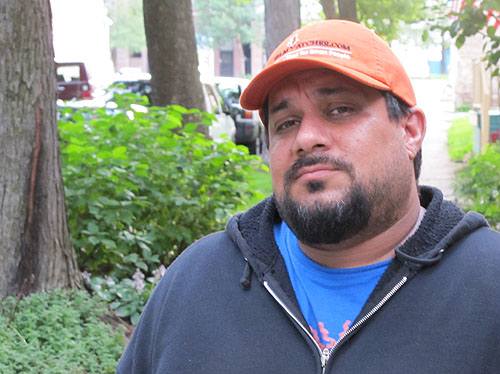 Tony Maldonado lives in Rogers Park, near the Devon Avenue business district.
He says he has noticed tension in the neighborhood. (Photo by Len Kody)

Metry saw the news about bin Laden break while he was working at his hookah lounge. Metry said he was happy about it. He thinks something should have been done about bin Laden much sooner.

“He should be gone before even Saddam Hussein,” Metry said.

“It happened in my country,” he said, referring to Pakistan.

Asmani said he is skeptical that the general public is being told everything about the mission to eliminate bin Laden. He said he thinks bin Laden’s death just gave the United States a “good excuse” to pull out of a war that was not going well in Afghanistan. He claims to have heard rumors that bin Laden has been dead for a long time. And he has heard other rumors that bin Laden is still alive.

“God knows,” Asmani said, throwing up his hands at the complex politics that have enmeshed the United States and the Middle East these last 10 years.

He then returned to a sentiment shared by many people interviewed along on Devon Avenue -- gratitude to be able to live and work in a country with a little more freedom and opportunity than the one left behind.

Next story: Don and Pat Shanower