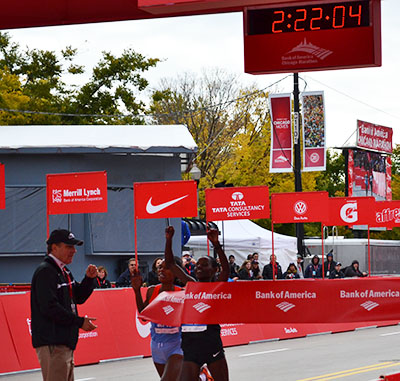 Three-time defending champion Liliya Shobukhova of Russia could not make it four in a row at the Chicago Marathon on Sunday.

Atsede Baysa of Ethiopia edged Kenya's Rita Jeptoo by one second at the finish of the women's race, making it a sweep of the men's and women's races for Ethiopia. Baysa's winning time was 2:22:03. Lucy Kabuu of Kenya was third in 2:22:41.

Baysa and Jeptoo dueled in the final mile, twice exchanging the lead. Baysa took over the lead before making the turn into the final straightaway, but Jeptoo stayed right on Baya's right shoulder all the way to the finish line.

Speaking through an interpreter at the post-race press conference, Baysa said she when she was near the end she was just running and was happy to win the race.

At one point, Jeptoo was asked if she knew she would not be the winner. She said she knew she came in second because of the signal of the hand flag. When she saw the flag go down, she knew it was for Baysa.

“I was happy because I [came in] second. I finished very fast so I am happy,” said Jeptoo, whose time was a personal best.

Kabuu, who was dealing with a nagging injury while training, said, “I was happy because I prepared myself for this race just a month.”

Shobukhova, who was nursing a sore hamstring, was fourth. It was her first marathon in a year. She would have been the first woman to win the Chicago Marathon four consecutive times.