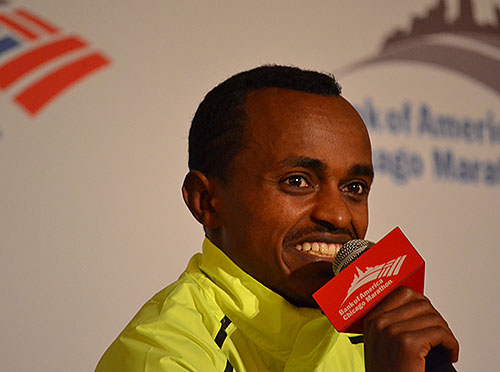 Tsegaye Kebede is all smiles at the post-race press conference. (Photo by Mike Chamernik)

The Kenyans had a good run.

But the country’s Chicago Marathon win streak of nine consecutive races is over. Ethiopia's Tsegaye Kebede outran, outhustled and outlasted all competition – over 30 elite men’s runners and 38,000 total participants – to win the men’s marathon with a course-record time of 2:04:38.

Kebede, 5-foot-3 and  25 years old, is the first Ethiopian to win the Chicago Marathon. Ethiopians rounded out the top three, as Feyisa Lilesa placed second (2:04:52) and Tilahun Regassa (2:05:27) was third.

“It’s a great day for us, for Ethiopians,” Kebede said. “It’s very important for us.”

Kebede did not lead the race wire-to-wire. He was 12th at the 10-kilometer mark and fourth at the halfway point. But, from 25 kilometers on, Kebede led the race. He also led at every mile checkpoint from the 17th to the end, and posted four consecutive sub-4:38 miles after the 13th mile,

With his back perfectly upright, and his arms and legs furiously pumping, Kebede separated himself from the pack in the second half.

“When we passed halfway, it was too slow of a race,” Kebede said, adding that he pushed himself harder after the pace-setters dropped out after the 16th mile.

Despite winning his fifth major marathon, and earning a bronze in the event in the 2008 Beijing Olympics, Kebede was left off the Ethiopian team for the 2012 Games. When asked about his country’s decision, Kebede took the high road. “I don’t know,” Kebede said, with a smile. “They choose, you know?”

Kenyan runners finished in spots four through seven, and two more Ethiopians ended up in the top 10. The top American was London 10,000 meter Olympian Dathan Ritzenhein, who came in ninth with a personal-best time of 2:07:47.

By topping the Kenyans, Kebede also beat Wesley Korir, the winner of this year’s Boston Marathon and one of the favorites to win Sunday’s competition. Korir finished fifth with a time of 2:06:13, more than 90 seconds behind Kebede.

Korir started strong, but was never in the top-four at any 5-kilometer split. Over a dreary Chicago morning, the Ethiopian trio simply overpowered the 29-year-old Korir, who said he fell off a little when the pace-setters departed.

“It was really a fight,” Korir said, “mentally and physically, to be able to stay with them, and to be able to maintain the same pace. Those guys did a great job, they ran like champions today.”

Korir and Kebede had a common enemy during the race: a numbing cold spell the arrived in the city a few days prior. The temperature hovered around 45 degrees, and the wind swirled just enough to make it feel a few degrees colder. 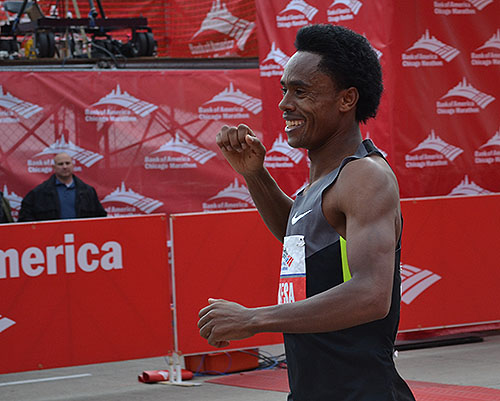 Executive Race Director Carey Pinkowski said he believed that the conditions could have been beneficial for runners, citing Steve Jones’ back-to-back marathon wins in 1984 and 1985. Temperatures were in the mid- to low-50s in each race.

“Other than the last five years when we’ve had unseasonable warm temperatures,” Pinkowski said about October in the city, “this is what Chicago’s been known for.”

But the elite runners, many of whom hail from Africa or South America, aren’t accustomed to the climate.

Korir overcame cold, but did not defeat Kebede. The new record holder proved his worth Sunday.

“I think this re-establishes his dominance,” Pinkowski said of Kebede. “Him not going to the Olympics set him back a little bit, but I think he took that disappointment and, as all great champions do, he refocused and sent a strong message to the marathoning world that he’s still a force.”

For more times and finishers, go to the official results page.