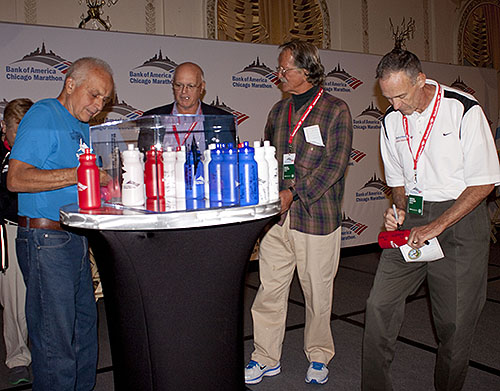 Among the 45,000 people who will participated in last year's Chicago Marathon, an exclusive group of nine did it for the 34th time -- every year since the event started in 1977, when Jimmy Carter was in the White House.

This aging but energetic runners were honored for their dedication during Thursday’s pre-race press conference for the world’s second-largest marathon.  All nine men – graying but undeterred -- were present and received a handshake from Mayor Rahm Emanuel at the end of the event at the Chicago Hilton.

“Getting this attention at our age, it’s not bad,” said Dan Skrzypczynski, one of the nine runners.

Race officials have given those runners celebrity treatment over the years. They have given the runners pizza parties, waived their entrance fees since the 20th anniversary, and one year, even hung posters of them throughout the city as promotional ads for the race.

“It’s amazing,” said race director Carey Pinkowski. “Trying to be in the same place at the same time 34 years in a row. It’s a testimony to commitment and sacrifice.”

And there have been some sacrifices. Larry Moon, 71, of Chicago, talked about how his son was nice enough to push his wedding back a few days so that his father’s marathon streak of running in Chicago wouldn’t be broken.

Running and finishing the race are admittedly getting harder as the years creep by and age takes its toll. Between lingering meniscus issues, hip discomfort and general soreness during training and recovery from the race, the process is becoming more difficult, the runners say.

“I go out and run and see walkers pass me up.” Moon said with a laugh.

To most of the men, it is more important to finish the race at this point than to get a fast time.  Some joked about just trying to beat the street sweepers that clean up once the event is over.

The group’s numbers will continue to dwindle this year as at least one white-bearded alumnus will be watching from the sidelines on Sunday. Most of the runners, however, are excited to go and grind out the 26.2 mile course for the 35th time.

One thing that keeps these men enthused about coming back every year is the camaraderie that has been built among them over the years. Once things died down at the press conference, most of the runners hung around the stage and continued to laugh, joke around with each other and exchange stories about exercising. They also discussed the possibility of having a reunion sometime during the winter so that they wouldn’t have to wait until next year’s race.

A lot of the guys consider themselves more as casual participants than serious runners, so the question was raised, “What keeps you coming back every year?” 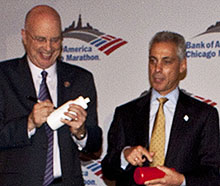 The One Percent: Emanuel (far right with Pinkowski) attended the pre-marathon press conference Thursday to thank marathon officials and sponsor Bank of America for a $250,000 donation to the Wounded Warrior Project veteran's charity as part of the race. But in doing so, the mayor took a thinly-veiled swipe at both Republicans and the Occupy protestors.

“There has been a lot of debate about the 1 percent in this country," Emanuel said. "But the true one percent are the people who signed up [for military service]. It's not a person of wealth who defines the one percent. It's those who have served ... and have scars from that [service].

Veteran Generosity: Bank of America, the primary sponsor of the marathon, was promoting its plan to donate up to $250,000 to the Wounded Warrior Project, which benefits injured American war veterans. The company will donate one dollar for every Chicago Marathon water bottle signed, and also for every message or photo of thanks labeled with #troopthanks on Instagram or Twitter.

The bottles will be organized into a mosaic on display at McCormick place, and the final mile of the marathon will be decorated to honor America’s soldiers and veterans.

International Flavor: The marathon draws a lot of international competitors, and with them come a lot on international media.  Thursday’s pre-marathon press conference included a two-person crew from Vienna talking to three men with African accents, and a woman yelling “Como estas,” to a colleague.

Quick Hits: NBC 5 and WSCR 670 The Score Sports Radio will broadcast the marathon from 7 a.m. to 11 a.m. on Sunday … Updates and results will be posted to ChicagoMarathon.com during and after the race. … The race will pass through 29 Chicago neighborhoods. … Temperatures are expected to be in the lower 40s for the start of the race with highs for the day in the low to mid-50s. … The race will start at 7:20 a.m. with the wheelchair division, followed at 7:21 by the handcycle start. Elite runners will start at 7:30, followed by two waves of runners – 45,000 in all -- passing through the Grant Park starting area. ... The marathon trophy, etched with names of past men's and women's winners, was on display at the back of the press area.