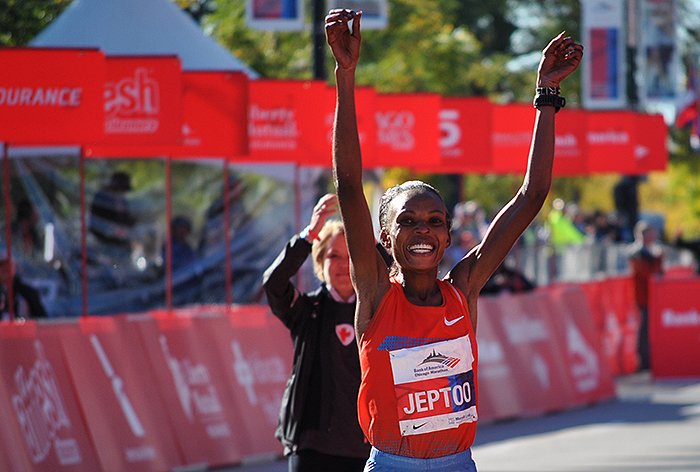 It was a day of redemption and celebration for Kenya’s Rita Jeptoo as she won the women's division at the 2013 Chicago Marathon.

Jeptoo, 32, who was the runner-up in a tight finish last year, proved on Sunday she was not going to be denied for a consecutive time. She showed it with a strong performance, capping it off with a personal record of 2:19:57.

Jeptoo became the 18th runner to break the sub-2:20 mark, and it was the fastest time in the world for a woman marathoner this year.

“My race was very, very nice,” she said during the post-race press conference at the Chicago Hilton. “The weather is good. Last year I was not ready to win, but today I really happy to win and to be here in Chicago.”

Jeptoo did not take the lead until she was near the 17-mile mark. As she approached the 30-kilometer mark, she found herself in a close race with fellow Kenyan native, Jemima Sumgong Jelegat. Spectators watched closely as the two women ran side-by-side in what was shaping up to be another exciting finish.

Jeptoo, however, got stronger as the race progressed and pulled away, at one point building a seven-second lead over Sumgong Jelegat during the final few miles.

“I was feeling strong,” she said. “I had confidence and energy to go.”

It was a very emotional victory for Jeptoo as she was overwhelmed with tiredness and joy, at one point falling to her knees and dropping her head to the ground. Immediately after she crossed the finish line, she went to hug her coach and the rest of her team waiting to congratulate her.

When asked if the second place finish in 2012 was a motivating factor in her victory, Jeptoo said it played some part.

“Last year I was maybe not ready,” Jeptoo said. But this year I was very ready. This year I was with my friends so I knew everyone was strong. My colleague Jemima trained with me, so I know Jemima.”

Despite not winning the race, Sumgong Jelegat and Konovalova said they were both satisfied with their performances on Sunday.

“For me I’m very happy,”Sumgong Jelegat said. “Today’s race was very good for me. I’m not disappointed. I’m very happy about it. Very satisfied.”

Video
Rita Jeptoo won the 2013 Boston Marathon just more than an hour before the terrorist attacks. Read what some Chicago runners experienced in Boston.

Konovalova, 39, who was the oldest runner in the Women’s elite race and a thyroid cancer survivor, also set a personal record with a time of 2:22:46, shattering the previous record she set at the Chicago Marathon in 2010, by one minute and four seconds.

“I have competed so many years in the sport already so sometimes it is difficult to have a lot of emotions,” she said. “But now for next year, I have a new goal to get a world record.”

Baysa looked strong early and led the field at the 25-kilometer mark, however, the possibility of seeing a rematch at the finish line between her and Jeptoo did not happen.

Baysa dropped back and could not keep up with Jeptoo this time. She finished fifth.

This is the second marathon victory this year for Jeptoo, who won the Boston Marathon this past April.  However, it was overshadowed by the terrorist attacks.

2013 has been a career year for Jeptoo, dominating the competition and setting not only personal but world records.  She credits her recent success to why she was so emotional after winning the race.

“I am really, really happy,” she said. “After 2009, when I won in Boston, I was not doing great. But doing this year and last year I am doing really, really well. So when I ran Boston again I saw my dream was coming. So it was my happiness.”