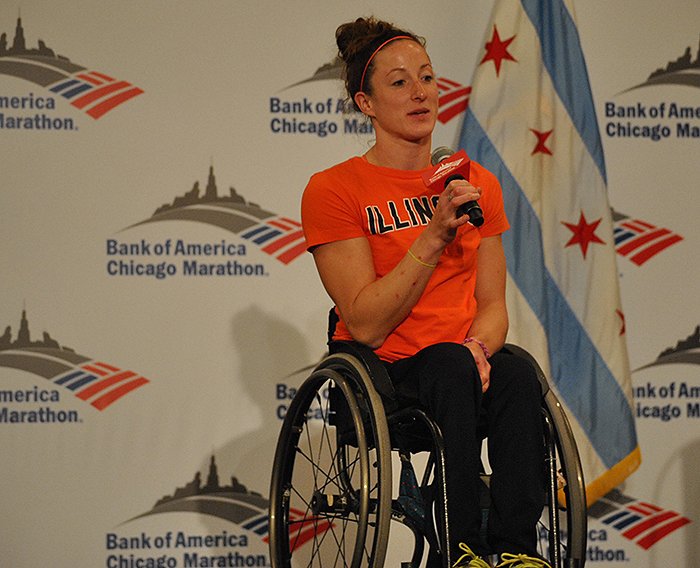 It came down to a photo finish as Ernst Van Dyk won the men’s wheelchair race, edging out Kurt Fearnely by only a second to claim his first Chicago Marathon victory.

Joshua George, a Champaign native,  finished third, posting the same time as Fearnely. He missed being the runner-up by tenths of a second.

Both men were neck and neck as they headed down the final stretch, while spectators watched with excitement and cheered them on. It was Van Dyk though who was able to dig a little bit deeper and will himself to the victory.

“Right at the end, it was clear nobody was going to get away,” Van Dyk said. “It was going to be a stretch finish and I became really tactical in the last 5k.”

This is Van Dyk’s second appearance in the Chicago Marathon as he came in fourth in 2010, after suffering a mechanical issue midway through the race.

This past spring, Van Dyk was runner-up at the Boston Marathon, where he has won a record nine times, and also took third-place in London.

However, the more impressive showing might have been in the women’s wheelchair race as University of Illinois student and defending champion Tatyana McFadden won her third consecutive Chicago Marathon.

“Looking at the finish line, all I saw was the red tape and I was just going after the red tape,” she said.

This is McFadden’s fourth win in the last five years and she moves on to the Nov. 3 New York City Marathon aiming to become the first athlete to win four major marathons in the same year.

McFadden was followed closely across the finish line by first-time Chicago competitor Manuela Schaer of Switzerland (1:42:38) and her University of Illinois teammate, Amanda McGrory (1:42:55).

“There was a little bit of pressure because I was going for the Triple Crown,” McFadden said. “I got the Triple Crown today. That means for New York I’m going to go for the Grand Slam.”

At the post-race conference, McFadden’s victory did not go unnoticed by Van Dyk as he was asked what he thought of her performance as well.

“It’s really a unique achievement,” he said, “I think she is setting it up for a record that will take a long, long time to get broken.”

How do runners recover after 26.2 miles?

Medical report: There were approximately 750 runners who required medical attention, race officials said. Twenty-six of those runners were sent to local hospitals, but medical staff said no one was in critical condition. 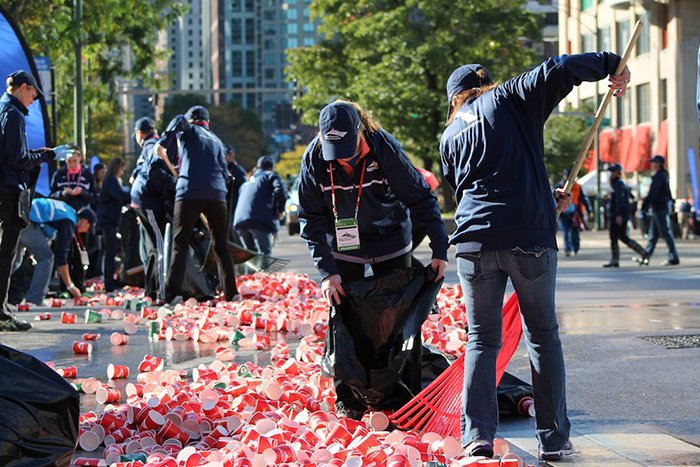 Volunteers clean up cups downtown near the end of the race. (Photo/Ali Trumbull)