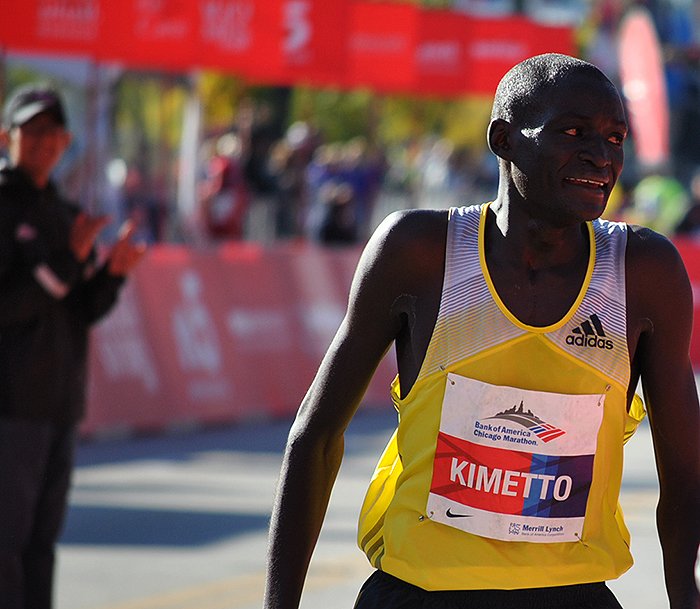 Dennis Kimetto ran away with the Chicago Marathon on Sunday. Not bad for a man who was a farmer in Kenya with no organized running experience four years ago.

Kimetto finished with a time of 2:03:45, a new course record. Kenyans took the top four spots in the race. Emmanuel Mutai finished seven seconds behind, Sammy Kitwara came in 1:31 back, and Micah Kogo crossed the finish line 3:11 after Kimetto.

With about eight elite runners racing in a group behind a pace-setters for the first 15 miles, the four Kenyans emerged from the pack and were neck-and-neck at the 35-kilometer mark. A little later, Kimetto and Mutai were separated by a second at 40 kilometers and ran away from the pace-setters.

Kimetto pulled away for good with about two miles left. At a water bottle station, Kimetto picked his up without issue, but Mutai fumbled his. Mutai insists that the botched bottle grab did not cost him the race.

“The bottle was not a problem,” Mutai said. “I was a bit tired, but I was trying to close [the gap], but I could not make it.”

Kimetto was unaware of the bottle snafu, and he also didn’t know about the prize money or even the time of his run until the last moment. “[I] literally paid attention to it right at the end,” Kimetto said through an interpreter, “when [I] got to the finish line [I] saw that he got the course record.”

He is just a few years removed from farming for a living, growing maize and tending to cows, Kimetto said through an interpreter. He was running and training on his own and met a fellow Kenyan named Geoffrey Mutai, a long-distance runner, in what Kimetto called a “chance meeting.” Kimetto joined Geoffrey Mutai’s training camp in Eldoret, Kenya.

Kimetto, 29, also is getting over a bout with malaria. He said that he was feeling ill after running in France two months ago, and was diagnosed with the parasitic disease. For the last six weeks, Kimetto’s condition has been improving.

“I definitely struggled the last five miles, and had some of the same problems I’ve had in other marathons,” Ritzenhein said. He said he felt his hamstring starting to cramp about 18 miles in, and a few miles later the pain worsened and he began to slow down a little to get the pain under control.

Last year’s champion, Tsegaye Kebede, did not participate on Sunday. He ran in April’s London Marathon and will run in the Nov. 3 New York Marathon. 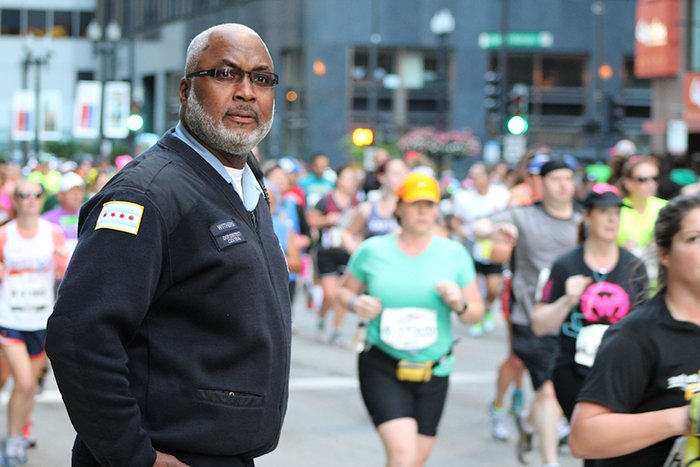 Race Security: Security was very tight Sunday due to April’s bombings at the Boston Marathon. Large groups of officers roamed the start and finish line, bags were searched and bomb-sniffing dogs were in full force. City officials closed off roads near the finish line using snow plows, and only ticketed fans were allowed in the grandstand area.

Race officials and CPD confirmed late Sunday afternoon that there were no security incidents related to the marathon.

“I had full confidence that the people here at the Chicago Marathon would do everything they could to make sure that we were all safe,” Ritzenhein said. “There were tons of law enforcement out there and everyone was vigilant. You could tell the difference from last year.”

Fast Track: Chicago’s route is known for being a faster course as compared with places like London. Mutai said that London has “a lot of ups and downs,” while Chicago is flatter. Add to that, Mutai said that Sunday’s weather was very conducive to long-distance running. Executive race director Carey Pinkowski estimated that Chicago’s course is 45 seconds faster than London’s.

Windy City, Indeed: Though it was sunny with temperatures in the 50s, not everything about the weather was ideal. “The wind out there was tough today,” American runner Matt Tegenkamp said. “It never felt like you got any tail wind. It always felt like it was in your face. So, the performance that was put out there today – a world-record effort – was really, really impressive.”

First Time, Long Time: Tegenkamp finished 10th with a time of 2:12:28. This was the first marathon that he competed in, going as high as 25 kilometers in the 2013 US Championships. Though he enjoyed the enthusiastic crowd cheering him and his teammates on, he did like how the crowd thinned out at Mile 14. “You could just kind of relax and take a breath and really just start getting dialed in on the task at hand,” Tegenkamp said.

Wrigley Field Can Hold Them: More than 45,000 people registered to run in the race, and a record 40,230 actually did, up 2,200 from last year. Pinkowksi has been the head marathon director since 1990 and he has seen the race grow. “I’ve always felt we could create a world-class event, and the city has really embraced it,” Pinkowski said. “You saw the crowds out there today, it was just amazing.”

He Made It: Maickel  Melamed, a 38-year-old Venezuelan man, was the last person to finish the marathon, arriving at the torn-down finish area after 1 a.m. Monday. It was 16 hours and 46 minutes after he started the race. Melamed has a rare condition that limits his muscular strength, but he has finished three marathons -- New York, Berlin and Chicago. 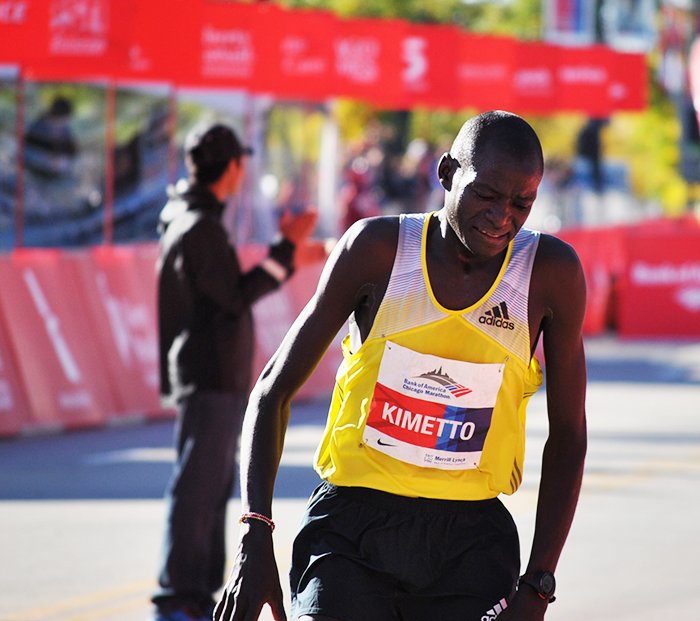