By Rafael Rodriguez and Diego Perez |

Chicago residents have seen some neighborhoods change in front of their eyes.

Once a home to various street gangs, Lincoln Park is now a thriving community home to young professionals and Pilsen has been undergoing many changes over the last few years. Humboldt Park, rich in Puerto Rican culture, has begun to see a shift in its community.

Gentrification has noticeably affected Pilsen, Lincoln Park, and other neighborhoods around Chicago. From constructing new, expensive housing to entirely changing the landscape of a community, the process of gentrification has both positive and negative effects.

"[Neighborhoods] were not being gentrified like we think of them now, but there were efforts being put in place to get reinvestment, private investors" Smith said. "The city was doing a lot to encourage the middle class to stay there, pushing out Puerto Ricans from particularly the Old Town neighborhood."

Humboldt Park residents are beginning to see these effects firsthand.

Tom Tomek , a realtor who has been a property manager and landlord in the West Town area for 25 years, has sold and has helped sell many properties in all the Chicago neighborhoods, including Humboldt Park. While Tomek has dealt with many properties listed at different prices he has seen a few but hasn't been involved in any big priced home or condominium deals yet in Humboldt Park.

When asked if Humboldt Park would become similar to what Lincoln Park is today he said, “I absolutely think it stands a very good chance. It is because of the architectural integrity, close proximity to downtown and nearby transportation lines that drives the interest in these neighborhoods.”

Smith added that Humboldt Park could potentially reach a level of gentrification like Lincoln Park but possesses more challenges due architectural conditions.

“Architecture matters as well as location,” she said.

Long-time residents of Pilsen have seen new construction and residents moving into their community because of new housing constructions, close proximity to downtown Chicago, and it is very close to the University of Illinois at Chicago (UIC). Humboldt Park shares similar characteristics as to why it has been seeing a rise in new residents.

However, those new tenants may be hurting the long-term residents, experts say.

Like many neighborhoods in Chicago, Humboldt Park contains historical structures and buildings that have a rich history. New construction of different housing properties along with the rebuilding of old buildings and turning them into luxury housing units may change the community’s culture which is why some residents oppose these new operations as well as gentrification.

Martha Gines, a Humboldt Park resident, has witnessed all the changes that her community is experiencing which is affecting her own home. Due to new housing units being built, she claims that everyone living in that area will see an increase in either rent, mortgage, or property taxes.

“My mortgage has gone from $2,000 to almost $3,000 just this year,” she said. “Also, our taxes tripled this year. We noticed [increases] happens every time a new condominium is made.”

American Community Survey data from 2013-2017 shows that the Hispanic population makes up about 56 percent of Humboldt Park while White/Caucasian makes up about 6 percent.

Gines said that since most houses and apartments are occupied by Hispanics, it will eventually be difficult for them to continue living if their rent increases. Not only that, but she claims property value of homes increase because more white people are moving in.

“Increases start to happen as soon as new condos and constructions go up,” she said.

When asked if taxes and rent prices go up every year, Gines responded “It happens non-stop. This is non-stop.”

Ald. Roberto Maldonado (26th Ward) oversees the Humboldt Park neighborhood and various others since 2009. According to his website, Maldonado has constructed new affordable housing units for Humboldt Park residents that have been displaced or have lost their homes due to rising costs of rent prices as well as property taxes.

Some residents in Humboldt Park want to see new construction in their area but not housing that is extremely above the income level of the neighborhood. Residents want to see the neighborhood increase in value but not at the cost of the community losing its people and culture.

“That cultural aspect about who we are does not exist anymore,” she said. “Humboldt Park is really beautiful but that sense of community is no longer there.” 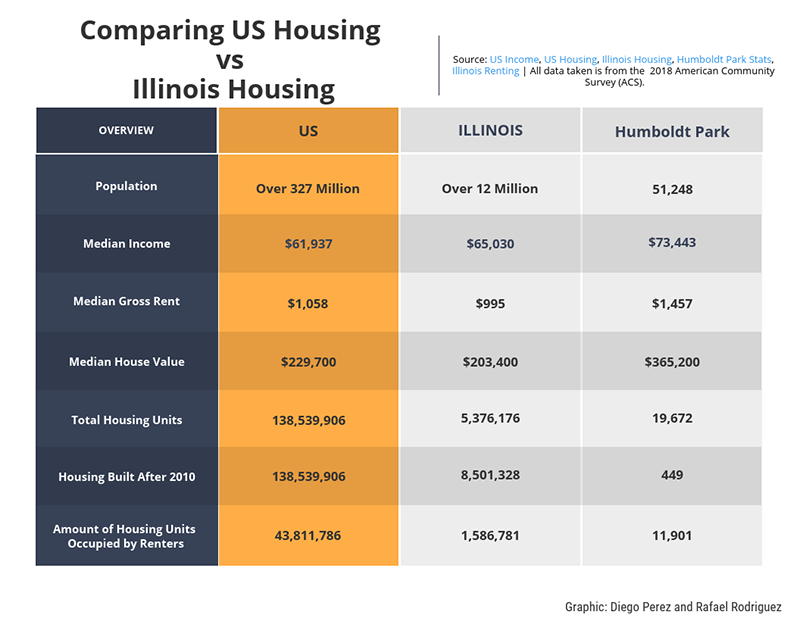