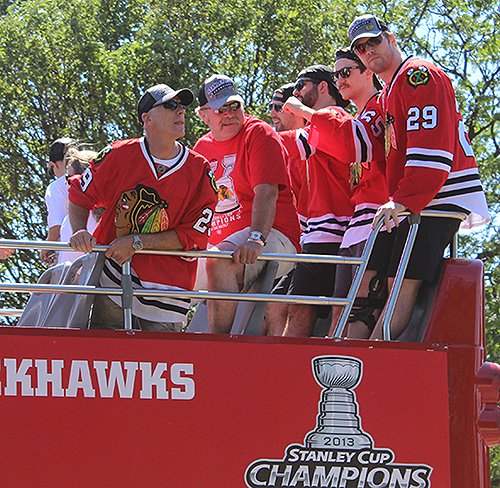 Bryan Bickell (29) and his teammates on the way to Grant Park.
(Photo/Jakub Rudnik)

As calls of dehydrated fans and other heat-related issues had police scanners buzzing during the parade and rally, Salvation Army volunteers were stationed outside of Grant Park handing out 100,000 bottles of water. Chicago Police also tossed bottles of water to fans while they waited for the rally to start.

Bottles of Dasani were stacked on tables and tossed to passersby as workers called, “Free water,” to skeptical Blackhawks fans.

While the Salvation Army asked for nothing in return, one person took advantage of their good will, taking numerous and selling them to those entering the park. “You can’t really steal something that’s free,” said one volunteer.

“I told [a volunteer] I stopped him from doing it, he says he just works for the company, he’s just doing what they told him to do,” said Raymond Hall, who was working security. He added that the only thing he could do was point out the man to police.

As predicted, the rain showers forecast for Friday held off until late afternoon and early evening. Temperatures were in the 70s in the shade but were much warmer than at Grant Park, as Hutchinson Field doesn't have any shade.

According to USA Today, Chicago Fire Department spokesman Larry Langford said 42 people were taken to hospitals with heat-related health problems. Twenty people jumped into the restricted area of Lake Michigan, according to Langford, and the fire department saw to it that all 20 came out of the water safely.
In addition to the 42 people taken away in ambulances, 49 more were treated by paramedics. Most of them suffered from heat-related symptoms, according to Fox News Chicago. – Jakub Rudnik and Steve Wojcik 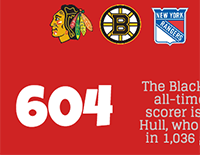 What does the Blackhawks' fifth Stanley Cup and second in four years mean from a historical perspective? Find the answers in the Blackhawks by the numbers interactive infographic.

Mayor's Statement
Mayor Rahm Emanuel, who was on board one of the double-decker tour buses that shuttled Chicago Blackhawks players, coaches, family and friends and many others, spoke briefly at the Grant Park rally and released a statement:
"More than two million Blackhawks fans showed their passion and enthusiasm today as the Blackhawks paraded the Stanley Cup from the United Center through the Loop to Grant Park. As many of the Blackhawks noted from the stage, Chicago has the best fans in the world. We saw that yet again as our city came together for a celebration that every member of our community could take pride in and enjoy." -- Steve Wojcik

Few Arrests
Police did not announce a number of arrests at the rally, but early indications that were there were few.
One major arrest was made at the 100 block of North LaSalle Street around 10 a.m. Friday. According to several reports, a Matteson man was found to be in possession of two handguns, one in a backpack and one on his person. The Chicago Sun-Times have identified the man as Roger Harrison, 37. Harrison has been charged with two counts of unlawful use of a weapon and one misdemeanor count of cannabis possession, police said. -- Steve Wojcik

Quotable
"We know the Blackhawks have the best fans in the World, now you know you've got the best hockey team in the world." -- Pat Foley, Blackhawks play-by-play announcer

"Remember, Chicago. It's better to live one day as a lion than 1,000 years as a lamb. So I ask you Chicago, live today with me and my teammates as lions." -- Duncan Keith, Blackhawks defenseman
Quick Hits
Each player was introduced one-by-one by Pat Foley, drawing the loudest cheers from the crowd were captain Jonathan Toews, Patrick Kane, Corey Crawford and Marian Hossa. The only person to draw boos from the crowd was Illinois Gov. Pat Quinn, who spoke briefly early on in the rally and declared today as 'Stanley Cup Champion Chicago Blackhawks Day' in the state ... The Blackhawks took out a full-page ad in the Boston Globe Friday thanking the Bruins, the city and their fans
Jim Cornelison opened the rally with another rousing rendition of the National Anthem. The fans, of course, cheered wildly throughout the song, staying with a Hawks tradition. Listen to the anthem here: