The historically progressive city budget promises record numbers of funding, but the current affordable housing locations and initiatives could indicate how much of the city’s promise is actually likely to come into fruition

Chicago's $16.7 billion city budget promises to be the “most progressive” in the city's history, with an impressive $157.4 million allocated to Affordable Housing — an especially essential resource in wake of the pandemic.

Current affordable housing initiatives demonstrate how Chicago examines and addresses housing needs, but just because the budget hosts larger funds, it does not necessarily mean new initiatives or vast improvements upon old models.

The locations of affordable housing units are essential to understanding how Chicago addresses homelessness rates and address poverty.

Data from the City of Chicago’s Data Portal suggests that current affordable housing is denser in areas south and west of downtown. Neighborhoods such as Grand Boulevard, Near West Side and Oakland host the largest number of units of affordable housing. The top four property types are Multifamily, Senior, Supportive Housing and Chicago’s Affordable Requirements Ordinance (ARO).

The four types of property suggest those are the preferred initiatives by the city to best support Chicago’s neediest. More analysis shows just how those top four are disbursed throughout the city.

While there is some overlap, the data show that ARO Housing is primarily directed at northern and northwestern ZIP codes in the city, while the other three popular property types display relatively even disbursement.

“That’s the desire,” said Julie Dworkin, the Policy Director of Chicago Coalition for the Homeless, “that the units will be on the north and northwest side where there is a lot of gentrification, and that was the intent of the ordinance.” 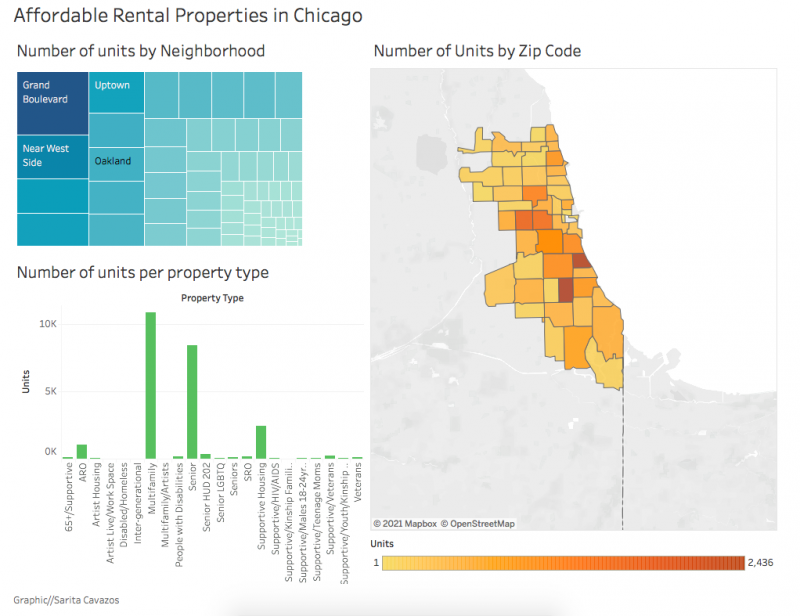 ARO is a City of Chicago Initiative that intends to prevent the drain of affordable housing in rapidly growing districts. It requires “that requires residential developments with 10 or more units that receive City Council approval for an entitlement, a city land purchase or financial assistance to provide a portion of the units as affordable housing,” according to the City of Chicago portal.

“What actually happened,” Dworkin said, “was the developers were paying money into a pot instead of making units on their properties. Those units could be anywhere, so advocates have really tried to clean up this ordinance.”

Developers have often elected to pay a fee rather than set aside 10 units, which prevented affordable housing status from being reached and allowed gentrification to continue in some areas.

“Affordable housing is a pretty big challenge for many cities,” said Dr. Deborah Anne Carroll, an associate professor with UIC’s Department of Public Administration. “Trying to restrict rents or provide assistance to affordable housing is not always welcomed by residents, but you need individuals at all levels of the income spectrum to be able to live in your city and to make it prosperous.”

But this map may soon change, as the need for affordable housing has increased exponentially in the wake of the pandemic. With the Illinois eviction moratorium ending on Oct. 3, many individuals and families potentially face eviction and even homelessness. This adds to the mounting pressure on the city by advocates to provide additional affordable housing and soon.

“[COVID] created an even larger divide between affordability and the realistically what individuals can rent, and I don’t think we have seen the full impact yet,” Carroll said.

Said Dworkin, “We have seen that the calls for homelessness prevention assistance have increased [two to three times]. The shelter system has been pretty much at full capacity throughout the pandemic.”

“There is a concern about the timeline, and how quickly they'll be able to implement these things,” Dworkin said. “I think people have a concern that because a lot of these things just take time, the money is going to be reallocated.”

It is not all doom and gloom however, with the budget now passed and through City Council, there is a heightened opportunity for new and improved initiatives where past ones have fallen short.

Dworkin added, “For homelessness they did put $65 million for permanent supportive housing, which is targeted for people with extremely lower to no income. Which is more money than the city has ever seen for supportive housing.”

If you or someone you know is facing homelessness or eviction, you can visit the City of Chicago Department of Housing’s resource page, which includes information on affordable housing and resources in the case of eviction.

If you doubt anything you just read in this story, know that our reporting and editing procedures are transparent. Read more about them on our Guiding Principles page. You can report an error by filling out this short form and we'll correct it.

If you would like to use or aggregate content on this site, please follow the guidelines in our Creative Commons 3.0 Unported License. This site is not affiliated with the Chicago Transit Authority or the CBS series The Red Line.