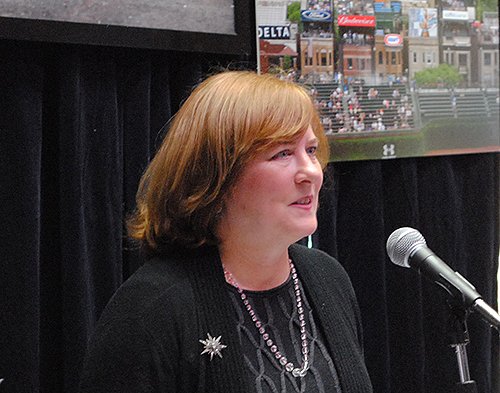 Just days after Mayor Rahm Emanuel told the Cubs and Wrigleyville business owners to "work it out" with the team's proposed $300 million renovations to Wrigley Field, the team rejected an olive branch extended Friday by its neighbors -- the Wrigleyville rooftop owners.

On Friday, the rooftop owners announced a plan that would allow the Cubs to sell advertising on digital videoboards that could be constructed on the building rooftops on Sheffield, Waveland and Kenmore avenues. But the Cubs quickly rejected the plan, saying the owners' projections $17.9 million in annual ad revenue and potential TV exposure weren't realistic.

The move by the rooftop owners came six days after Cubs Chairman Tom Ricketts unveiled the ballpark renovation plan at the team’s annual fan convention. The renovations -- which will be paid for solely by the Cubs without taxpayer help -- hinges on the city easing some of its restrictions on advertising, night games and events around Wrigley Field.

Among those restrictions are codes that prevent a large videoboard or advertising in the ballpark's left and right fields. That could potentially block the view from seating on the rooftops, which generate millions in revenue for local bar owners who own, manage and cater the rooftop parties.

Owners said Friday that they are willing to go to court to fight the changes.

Beth Murphy, owner of Murphy's Bleachers, unveiled the "win-win" advertising plan Friday morning at a press conference at Murphy’s Bleachers, just a few yards away from the right-field and center-field bleachers.

“There’s no reason for one business to put out the other if it doesn’t have to happen,” she said.

Poll: Should the Cubs have accepted the rooftop owners' ad plan?

The 16-locally-owned rooftop business owners said they hoped the plan would preserve Wrigleyville, help upgrade Wrigley Field, and stay in business. The plan will feature digital advertisement signs located on their rooftops, with 100 percent of revenue going to the Cubs and the city.

“We feel that we can join together with the Chicago Cubs and really create something that is unique in all of baseball,” Murphy said. “Something that doesn’t exist out there and that’s in keeping what’s already here, which is so special.”

The rooftop owners retained Steven Platt, director and research fellow from Platt Retail Institute, to determine the potential revenue generated from seven digital screens around Wrigley Field. The report concluded a potential of $20 million annually, though many owners said $17.9 million was a target number.

“I feel that they’re a little limited in what they can put up in the outfield, where this provides a bigger palate,” said Murphy. “I also feel it’s important not to clutter Wrigley Field. I think this may be a fan favorite just to keep the clutter out of Wrigley Field and more in keeping with the landmarking status.”

In 2004, Wrigley Field adopted the Landmark Ordinance in order to preserve its character and history. It also coincided with a 20-year settlement contract between the rooftops and the Cubs. Other parts of Wrigley -- such as the sign, scoreboard and Ivy on the outfield wall, have been protected as historical landmarks for many years.

Cubby Bear and rooftop owner George Loukas said he believes his businesses have impacted the Cubs and Wrigley Field.

“The entertainment at the Cubby Bear became renowned," Loukas said. "We were voted the music venue of the year in 1990. We brought in major acts—Johnny Cash, Charlie Daniels—we had them all and we brought thousands of people into the community weekly. We gave back to the community and we were part of the community. As we grew, our portions of contributions have increased.”

One aspect of the Cubs proposal included more advertising and signage in the ballpark. Co-owner Laura Ricketts told the Chicago Tribune that the restriction on signage puts the team at a disadvantage. Wrigley is the only Major League Ballpark to have such ad restrictions, and the Cubs say that hurts their bottom line.

This isn't the first time the Cubs have clashed with their neighbors over outfield signage. In 2011, the Cubs sold a left-field advertising sign to Toyota, which neighborhood associations and many businesses opposed. The uproar died down after the season started and the sign didn't appear to be too invasive of the neighborhood's charm.

Ald. Tom Tunney (44th Ward) opposes the signs in the outfield. According to Crain’s Chicago Business, Tunney said he opposed any element of the plan that includes signs that block views from the rooftops. The rooftop owners agreed, and they also oppose a proposal by the Cubs to shut down Sheffield Avenue for select games to create a fan fest area, as it could detract business from their bars and restaurants.

“When they (the Ricketts) bought this team, they bought it with all (of) the assets and liabilities," said Tunney, who did not respond to interview requests for this story. "They can't change the rules after the game."

But not everyone opposes the changes. The proposal was greeted warmly by players, media and many fans at the Cubs Convention last week at the Sheraton Chicago Hotel & Towers.

Cub fan and DePaul student Taryn Nickow attended the convention for her sixth consecutive year, and supports the renovations.

“Based on what I saw at the convention, I am definitely for this restoring plan," she said. "The Cubs organization is not doing this as a way to make more money—they are doing it as a way to enhance the ballpark and provide for their fans and team, with the best amenities possible." 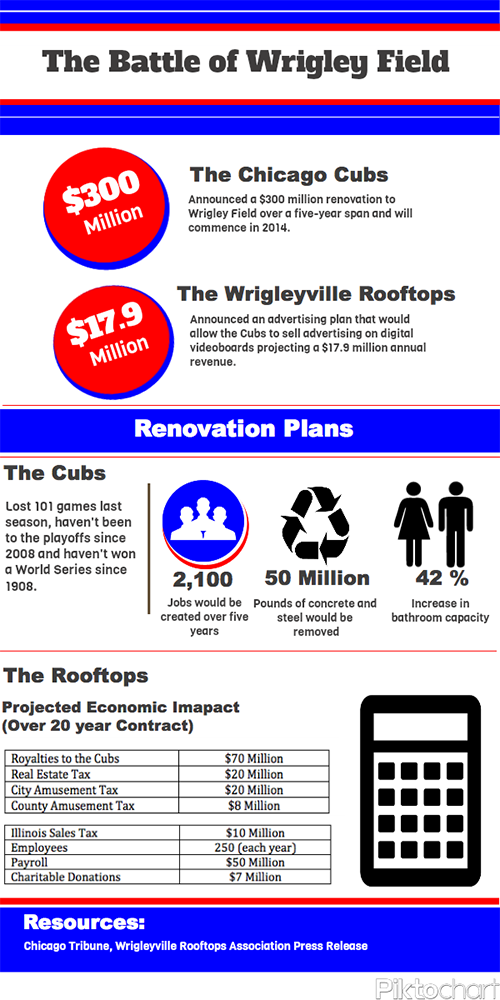