By Chris Burrows and Allison Horne

On a Sunday afternoon in April, fans arrived at an Addison Street stadium, parked for free, shuffled through the gates for $10 and chanted “GOOOOOOSE” in throngs.

They were treated to many of the Wrigley Field-type charms – a crackling public address system, bleacher seating and a decaying scoreboard – but were two miles west of that iconic stadium.

The team they came to see is professional, boasts a reigning MVP, a YouTube sensation turned record-holder that commutes from Florida for games and an owner who just over a year ago learned of the sport he’s now a part of.

At the end of the game, the fans came down to the field and met the players that they came to watch: Jonathan “Goose” Helton, Brodie Smith, Geoff Serednesky and others.

The Windy City Wildfire, a professional ultimate frisbee team and a 2013 expansion member of the American Ultimate Disc League, satisfied its growing fan base with a win over the Cincinnati Revolution, 23-16, on that day. But majority owner Steve Gordon is more excited about gaining the support of Chicago’s thriving ultimate community and of local sports fans as he sets out to pioneer Chicago’s first season of professional ultimate.

“When [the Chicago franchise] became available I purchased it within four days,” Gordon said with a chuckle. “It was quick.” 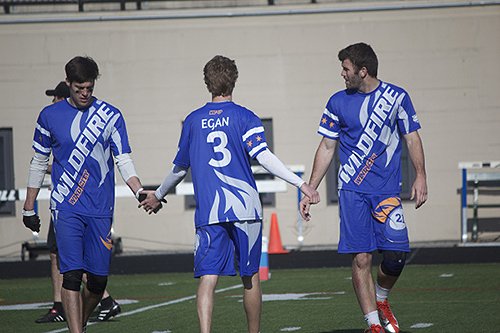 After a short stint spent selling advertising with the league’s Detroit franchise in February of last year, Gordon fell in love with the sport that he had only just met, so when the league announced that a Chicago franchise was available, he jumped at the chance.

“I went from being introduced to the game and doing a lot of due diligence to see what the game was about so that I knew what to sell to potential sponsors,” Gordon said. “As I did my due diligence, I got very excited about the game, in particular the spirit that the game values.”

Gordon found a home for the Wildfire at Lane Tech Stadium and knew he needed to land some big names to earn respect with fans. For that, he went straight to two of the biggest names in ultimate frisbee, both of whom had Chicago ties.

The league’s reigning MVP, Helton, played last season as a member of the Indianapolis Alley Cats. During that season he made the commute from his home in Chicago for games and practices in Indianapolis since moving to the Chicago area in 2010 from Jacksonville, Fla., so that his wife could earn a master’s degree at Northern Illinois University.

“The challenge of course last year was the travel – [Indianapolis] is almost four hours each way – so I spent a lot of time last year on the road,” Helton said. “I didn’t feel comfortable doing that again this year, so I was very happy to hear that there was going to be a Chicago team, and once I met Steve and got to know him, we clicked, and it was a privilege to play for this team.”

It was through Helton that Gordon developed a relationship with Smith, who last year also played with the Alley Cats but is better known for his trick-shot cult following on YouTube. The veteran player makes a living teaching frisbee clinics and selling frisbee products and played five years of ultimate at the University of Florida.

“Everybody knows who Brodie is,” Gordon said “Talking to Goose I got a lot more information as to how Brodie was, not only as a player on a team, but as a leader and as a teammate, and everything was very positive, so I met Brodie and felt very confident that he’s the kind of guy that I would want on my team.” 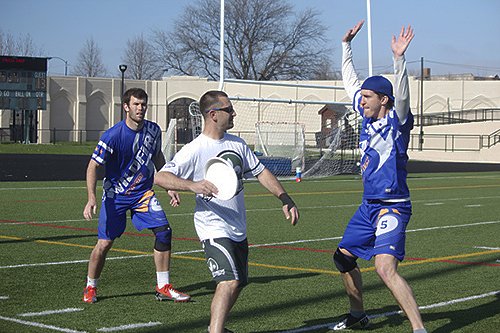 A Chicago native whose Dad still lives in the city, Smith embraced the opportunity
but couldn’t leave Florida behind.

“I actually live in Jacksonville right now, so I fly up every weekend and I do a lot of clinics and stuff during the week – trick shot videos and whatnot,” Smith said.

Gordon realized the value in a player like Smith for an upstart team.

Despite the challenges of finding time to practice around busy schedules, integrating players that have never played together before and adjusting to the rules of a new league, the Wildfire have lost just once in their first eight games of their inaugural season.

“One of the main challenges is that, unlike a regular club season, where we have a long period of time to practice with one another before we play a series, we had roughly six practices before our first game,” Helton said. “A lot of these guys are professionals in some other career, and it’s difficult to find time to play with one another during the week, and to be honest this is a pretty active city. Field space that’s lighted is very difficult to come by, especially without playing a premium.”

Smith, Helton and Rook are the only carryovers from the league’s inaugural 2012 season. The league plays under altered ultimate rules that introduce field referees, 12-minute quarters (instead of playing to a set score) and various penalties.

“The offense is different, how to play defense is different, so trying to overcome that mentality of this is how I’ve been playing and used to play is difficult,” Smith said. “Trying to get over that and get used to how you have to play in this league – that’s a difficult thing to wrap your mind around sometimes.” 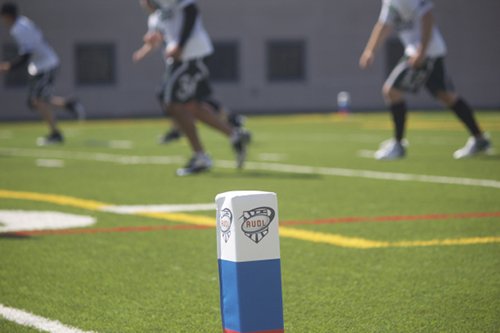 The Wildfire have so far only played three games at Lane Tech Stadium, but Gordon and his players have been satisfied by the support.

“The Ultimate community has been nothing but positive in embracing the Wildfire,” Gordon said. “Our attendance isn’t where we want it to be yet, but certainly isn’t a concern – we’ve had three home games so far – so it takes time over a couple of years to develop the kind of fan following that you want. For me – three games in – we’re very happy with the response so far.”

Helton, along with many other Wildfire players have been a part of Chicago’s club ultimate team, the Chicago Machine for many years, but getting paid to play in front of crowds has so far proved far more rewarding.

“I get a lot from the fans,” Helton said. “I enjoy playing in front of a crowd, listening to them get really excited. … It’s just an exciting atmosphere.”