A restaurant that produces 100 percent zero waste and preaches sustainability might seem like a figment of the imagination, but a local Lakeview sandwich shob is doing just that.

Justin Vrany, a veteran chef of the Ritz Carlton and Cantigny Club House, spent years cooking good food, but never considered the consequences. Ten years ago, he took a political science course at Kendall College, which focused on the food system in the United States.

“Before I took this class I was just cooking quality food that tasted great, but I wasn’t looking at where it was sourced or what we were doing with all the waste,” he said.

After attending classes at Kendall College, Vrany became interested in implementing the principles of sustainability and zero waste into his own life.

“I tried it in my home first and my wife and I experimented with being a zero waste family," he said. "We went one year with only a Jewel bag filled with natural waste. After that I was like, ‘we can do this in a restaurant’."

A one year sustainability stint gave birth to Sandwich Me In, Vrany’s 100 percent zero waste restaurant. Sandwich Me In has been operating since May 2, 2012, just recently celebrating it’s second year anniversary. In that time, the restaurant, located at 3037 N. Clark St., has collected eight gallons of garbage, which was recently picked up by a local artist and reused for an art project.

According to the USDA, four to 10 percent of food bought by restaurants is lost before even reaching a consumer, and the average person produces 4 1/2 pounds of trash per day, making the statistics of Sandwich Me In almost unheard of.

“As far as the practices we use to make the restaurant sustainable, we source everything locally, we use all renewable energy in the restaurant, all of the materials that are to-go wear are all compostable or biodegradable,” Vrany said.

The menu at Sandwich Me In. (Photo/Jessica White)

Once a month, Vrany drops off recycled goods that the restaurant has collected to a facility that recycles on the spot. Some recycled pieces are donated to a local art teacher that uses them in her art classes while teaching students how to reuse materials for art pieces. Sandwich Me In operates as both a restaurant and a compost facility, allowing residents in the neighborhood to join in on the sustainable mission by bringing in their compost from home. That compost is then utilized in three sustainable ways.

“We use two farmers who feed their animals and also compost and put that right back into their vegetables and crops," Vrany said. "Then our third composting company is an actual trash pickup company who brings the composting to a site on 122nd Street. They do wind-row composting and after 100 days it turns into dirt. They sell that to a lot of Illinois highway facilities and construction companies."

Vrany plans to take sustainability in his restaurant a step further by getting produce from a farm that is located just 20 miles away.

“This summer we’re going to have a farm in Englewood that’s going to be growing about 80 percent of our produce," he said. "That means we will be serving a product that is picked that day and served to guests. It can’t get much fresher than that."

Running a business with the mindset of being both sustainable and zero waste might seem like a difficult venture, but Vrany attributes his success to simply having a plan.

“As far as this being easy, once you get a system in, it is easy," Vrany said. "Like any business you run, you have to set up a system or you’ll fail. It took us about two months in the beginning to become no waste."

Many companies have been set up to help individuals and restaurant owners achieve the goal of sustainability, something Vrany utilizes as much as possible. One company has gone so far as to purchase the old oil that is used at Sandwich Me In, making Vrany’s idea both good for the environment and profitable.

Vrany said he believes sustainability can work for both individuals at home and restaurant owners across the U.S. Vrany chalks the lack of progress in the restaurant industry toward a sustainable future up to habit.

“People have been doing this for 50 years or so now and they’re just stuck in a routine," Vrany said. "They’re not used to change and they’re making money now, but in the end you can make more money and in the very end, you can help out the environment."

In the future, Vrany hopes to make his restaurant more sustainable and create a greater involvement with the community.

“I plan on making this restaurant as sustainable and community involved as possible with holding classes on sustainability, teaching people how to cook in their homes sustainably, and using local food," he said. "I just want to make the restaurant more community based."

Sustainability is not an option, but a requirement for Sandwich Me In. Vrany said there may not be room for the amount of waste an average restaurant or person produces in the future.

“For a lot of people and restaurant owners, sustainability is not their top priority but pretty soon, it’s going to have to be because we’re moving toward a nation that’s running out of space for its garbage,” Vrany said. 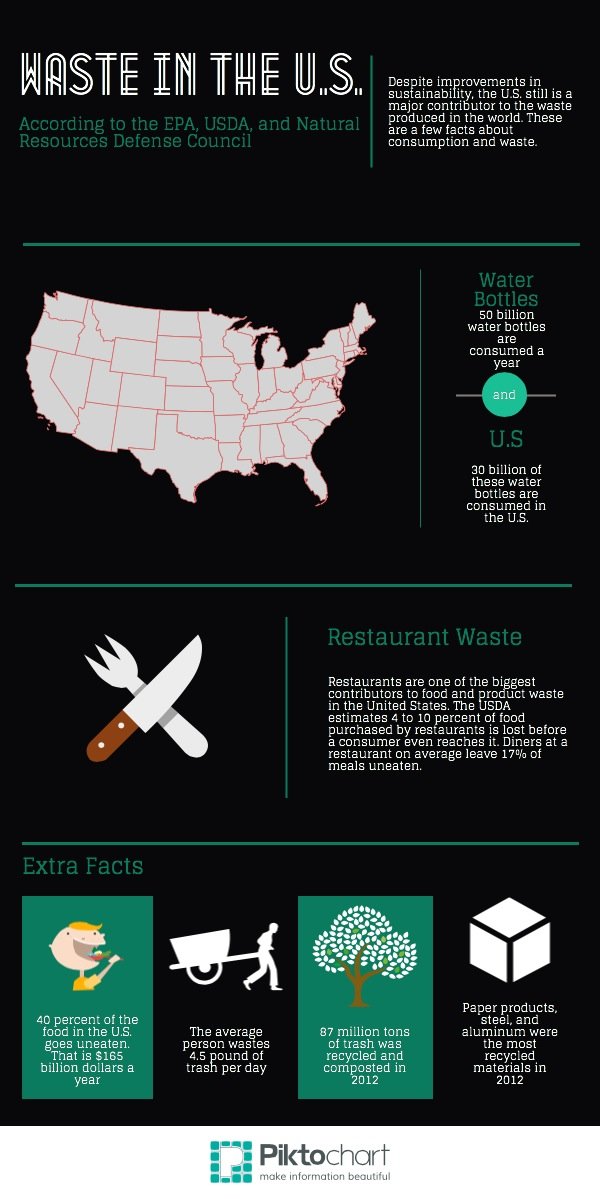