Last October, a fire burned down the Roadhouse 66 fire, a hookah bar and other businesses in the 3300 block of North Clark Street.

Now, many of the employees have found themselves out of work -- but several Wrigleyville businesses have stepped in to help with a fundraiser and job opportunities.

The fire, which began around 5 p.m. on Oct. 25, started inside the Samah Hookah Lounge at 3330 N. Clark St., and spread to the other units in the building. No injuries were reported.

With Roadhouse 66 being one of the affected businesses, most of the bar’s employees found themselves out of work. Matt Nolan, a former DJ at Roadhouse 66 explained that few of these people were financially prepared to be jobless.

“Some of these people live paycheck to paycheck,” Nolan said. “When I got word about the fire, my first thought was, if these people can’t find work soon, they probably won’t be able to pay their rent.”

According to former Roadhouse 66 server, Paulina Plewa, the staff and patrons of the bar had a strong sense of community before the fire.

“People often referred to Roadhouse 66 as their Cheers,” Plewa said. “If you were a regular, you were bound to be greeted by several friends as soon as you walked through the door.”

Unlike many of her co-workers, Plewa was already in the middle of changing jobs prior to the fire. While she wasn’t affected as severely, she feared for her fellow Roadhouse employees.

“I was fortunate enough to already be transitioning out of Roadhouse 66,” Plewa said. “Still, it was a great place to work. From day one they made me feel like part of the family. “Because we’ve grown so close, you can’t help but worry about what’s going to happen to each other.”

Zach Winter, the general manager at Redmond’s Ale House in Wrigleyville, said his employers first contacted him about the fire, while he was at work. He then went to the window where he could see a cloud of smoke in the distance.

“It didn’t seem real when I first saw it,” Winter said. “I started calling some co-workers and other people I knew from the area, and most didn’t believe me. You just don’t think something like that would happen around here.”

Winter added that if this were another part of the city, the other bars and restaurants in the area might see the fire as reducing competition. In Wrigleyville, the businesses rely on each other to strive.

“I’ve worked at bars before where, when we saw the bar across the street was busy, it made us angry,” Winter said. “But, Wrigleyville draws these big crowds every weekend because there is so much to do.” If there is less stuff going on, less people are going to want to spend their nights in this area. And that hurts everyone.”

In light of this misfortune, the Wrigleyville community came together to offer support to those affected by the fire. Neighboring bars and restaurants have been holding fundraisers, and even offering Roadhouse 66’s former employees jobs when available.

“There’s a strong sense of community in Wrigleyville,” Winter said. “For example, during baseball season when everyone’s really busy, if someone ran out of something, they could easily call one of the other bars to help them out. So, of course, something like this wasn’t going to be ignored.”

One fundraising event, held at Sluggers Sports Bar, had the bar’s entire backroom reserved, charging ten dollars for entry. According to Winter, participants were given wristbands the read “Long Live Road House 66.” Patrons could also purchase other types of Roadhouse 66 memorabilia, with proceeds going straight to Roadhouse 66 employees. Winter said he bought a baseball cap that read “We didn’t start the fire.”

In conjunction with the Sluggers fundraiser, a Giveforward page was created to raise additional funds for these employees, which raised an extra $2,800.

“Sluggers was a really successful event,” PIewa said. “It was great to see that so many people cared about the Roadhouse staff.”

The other businesses in the area are not only looking to offer financial support, but also aim to keep the spirit of Roadhouse 66 alive. Roadhouse Sundays, a regular event held at the bar that included drink deals, a DJ, and karaoke, have moved to the Irish Oak, a neighboring bar.

“Every Sunday, not only is most of the crew from Roadhouse 66 in attendance, but many of them are working it,” Plewa said. Whether it be behind the bar or DJing, this not only helps those former employees make money, but helps keep those connections strong throughout this difficult time.”

Nolan has been DJing during the Roadhouse Sunday events at the Irish Oak, and says he looks forward to them every week.

“Still seeing everyone on a regular basis helps people forget about what happened,” Nolan said. “Some people are still having a tough time since losing their job, but at least they know there’s still somewhere they can all meet up to get their mind off it.”

Nolan mentioned that there are plans to have the bar reopened, but no specifics have been discussed. He noted that a message on the Roadhouse 66 website reads: “We WILL be back up and running before you know it!”

“Normally a business would have a lot of trouble starting up again after a tragedy like this,” Plewa said. “But with things like the Roadhouse Sundays keeping this community together, I believe that when Roadhouse 66, does get back up and running, it will be stronger than ever.” 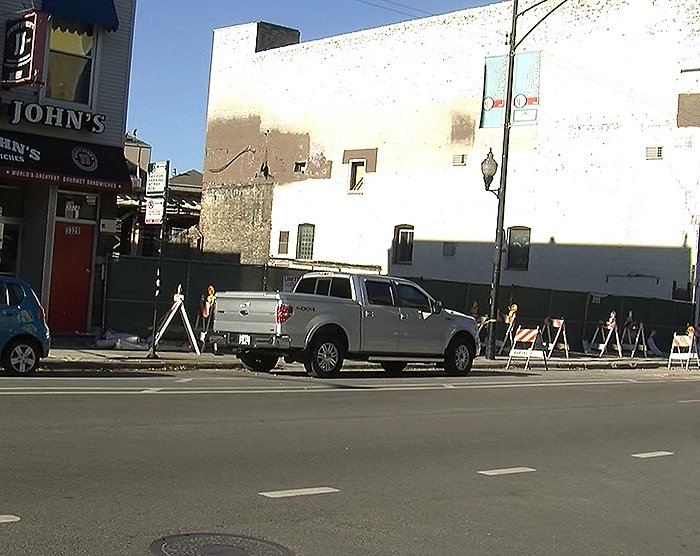 Construction crews tore down the remains of the buildings that burned on North Clark
Street. The area has been closed off since October. (Photo/John Zaccari)