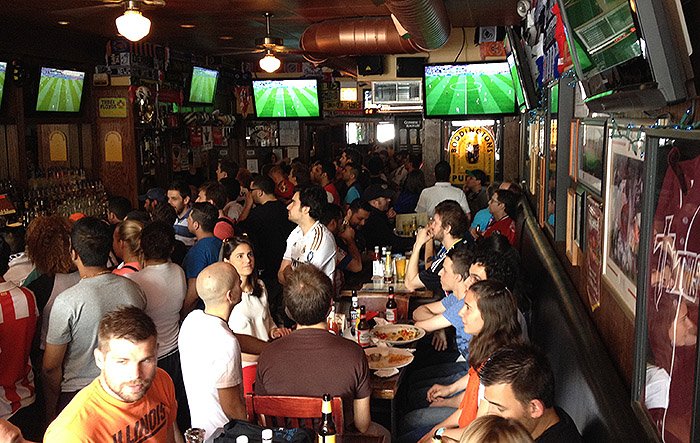 The Globe Pub is packed during big matches. (Photo/Cody Voga)

Enjoying the World Cup at home can be a good time, but how much better is it to go and watch with hundreds of screaming fans around the area?

Grab your buddies and significant other, go to these establishments and have a cold one with fellow soccer fans. The best places to watch the World Cup in the Chicago area:

The Globe Pub
1934 W. Irving Park Rd., Chicago, IL 60613 (Irving Park)
Voted the “Best Soccer Bar in the U.S.” by the U.S. Soccer Federation, The Globe Pub will again be one of the hotbeds for the 2014 World Cup. Located on the North Side, The Globe Pub is first and foremost a neighborhood destination, but with a difference.

The Globe televises all major soccer matches throughout the calendar year and organizes bus trips to Chicago Fire games.

It also has a comprehensive food menu that includes sandwiches, burgers, salads, pastas and fish. The draft and bottled beer selections feature ales, lagers and stouts from Europe and the U.S.

Timothy O’Toole’s Pub
622 N. Fairbanks Ct., Chicago, IL 60611 (Downtown)
A Chicago favorite for more than 21 years, Timothy O’Toole’s Pub is located just steps from Navy Pier. A sports fan’s haven, this subterranean bar offers over 70 HD televisions, sure to keeping all of the action within eyeshot.

With a neighborhood bar feel, Timothy O’Toole’s offers several options sure to please a wide range of tastes. If it is wings you desire, look no further than the award-winning wings. Looking for a monstrous meal? Take on the “Big Timmy” burger.

Timothy O’Toole’s has healthy options and a children’s menu, so everyone is invited. In addition, Timothy O’Toole’s serves weekend brunch complete with a build-your-own Mimosa and Bloody Mary bar beginning at 10 a.m. on Saturday and Sunday, perfect for early-morning games on the weekends. O’Toole’s has 48 beers on tap and a loaded drink menu featuring signature cocktails and martinis.

The Abbey Pub
3420 W. Grace St., Chicago, IL 60618 (Northwest Side)
Located at the corner of Grace Street and Elston Avenue, The Abbey Pub has been serving Chicago with good food and world-class events for over 30 years. Check out the Green Room Pub for eats and drinks. Boasting a new menu, the Green Room Pub is an ideal spot to watch all major sporting events, including the 2014 World Cup.

It is a great place to grab drinks, eat an Irish dish and relax while watching World Cup action form Brazil. You are never without a view of the matches, as televisions are strategically placed to give every customer the best experience possible.

McGee’s Tavern
950 W. Webster Ave., Chicago, IL 60614 (Lincoln Park)
Armed with over 45 40-inch televisions, McGee’s is the place to be come June 12. Every game will be televised and all booths have their own personal televisions, so you are never hidden from World Cup action.

McGee’s has been Lincoln Park’s neighborhood sports bar since opening in 1987. It's only a two-block walk from the Fullerton El stop to experience what the sports bar has to offer. McGee’s continues to grow and change in order to give you the best possible food, drinks and service. Friendly service is their goal. Great food is their trademark. Drinks bring on the fun. Visit McGee’s for the World Cup and see for yourself.

Bonus Watch
Don’t want to go to the pubs to watch the U.S. men’s team? You don’t have to …

Grant Park Watch Parties
Jackson Blvd. and Michigan Avenue
The U.S. Soccer Federation, the Chicago-based governing body of American soccer, will hold watch parties in Grant Park for the U.S. team's pool play matches against Ghana on June 16, against Portugal on June 22 and against Germany on June 26. Specific times and locations will be announced soon. Check USSoccer.com for details.

Read profiles of all 32 teams competing on a global StoryMap. Disagree with these picks? Then vote in our poll.