Video: Poochie Jackson and other workers give us a taste of The Wieners Circle. (Warning: Strong Language)

Brace Yourself: It's a Night at The Wieners Circle

WARNING: THE ARTICLE AND VIDEO BELOW CONTAIN STRONG LANGUAGE

“Happy Halloween bitches. OK, you take the food, you go get the money. Go get my money before I squeeze your balls till they bleed, motherfucker. You’ll be one sorry-assed dwarf when I’m finished with you.”

Yes, this is the type of conversation, deemed normal for every night at The Wieners Circle, a popular fast-food shack that boasts its charred hot dogs and burgers for those who are in for a delicious late night meal.

And Halloween night was no different. Despite the strong winds and temperatures in the 30s, Chicagoans walked into The Wieners Circle dressed up in bunny onesies, catwoman suits and as Ebola patients in a quarantine unit, to name a few. One woman walked in looking cold and tired and when asked what she was, she screamed, “I am trending bitches,” unbuttoning her jacket to show her T-shirt that had a hashtag symbol on it.

More people streamed in after midnight to get food and escape the cold. But before their orders, they pulled out their phones to record the personal attacks and insults on their friends’ costumes.

“Hey, hey. Hey, Backstreet Boys rejects, are you all going to fucking order or not?” No cash? What the fuck, there’s an ATM over there. Fucking idiots. Use it motherfuckers.”

The Wieners Circle, tucked away in Chicago’s Lincoln Park neighborhood has been in operation for 32 years and has since built its reputation on a rather interesting approach to customer service, where you are greeted with curses and insults, all taken in a good stride.

“You can’t go [just] anywhere and have people curse you out and call you names, [and] different adjectives that you don’t hear every day,” said Barry Nemerow, co-owner of the infamous hot dog joint.

During the day, The Wieners Circle has a different atmosphere – a quiet and family-friendly place. But walk in by 10 p.m. or later, all hell breaks loose.

“I’ve been working here for 16 years now and I’ve seen it all,” said Poochie Jackson, manager at The Wieners Circle.

“A lot of drunk people come in and they call me all kinds of names like fat bitch, and stuff and we just started going back and forth and it just continued on like that.” 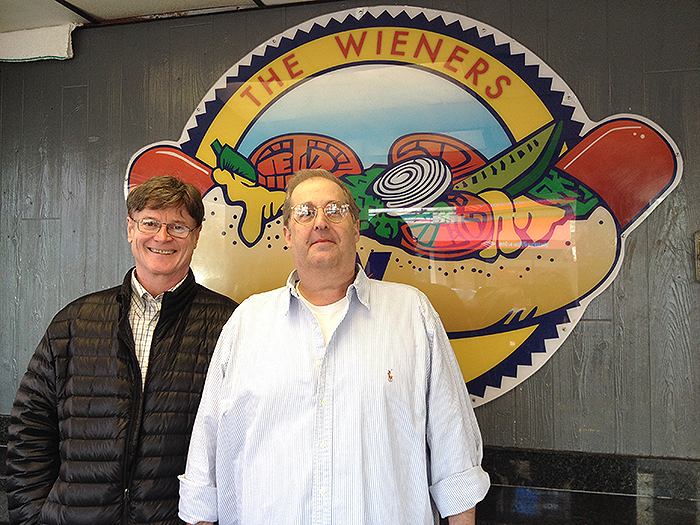 Jackson said being rude to the customers is not a rule for working there.

“That’s not a requirement,” Jackson said. “It was just because they were just talking mess with me, so I was talking mess back you know. Well, I thought that’s what you’re supposed to do, go back and forth with customers.”

The infamous name-calling tradition stemmed from co-owner Larry Gold’s irritation when we was working the night shift in 1992 and dealing with drunkards. He yelled, ‘Hey asshole’ to get a drunk customer’s attention as this person had failed to respond to repeated pleas to place an order. And this is something the current staff have no problems adopting when dealing with the rowdy crowds.

“The employees today just took it up to the ultimate level,” said Gold.

And so, for the past 32 years, The Wieners Circle has become a place for Chicagoans to get a late night snack, and perhaps a little bit of tough love.

“Today, people come in because of the abuse – besides the food at late night – they want to be insulted,” said Gold.

“Evidently, they’re punishing themselves for getting stoned and drunk and all that stuff, so that’s how they fight back.”

So this is the drama that unfolds during the night shift. But during the day, it’s a different story. The Wieners Circle has a completely different vibe to it – a casual place to grab a bite of the ‘char’ specialized fast food and there is absolutely no exchange of insults between employees and customers.

Over the years, the costs of running a restaurant business have changed but Nemerow and Gold’s long time experience has taught them to face these challenges.

“Things in this neighborhood are expensive, rents are high, food costs are really high now, so we work on a very small profit margin,” Nemerow said.

“We try to keep our prices down and work on volume [...] but our business is popular so we keep the menu small and do inventory on a weekly basis, we don’t have any freezers, everything comes in fresh, and we keep a tab on it.”

According to Nemerow, in the 32 years of the business, “nobody has ever walked through the door and ordered something we don’t have.

“We have always had hamburgers, and anything that’s in there and anybody who wanted that is able to have exactly what they wanted,” Nemerow said. “We never once said, ‘Oh I’m sorry we ran out of it.’ So I pat myself on the back for it. I do most of the ordering.”

And while many employees enjoy the release of insulting their customers, cashier Yolanda Smiley said there are merits to working the day time shift.

“I prefer to do the day shift, right where I am now because it gets to a point where you just want them [customers] to come in and order and give them food and say have a great day,” Smiley said.

The Wieners Circle’s reputation for high quality food and customer “disservice” has not halted in Chicago. Within the past year, several locations have been opened in both the Santa Fe Hotel and Red Rock Hotel in Las Vegas.

One key difference? These new locations do not boast the same customer abuses found in the home of The Wieners Circle, the Windy City.

Additionally, Jackson will be heading to Los Angeles to train new staff at a location set to open in Southern California sometime this year. Training will include “how to do ordering, how to set up things and how to rotate things.”

“But my boss’s main focus is, you make sure my money’s straight and then it’s everything else. It depends on the team,” said Jackson.

“I just want people to know that just be yourself and let your own type of comedian come out.  I don’t really know what they expect when I go to LA, I’m going to go and show them just be your own person and don’t try to be me or say what I say because I’ll say whatever that comes out of my mouth.”

Although the owners of The Wieners Circle are proud of their expanding business, Gold said nothing will compare to the original.

“You can’t duplicate what we have here, it’s just a chemistry of what late night is in Chicago.”