U.S. military veterans must deal with delays in federal services because of an overwhelming number of soldiers returning from the Iraq and Afghanistan Wars, but grassroots organizations in Illinois and other states are stepping in to fill the gaps.

Less than two years old, the nonprofit Warrior to Warrior Volunteer Veteran Program is one of those grassroots organizations that help Illinois veterans with the problems they face when returning to civilian life.

"When a veteran gets out, they are entitled to benefits due to their disability," said Joe Franzese, Warrior to Warrior program coordinator and Iraq War veteran. "With the wars in Iraq and Afghanistan, [the government] didn't anticipate them lasting 12 years. They weren't prepared for the amount of veterans coming out and needing the VA services."

Franzese said that many veterans have to wait to get evaluated by the Department of Veterans Affairs (VA) because their disabilities aren't as apparent as physical injuries.

"A lot of it is mental, from a traumatic brain injury or an explosion or just having to do something that will affect them for the rest of lives,” he told a DePaul University journalism class. “A lot of that is hard to evaluate and it takes time.”

U.S. Department of Defense statistics say that since Sept. 11, 2001, more than 2.5 million U.S. service members have been deployed to Iraq and Afghanistan. When veterans return, it can take up to 500 days for the VA to evaluate their case and assign benefits, Franzese said.

"It's just a huge bureaucratic mess unfortunately," he said. 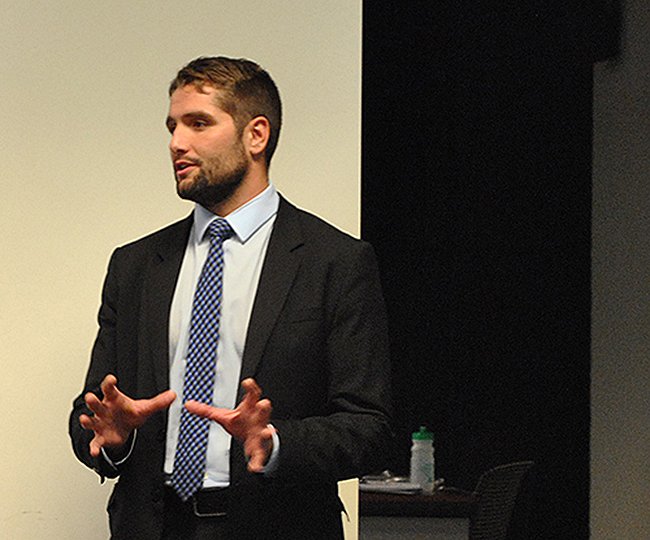 Veterans are challenged to pursue an education, find a job, and integrate back into society, Franzese said. They can turn to peer mentor organizations for help.

“The Warrior to Warrior Program does a lot of outreach to other veterans,” he said. "We give those individuals support and introduce them to all the resources that are outside of the VA that they don't have to wait for.”

The Marine Corps was the first U.S. military branch to help its veterans with mandatory transition assistance, Franzese said. As a Marine who has gone through the program, Franzese said the comprehensive plan includes guest speakers and help applying for benefits and resume building. Other military branches have recently started modeling their own programs.

“For the first two months, I had to deal with friends who said that I had changed,” said Juan Perez, an Afghanistan War veteran and the veteran program assistant for Warrior to Warrior. “They didn’t really feel like they were friends anymore. So I started to seek out other Marines and service members who were transitioning.”

Warrior to Warrior helps build those relationships. The peer mentor program connects veterans with other veterans or soldierswho are currently serving.

Franzese said only a small percentage of older veterans from World War II, including his grandfather, received federal benefits from the VA.

“Vets would turn to the VFW and American Legion to be cohesive again, to be with other vets,” said Franzese, who stressed the need for camaraderie. “They can get together and exchange stories.”

Starting in 2012, the Illinois Warrior to Warrior Program has serviced about 80 specific veterans and reached out to 190 families. Managed by the Health and Disability Advocates organization, Warrior to Warrior was originally modeled after the Buddy-to-Buddy Volunteer Veteran Program at the University of Michigan.

“They’ve got a lot of work to do and they’ve come a long way,” Franzese said. “But they still have to keep putting out a lot of work.”