For Poll Workers, It Was an Election Day Like No Other

By Jonah Nink and Fernando Mendez | 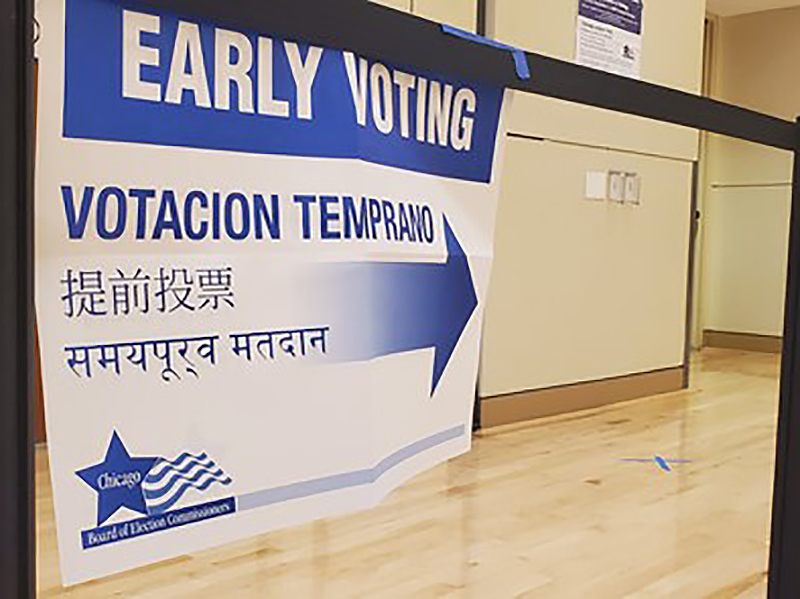 The election saw record early and mail-in voting due to the pandemic,
making thelines shorter on Election Day. (Photo/Jonah Nink)

The COVID-19 pandemic, which by late October of this year had surpassed 300,000 confirmed cases in Cook County alone, made Election Day  unlike any other for those working at the polls.

Despite a surge in absentee and mail-in ballots, many Illinois voters still went to the polls to cast their ballots in person for early and election day voting. Both veteran and first-time Chicagoland-area poll workers saw heightened safety and distancing measures implemented to help mitigate risk and maintain a safe election.

According to the Chicago Board of Election Commissioners, Chicago alone saw a 72.37% total voter turnout. Overall interest in early voting rose around the country in 2020 compared to 2016, according to an analysis of Google search data in Google Trends.

With a sudden increase in voter turnout, safety precautions were implemented to keep voters and poll workers safe. David Adamiec, an election judge, equipment manager, and polling technician in Berwyn for seven years, noted how the turnout is different from previous elections.

“For a regular presidential election it would have been packed,” said Adamiec. “Because of the COVID [there] were a lot of mail in ballots.”

In addition to regular polling equipment, most polling places were outfitted with sanitation equipment such as hand sanitizers and disinfectant wipes. Poll workers were required to wear personal protective equipment such as face shields, spare masks while working to protect themselves as well as voters. At the same time, special attention was given to keep voters 6 feet apart.

“We had more than enough PPEs. We had a special online training session for COVID protocol,” said Carolyn Rhodes, an election judge that has served in Cook County for the past six years.

Most election judges are over the age of 61, an age group that is especially at risk for COVID-19. This year saw a record number of younger Chicagoans become poll workers, with WBEZ reporting that over 2,000 16-44 year-olds applied to be election judges.

“We have gotten for the past two or three years, more students and that for me has been refreshing,” said Rhodes, an election judge who has served in Cook County for the past six years. “[Students] I feel teach me, you know, they give me a shortcut when I’m having a hard time with something.”

“In every election before this one that I've been a judge for, I was the only person under the age of thirty present in the precinct, but this year I was joined by two high schoolers and another college student,” said Zarifah Shahid, a sophomore at the University of Illinois at Chicago who has worked as an election judge in Chicago since 2019. “I've always thought more younger people should help work the polls. It brings a different energy, and young people are more likely to try and be nice to an irritable voter than shout back at them.”

Chicago area voters that chose to forgo early voting or absentee ballots in favor of voting in person on election despite health risks did so normally for a myriad of reasons, some of which included fears over comments made by President Trump prior to the election denouncing early voting.

“I’ll be blunt and say that my political affiliations; I don’t like Donald Trump and I knew that he was going to, as he has already done, try and twist [mail-in voting] to say that it’s illegal,” said Paul Mizner, and Oak Park resident who voted in person on November 3rd. “So essentially I voted in person because I wanted the day-of numbers to be good.”

Despite preliminary fears, no major issues were reported in Chicago on election day, with most in person voters enjoying a safe and efficient voting process.

“Everybody had masks on, obviously. They disinfected everything that they gave me,” Mizner said.

Jesse Orozco, a Berwyn poll worker, noted that there were no issues with social distancing guidelines at his precinct.

“The voters seemed to be well aware of the six foot distance,” said Orozco.

After four days of vote counting in key swing states such as Pennsylvania, the Associated Press announced on November 7th that Democratic challenger and former vice president Joe Biden had won the election over sitting president Donald Trump. In Illinois, a historically democratic state, Biden beat President Trump by over 1,000,000 votes.

This election also encouraged many people to work in the polling place. According to an email sent to poll workers from the office of Cook County Clerk Karen A. Yarbrough, Cook County saw 15,000 people apply to be poll workers, with 8,500 poll worker positions filled.

“It was something that I always wanted to do, but I had a very busy work schedule. I’m retired now so I was able to easily fit it in,” said Orozco.

“Even though [the new election judges] did online training, they need to mail the book, Rhodes said. “Because the book is essential”.

Despite being in danger of COVID-19 veteran election judges continue to serve their community for the experience.

“You get to talk with the people. And you're part of a process, you know, sometimes it's stressful, but a lot of times, it's okay,” Adamiec said. “Then you get good judges and you work together. It's really amazing how it's like a hand in glove, and I enjoy that”.

Even with a pandemic keeping everyone apart and having their doubts, judges like Rhodes continue to work for the community.

“Seeing the same people fulfilling their right and teaching you guys [new election judges] this. It’s not only for the check, to me, it’s more than that,” Rhodes concludes. “The civic duty and knowing that I made a difference, somehow and some way. Not just as an election judge, but as a person of disabilities as well”.