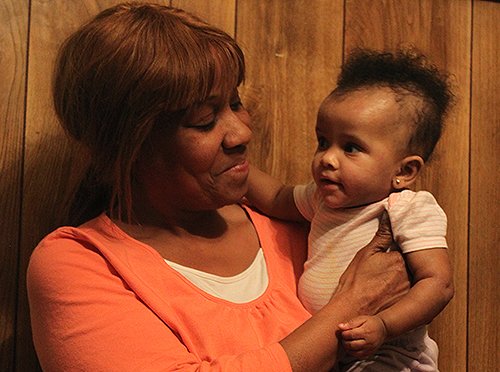 A Son's Death, a Mother's Grief

Donna Hall never thought in a million years that she would be writing her child’s obituary. But she was.

After a belated birthday celebration at Rivers Casino in Des Plaines, Marshall Fields-Hall said goodbye to his mother and grandfather one last time before heading out on a Friday night in mid-January.

“He put his jacket on and said 'I’ll be back,' and my father told him, ‘Be careful out there in them streets,’ ” Donna Hall said.

Two hours later, Donna said she heard someone banging on her front door. She knew something was wrong.

“That’s not normal because [the neighbors] know I have a doorbell,” she said.

Donna’s neighbor came to tell her that her son had been in an accident at Popeye’s restaurant, just blocks away from their Austin home. She frantically waved down a neighbor to watch her granddaughter—Marshall’s 6-month-old daughter.

She ran the four blocks to the Popeye’s Chicken and Biscuits on the 5500 block of W. North Avenue without shoes or a coat.

“I saw so many police cars and yellow tape,” Hall said. “I was just asking, ‘What happened? Where’s my son?’”

Audio: Listen to Donna Hall tell the story in her own words.

Marshall had already been taken to Stroger Hospital. She waited for the news on her son’s condition. She kept telling herself her son would be OK.

On Jan. 18, her son Marshall, was shot and killed with a handgun in that restaurant. It was just a couple weeks after his 21st birthday.

Hall said authorities told her that Marshall was in the restaurant talking to friends. The gunman came to the window and shot four times. The coroner told her one shot went straight through his back to his heart.

He was the 28th person killed in Chicago from gun violence in 2013.  January’s 43 homicides were the highest for that month in a decade.

Marshall was the youngest of her two children. He attended Gordon Tech High School, where he was a running back for the football team until his sophomore year. At 18, he was convicted of burglary and spent nine months in boot camp.

After that, Marshall decided the streets weren't for him, his mother said. He got an apartment and launched a janitorial business with his cousin cleaning day cares in the south suburbs.

Police say Marshall is a documented gang member. But Donna said she never knew her son to be in a gang, and too often people are labeled as a gang members just because of a prior criminal conviction.

She described Marshall as being a loving, charismatic person who liked to make people laugh. He was very close with his family and was crazy about his daughter. She said people who come in contact with him couldn't help but to like him.

"If you met him you would fall in love with him because he was a charmer," she said. "Everyone would tell you that."

She now has a difficult time walking past the Popeye’s that she and her family once frequented.

“I don’t want to go in there because when I do... I’m looking right there,” she said. “My child died right there.”

Marshall was shot in a well-lit restaurant on a fairly busy West Side street, but the shooter still hasn’t been caught.

Donna said she has become increasingly frustrated with the detectives on the case because she thinks they aren’t doing enough. But she said she’s not going to give up -- even if that means solving the case herself.

“I get on my knees and I just keep praying,” she said. “I would never ask why…it’s [God's] will and he will give me strength to deal with this.

“As long as I’ve got breath in my body I’m not going to stop fighting for my child. I’m going to find out who did it.”

She wants the opportunity to face her son’s killer. But she doesn’t entirely blame the shooter for his actions. She said whoever did it was taught by the streets and, in her opinion, that’s exactly the problem.

“[They] need role models,” she said of youth. “We as a community have to come together … because it’s going to get worse.”

She said the neighborhood needs more community organizations and mentors that could help young people learn how to resolve conflict.

Donna said she was angry at first, but would never question God’s plan. 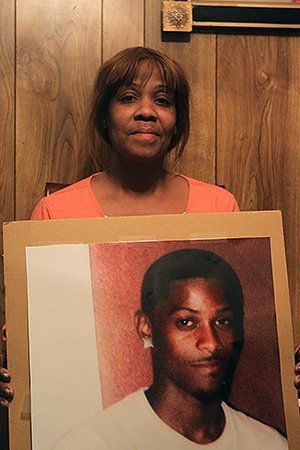 The constant reminders of her son are what keep her going. She said when she looks at her granddaughter, Serenity, she sees him.

“[There's] not a day that goes past that I don’t talk to him,” she said. “And when his daughter reaches for me, I say that’s him reaching for me.”

Donna said that she has a difficult time sleeping and now takes medicine for depression. At best, she said she gets about two to three hours of sleep per day. A night doesn’t go by that she doesn’t stop to look at her son’s picture and talk to him, she said.

“I go to sleep hoping to dream about him,” she said. “He’s not coming to me yet, but he’s going to come to me.”

Donna Hall holds a picture of her son, Marshall. She held this same picture during a rally and march for victims of gun violence. (Photo/Josclynn Brandon)