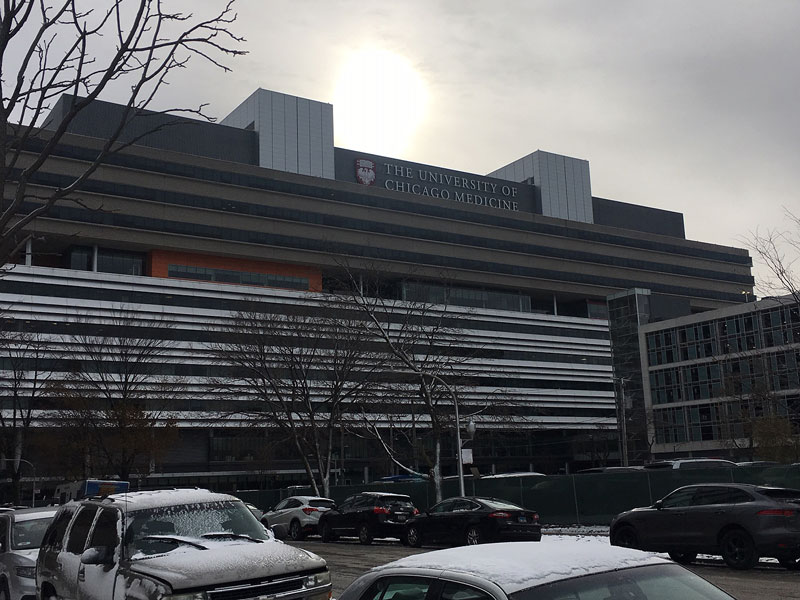 U of C Trauma Center Filling South Side 'Trauma Desert'

By Simone Rich and Brandon Graver

In August 2010, 18-year-old Damian Turner was shot near the corner of 61st and Cottage Grove—just four blocks from UChicago Medicine. However, because of the protocols in place for trauma care, paramedics transported Turner nine miles away, to Northwestern Memorial Hospital, where he later died.

Turner was a co-founder of the youth program within Southside Together Organizing for Power, or STOP. Following his death, the community organization began to fight for a trauma center to be built within UChicago Medicine to serve the residents of the South Side.

“That youth program founded the trauma center campaign, which became a coalition,” said Dominic Surya, a developer at South Side Together Organizing for Power (STOP). Surya joined the community advocacy organization in 2014, four years after Turner's death.

Unfortunately, the Turner's death is not an isolated occurrence.

According to crime statistics from the Area South sector of the City of Chicago Police Department, there have been 682 shooting incidents as of mid-November 2019. And without a trauma center at UChicago Medicine, many of the South Side victims would be forced to be taken to the next closest trauma center—a minimum of nine miles away.

Surya recalled an incident that highlights the consequences of neighborhoods that lack trauma centers.

“This was before my time [at STOP], but there was a lady whose son was bitten by a dog or something, and she was not taken at [the University of Chicago] Medical Center,” he said. “She ended up getting her kid emergency treatment at another medical center, which she had to take him to on the public bus.”

According to UChicago Medicine, after the closure of Michael Reese Hospital in 1991, the South Side was without a trauma center for several years. Patients in critical condition, needing specialty trauma care, were taken several miles in bad traffic.

That’s the danger of living in a trauma desert.

STOP fought for a trauma center to be added to the South Side for the next five years. In 2015, a partnership between Mt. Sinai Hospital and UChicago was announced, in which both hospitals would work together to open a joint trauma center at Holy Cross Hospital on the Southwest Side.

However, later that year, UChicago Medicine announced it would be launching a trauma center at its Hyde Park location, and close enough to serve a large percentage of South Side residents.

UChicago Medicine opened the doors of its trauma center on May 1, 2018. In its first year, the new Level 1 adult trauma center treated almost 3,000 patients.

“We’ve had the unique opportunity to start from scratch and design the trauma center to be what we wanted and what we thought would most serve our community,” said Dr. Jennifer Cone, an acclaimed trauma surgeon who joined the trauma team before its launch in 2018.

Trauma cases can be extraordinarily stressful—for hospital workers, patients and their families. Cone added that it involves more than just performing surgery.

“My job is not only to stop bleeding or repair organs, it’s also to hold my patients’ hands, listen to their stories, and connect them with the support they may need,” Cone said. “I remember the hugs, the smiles, and the tears I share with my patients and their families.”

One of the programs that UChicago Medicine introduced with its new trauma center was the Violence Recovery Program. In its first year, the program assisted 792 patients and 334 families that were affected by gunshot wounds, stabbings and assaults.

“So, I think the hope is to have a broader community presence than just the extreme [situation] when someone gets shot,” Surya said of the medical center’s program.

Cone described the Violence Recovery Program as an integral part of trauma care at UChicago because of the way it promotes wellness and reduces the risk of future injuries. Each intervention is individually tailored to the patient and situation with help from the community, social workers, case managers, chaplains, mental health care and vocational resources.

The South Side’s new addition is also impacting more than just its patients.

“There has been a change by EMS in boundaries of the areas served by Sinai and other hospitals since UChicago opened its trauma center in 2018,” said Dan Regan, vice president of communications and marketing at Mt. Sinai Hospital. “Our service area decreased slightly.”

Regan added that although UChicago Medicine and Mt. Sinai do not share any resources or staff following UChicago Medicine’s decision to move forward with the trauma center, the two medical centers still work together in other ways.

Mt. Sinai and UChicago Medicine both work as part of the Region XI in the EMS system. This allows both hospitals to coordinate the best possible emergency care for patients.

So, what does the future hold?

For STOP, it involves continuing to fight for the South Side. After five years of advocating for the trauma center, the youth branch of STOP has been re-founded and is largely based at Hyde Park Academy. However, its team continues to work with the other branches of the organization. The next big focus: working with Mayor Lightfoot to reopen the mental health that were closed many years ago.

For UChicago Medicine, the plan is to continue to enhance the lives of residents in the area with quality care that is unavailable in the area otherwise.

“We are often helping people on the worst day of their lives,” Cone said. “Saving someone’s life is incredible, but I absolutely love seeing my patients in a follow-up clinic and knowing that they are safe and doing well.”