The Fall and Recovery of Chicago Tourism During COVID-19

By Linh Nguyen and Javier Pena |

Jesse Holderfield, of Raleigh, North Carolina, visited Chicago during the second week of April as COVID-19 was increasing. While many main attractions and venues were closed, it did not stop the enthusiastic young traveler from touring the city due to his pledge to see the city and friends.

“I come from the countryside of Raleigh, so going to Chicago for me was big,” Holderfield said. “it was like I've been to New York before, but I, you know, I've never really, that's the only time experience in that ‘city’ city type of vibe.”

“Like we have a downtown over there, but it's not nearly what Chicago is. So I just, I just wanted to go experience the city.”

Holderfield is among many tourists who have visited Chicago amid a global pandemic that has devastated the tourism economy in Chicago and abroad.

According to the Illinois Office of Tourism Department of Commerce and Economic Opportunity, the state received 120 million tourists in 2019. Illinois experienced tourism growth for the ninth year in a row. The U.S. Travel Association estimates that tourists spent $43.1 billion in Illinois last year. That was a 3% increase over the prior year.

According to the Choose Chicago database, the pandemic has also greatly affected visitation numbers for 2020; Overseas tourism toward the city within the top 20 markets showed a -80.3% change in visitiations which pales in comparison to 2019’s previous change of -3.1% toward 2018’s visitation numbers.

Chicago’s tourism may have been crippled due to the high population density, but steady recovery can be quite different in comparison to Illinois’s urban or natural tourism.

Dr. Suiwen Zou, an assistant professor at University of Illinois Champaign in the recreation,sport and tourism department, said,“The pandemic impacts on tourism are disproportionate.”

“In fact, tourism is picking up now and is thriving in certain areas that are perceived to be sparsely populated and have great outdoor and nature resources,” she said. “However, UNWTO's recent survey suggested that most travel experts don't think the tourism industry will recover to pre-pandemic levels before 2023.”

COVID-19 has devastated the tourism industry, shuttered schools, businesses and required people to stay at home for long periods. Main venues of Chicago may not be as crowded but that has not stopped some people from visiting.

Many visitors haven't looked past the main travel restrictions put in place and have learned to be cautious, but with vaccinations more readily available, Holderfield, 25 was inclined to travel around Chicago, even with the threat of COVID-19.

“I was with my friends, I rode on the red line, the subway experience, that was pretty cool. That definitely, you kind of felt that, you know, the COVID restrictions over there and everything, but everything feels like it's in the right direction.” He said.

Many tourists like Holderfield say the situation is getting better for the city, as museums and venues are reopening. Central areas of tourism like the Field Museum recently opened in January and Zoos within the Chicago area like the Lincoln Park Zoo have reopened to the public in March of this year.

Still, the COVID-19 virus is still present, and while the numbers of those recovering have gone up, the city and state’s positivity rate started increasing again in early April.

The Fall of Chicago Tourism

Nearly 100 trade-show cancellations at McCormick Place over the past year cost Chicago more than $1.4 billion in hotel, restaurant and entertainment expenses. According to Choose Chicago statistics, Chicago’s direct tourism spending accounted for more than $16.5 billion and raised more than $1.1 billion in tax revenue for the city and state.

Not only that, according to estimates from the Near South Side convention venue, it was reported that the nearly 100 cancellations of McCormick Place trade shows cost Chicago more than $1.4 billion in hotel, restaurant, and entertainment expenses. In 2019, according to the statistics from Choose Chicago, the direct tourism spending in Chicago accounted for more than $16.5 billion, raising more than $1.1 billion in tax revenue for the city and state.

During summer 2020, Chicago's tourism overall background was significantly different from previous years. There were no major events like Lollapalooza, Chicago Pride Parade or Taste of Chicago. The Skydeck Chicago - an observation deck on top of Willis Tower, was also closed. So were the museums. Baseball has been canceled since March, 2020. The fireworks show at Navy Pier also canceled, this event typically draws more than 100,000 people, according to Navy Pier spokesperson Payal Patel.

According to data tracking firm STR, the city's occupancy rates remain abysmal, posing a significant challenge for hotels. The occupancy rate in Chicago was 31.1% for the week ending June 6, 2020 down from 83.5% over the same time frame of the previous year. And the hotel occupancy also decreased strongly. In 2019, it  decreased -1.7% from the previous year 2018, and then when it came to 2020, it decreased strongly to -64.8%.

For the hotels, normally the summer road-trippers would be attracted particularly and that's an opportunity for hotels business to increase their revenue. The 8 states closest to Illinois typically account for 70% of leisure travel to the city, according to Whitaker, CEO and President of Choose Chicago. “We have been the playground for neighboring states,” he said

Due to stay-at-home order, to survive in the short term and post-COVID, the hotel and airline industries said they could use help from the federal government. United Airlines said a federal mask mandate would help the traveling industry get back on its feet, while hotels said they need financial help to survive during the next few months.

"We need to make our property tax payments, loan payments so we don't get foreclosed on," Jacobsen said. "One in four hotels nationwide is default on loans right now."

According to the Loop Alliance, pedestrian activity on State Street in the Loop has increased by 35.3% in June, 2019 compared with the previous months. However, it was still down by 79% compared with the same time period in 2019.

COVID-19 has created a large disruption in the tourism industry, but this is not the first time the United States or cities like Chicago have undergone such a disturbance;

Doctor Zou recounts, “Recent massive disruptions similar to COVID-19 can be SARS in 2003 and the 9/11 terrorist attack.”

“However, the economic impact of COVID-19 on the tourism industry is likely to be more significant than 9/11 tragedy and the 2003 SARS outbreak, mostly because the magnitude and the scale of COVID-19 are unprecedented.” she continued.

During the second year of the pandemic, travelers and tourists are not as abundant as previous years and places that depend upon these tourists like the Lincoln Park Zoo struggled through 2020, but feel hopeful towards a recovery in 2021 going forward.

“Throughout the pandemic, the zoo has temporarily closed twice,” she said. “We’re excited to once again be open and to connect Chicagoans with wildlife. Another challenge is requiring free reservations, as many Chicagoans are used to stopping by Lincoln Park Zoo at any time.”

The coronavirus may have shut the zoo down, but it did not stop it from bringing animals and entertainment to those who can't go in person to visit all the offerings of the park.

“For the foreseeable future, free reservations will be required to visit the zoo,” Cynova said.

“Lincoln Park Zoo has increased its virtual events offerings. From Virtual Animal Experiences to Virtual Run for the Zoo, zoo lovers from all over Chicago and beyond have the ability to connect with wildlife from the comfort of home.”

The Lincoln Park Zoo has been operating for more than a century within the Greater Chicago Area, but the Zoo is determined to follow city and state guidelines until it may open its doors fully to tourists and Chicago residents alike.

The pandemic has been a learning experience for many businesses and venues alike, but one thing is certain, the Lincoln Park Zoo shows that those businesses are not alone in the slow recovery from an impactful year.

“One takeaway from the pandemic is that communities are stronger together.” Cynova said 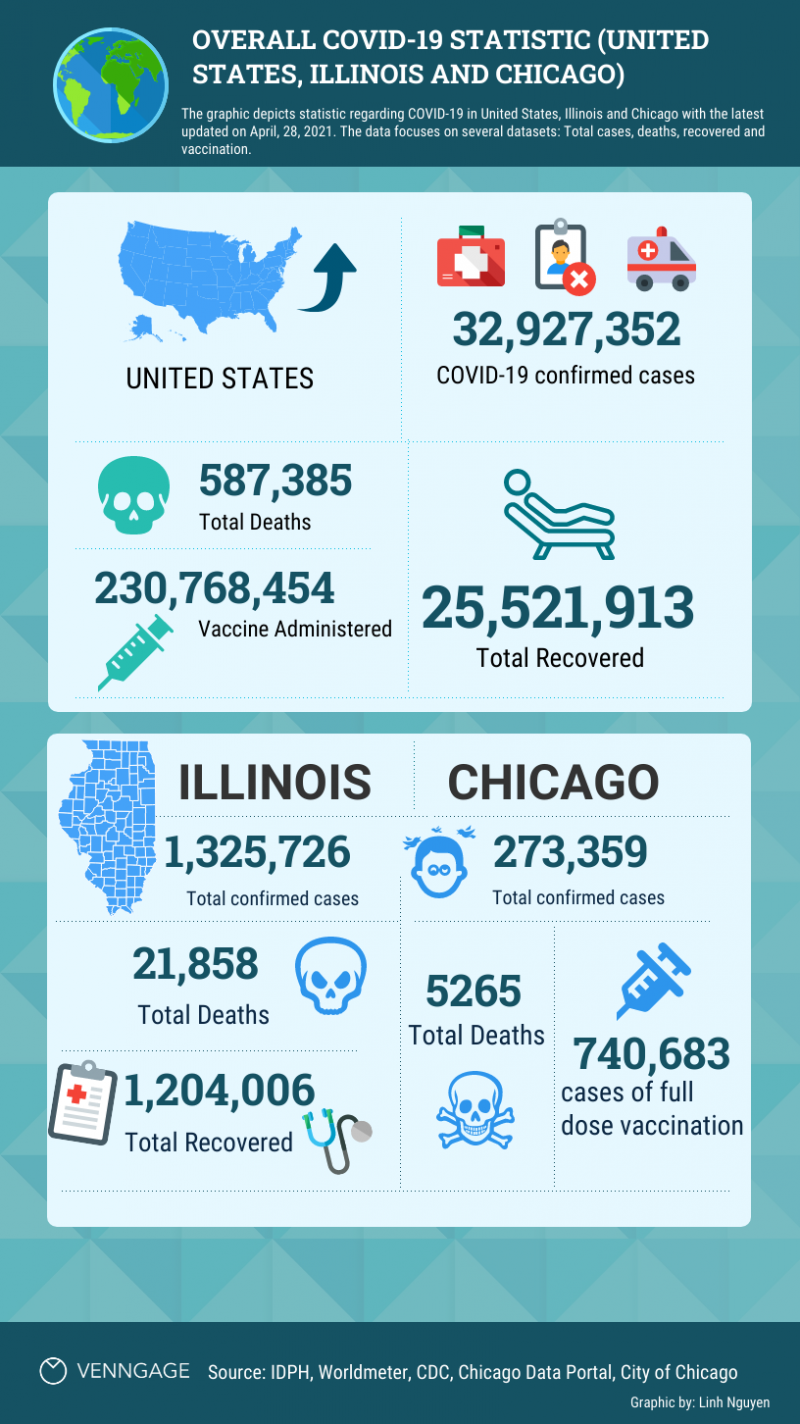