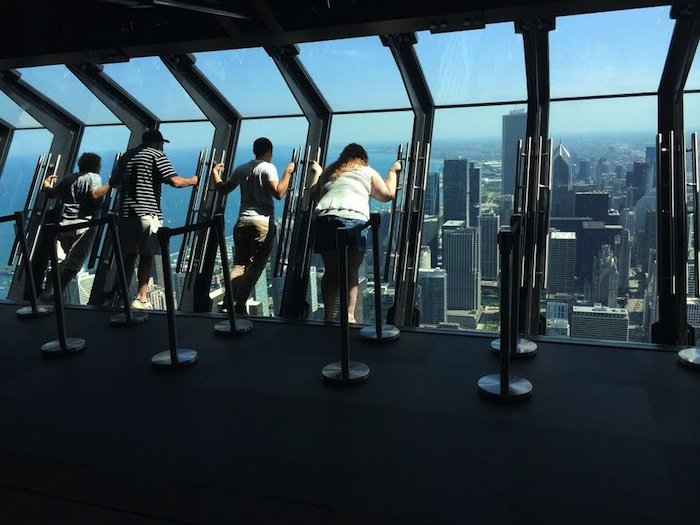 On a balmy evening in late May, the unthinkable happened: The protective coating on one of the glass boxes at The Ledge, Willis Tower’s observation deck, cracked beneath a family’s feet.

The story made national headlines last week, but according to Willis Tower spokesman Bill Utter, the family wasn’t in any danger.

“At no time whatsoever was the integrity of the structure compromised," he told the media.

This news comes just two weeks after the grand opening of Tilt at 360 CHICAGO, formerly the John Hancock Observatory. Located on building’s 94th floor, the attraction tilts visitors on a glass pane to give them a never-before-seen view of the city. It uses an automated system to gradually change the angle of the glass before bringing it back upright.

Dexter Angion sells tickets for Tilt at 360 CHICAGO, and so far, he said he’s been busy.

Angion himself has gone on Tilt “about 30 times.”

“It’s definitely a new experience to Chicago,” he said. “I mean, nothing else tilts you out 1,030 feet above a landmark.”

Angion said he’s not worried about the incident at the Willis Tower.

“That was a cosmetic issue,” he said. “It’s not going to shatter. I know it freaked people out, but nothing’s going to happen like that over here.”

While 360 CHICAGO had no comment regarding the latest incident on The Ledge, it assures that Tilt is more than secure.

“The well-being of our guests is 360 CHICAGO’s number one priority, and Tilt has exceeded all safety standards,” 360 CHICAGO said in a statement. “Tilt is made from several layers of reinforced, glass and precision fabricated steel. Thornton Tomasetti has created an innovative and extremely safe way for adventurists to experience our unparalleled views.”

On May 31, German tourist Bruno Torres visited the John Hancock Building. In between snapping photos of the view from 360 CHICAGO, Torres bought a $5 ticket for Tilt.

“I thought it would tilt more,” he said. “If you see how other people tilt, it looks a bit scary, but when you’re inside, it isn’t that bad at all.”

This was Torres’ first time in Chicago, and so far, he was enjoying the trip. His plans for the day included a boat tour from the Architectural Foundation, as well as some sightseeing on foot.

Torres is one of many tourists coming into Chicago from the United States and beyond. According to data collected by Choose Chicago, the total number of visitors in Chicago last year was expected to reach 48.38 million. This number marked a 4.3 percent increase from 2012 and included hikes among both business and leisure travelers.

These increases are also part of a larger trend. The number of visitors has consistently increased since 2011, and the city hasn’t seen a substantial decline since 2008 to 2009, when figures dropped by 13.2 percent.

The hotel industry is one of many to benefit from these visitors. Hotels earned approximately $1.9 billion in revenue, which was a 4.9 percent increase from 2012 earnings. Choose Chicago also reported that room demand set a record of 9.9 million rooms occupied.

Because of this, the city is steadily increasing the number of hotels it offers. There have been plans to renovate or build nine hotels this year alone, including a handful that opened this past spring and some scheduled for the summer and fall.

Choose Chicago also noted that the city will build a Marriot Marquis at McCormick Place in conjunction with DePaul’s new basketball arena. The hotel is projected to open in late 2016.

But for some officials, these surges aren’t enough. The expansion of Chicago tourism has been a major aspect of Mayor Rahm Emanuel’s vision for the future of the city.

This past January, the mayor announced his ambitious goal of increasing the annual amount of tourist in Chicago to 55 million by the year 2020. According to the mayor’s press release, achievement of this goal will create 30,000 additional jobs in the hospitality industry and increase Chicago’s revenue by hundreds of millions of dollars.

Key aspects of this plan to draw more tourists to Chicago, include a competition to “light the city at night” to keep the downtown area lit up and make Chicago North America’s city of lights. Additionally, the mayor plans on growing the citywide celebration of Chinese New Year, which started this past winter, until it’s the biggest celebration in North America.

Back at 360 CHICAGO, Torres stands against a window that shows off the city’s lake and skyline on a warm spring day. He has visited only one other American city -- New York -- but said he appreciates what Chicago has to offer.