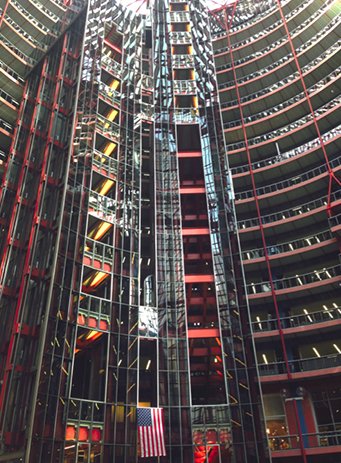 Of the 16 floors in the Thompson Center, only two are fully open to the public. (Photo/Alexandra Oswald)

There's Public Art at the Thompson Center, But You Have to Search

Chicago has public art that the public can’t see.

The James R. Thompson Center, at 100. W Randolph St., has more than 150 pieces of art, yet most are only accessible after surpassing a metal detector and series of security guards.

The Chicago City Council approved the Percent for Art Ordinance in 1978,  stipulating that 1.33 percent of the cost of municipal building construction or renovation be designated to the placement of original artwork on the premises, according to the City of Chicago website.

The task of the Art-in-Architecture Program is to place the art, but once it is installed and the project is complete, the using agency owns the piece, according to Art-in-Architecture Coordinator Linda Norbut Suits. In the case of the James R. Thompson Center, Central Management Services makes all decisions regarding placement of the artwork.

The building is 1.2 million square feet, and online information briefs the public about its permanent art collection funded by the program. The site highlights a list of more than 70 pieces of artwork among 14 floors of the colossal building. What the site does not say is how unaccessible the works are to the public.

People assume that they could take the elevator to any one of the 16 floors to view the pieces, but that is not the case. Only employees of the building can enter the elevators after first walking through a metal detector and showing identification. A security guard accompanies all elevator rides.

One of the artists, Ken Holder—who has his painting, “Into the Canyon,” displayed on the 16th floor—did not know this fact. When informed that his painting is not accessible to the public, he said, “That’s terrible. I didn’t know that.” The last time he saw it, it had been loaned out for the first floor.

The artwork was easy to access in the past, but security tightened after 9/11. According to Doug Stapleton, curator of Art for the State Museum on the second floor of the Thompson Center, security is the main reason that the majority of art from the program is not accessible.

There are few pieces on the first and second floors where visitors are welcome. “Illinois River Landscape,” a 1985 sculpture by Richard Hunt, is located on the second floor.

“It’s a shame, but I can’t argue with the motives of security,” Holder said.

He said he wishes that there were more accommodations for the art and would like to have his painting available for viewing, as that was the original intention of the program.

“The fact that no one sees my drawing is not unusual,” said Robert McCauley, an artist whose painting, “Last Dance,” is located on the 14th floor. “If someone buys a work of mine, I seldom ever see it again. These are not, as some artists cry, "My Children!"  I have a daughter.  She's my child. The artwork is the residue of my daily ‘gotta have it or I'm hell to live with’ discipline. So I don't really care.” 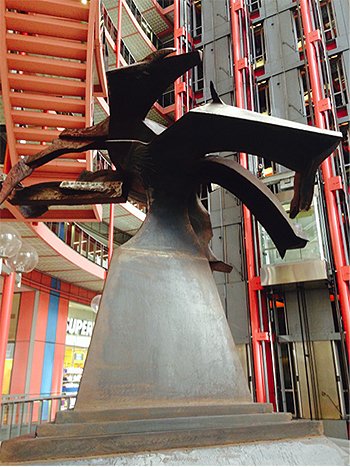 Photo: Richard Hunt’s “Illinois River Landscape,” is located on the second floor. It is one of the few pieces the public can see. (Photo/Alexandra Oswald)

Although both artists said they understand the security reasons, it is still unsettling to compare the original plans for the program to today’s truth.

“The world has changed a great deal in ways that were not anticipated when this program was enacted in 1977,” Norbut Suits said, “and places that were previously freely-accessed public spaces now take a bit more time or effort to access.”

She added how the Art-in-Architecture Program focuses on placing the commissioned artwork in the most easily and heavily accessed places. When the artwork was given to the Thompson Center, it was fully open to the public, but that is no longer the case.

“The entire program has its ironies, contradictions, and questionable methodologies [as do all institutions],” McCauley said.

What he claims to be the “big boulder in a Roadrunner cartoon” is this: “the percent art is paid for by the public.  It's like a bug that only comes out once in 17 years, but you can count on it.  We (taxpayers) have been doing the same thing for a long time.  That is, paying for something that we never get to see or that never becomes actual: farm subsidies for farmers not to grow a crop.”

The program continues to have positive intentions for the city, but the obstacles of our changing world have affected the ability for the plans to be fully carried out. Holder said that it is unfortunate how the state can’t maintain support for what was a great program.

“It was a model program for the state,” he said.

This story was written in Amy Merrick's Intro to Journalism course at DePaul University's College of Communication.