By David Astudillo and Esther Ma

Editor's note: Last names were withheld on the people who shared their stories.

Marissa, a 20-year-old UIC student, has dealt with depression and constant anxiety throughout her teenage years. She says mixes of anxiety and depression were catalysts in her low depressive states, which led to her attempting suicide.

“I would get mental breakdowns but they were rarely strong enough that I would actually do something about it,” she said. “Normally what I would do is if I get a really bad -- I don’t know if I would call it an attack -- I would have like a mental breakdown.

Marissa said suicide was constantly on her mind. But she is not alone -- many U.S. teens are thinking the same thing.

According to Illinois State Board of Education and 2017 Illinois Youth Risk Behavior Survey, suicide is the second-leading cause of death for teens in the United States. According to the study, 17.2 percent of Illinois high school students had seriously considered attempting suicide during the past 12 months prior to taking the Spring 2017 survey. Ten percent attempted suicide one or more times during the previous 12 months.

According to a 2015 Illinois Department of Public Health, 47,000 Illinois youth reported having attempted suicide.

Joanna Strokoff, PhD, a licensed staff psychologist and assistant director for outreach at the UIC Counseling Center, works with a range of ages at the counseling center. She has seen many circumstances surrounding teen suicide cases.

For Marissa, her long series of depression set up the isolation that she felt. This isolation is was something that she felt that she had no control over and made it difficult for her to seek help when she needed it the most.

“At that time, I wasn't really talking to anyone about how I felt, and I would just have really bad mental breakdowns,” Marissa said. “So, when they would get really really bad I would just act on it.”

But she opposed seeking help.

“I did not want any help from my parents,” she said. “I was wanting to pay for my occasion and stuff like that. I don’t know it was stupid to get help.”

According to Reachout.com, one of the key symptoms of depression is lethargy, when doing anything can be very difficult. A child is likely to be in a dark space and feeling cut off from family and friends. Listening and taking action can be difficult.

But many teens who seek help view it as a bad thing due to the labels and stigmas attached to someone who suffers from depression. This don't want to be labeled. 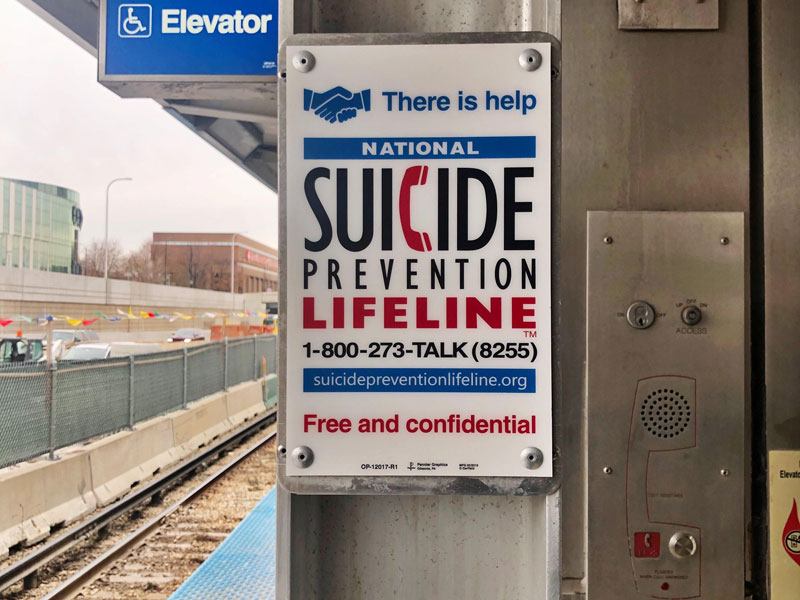 The National Suicide Line number appears on many El platforms in the city. (Photo/Esther Ma)

“Students also report experiences of sadness or ‘going through the motions’ due to longstanding concerns such as family conflict, grief and loss, traumatic experiences, or cultural factors such as certain identities clashing with one’s family/community or experiencing discrimination,” Strokoff said.

Depression and anxiety are very common in teens because that is the time where teens realize who they are, try to find where they belong, and balance school and a social life. Sometimes it does not go as planned and teens go into a state of depression. These teens do not know how to cope in a safe and healthy way because no one is teaching them. They lack counseling.

According to a 2015 study by the Ann & Robert H. Lurie Children’s Hospital of Chicago, hanging/strangulation was the most common method of suicide, nearly two-thirds (64.5%) of suicides between ages 10 and 17.

When a teen struggles to find help, one option they prefer is fixing the issue themselves. But there needs to be someone to help them when they feel suicidal.

For UIC student Nicole, 20, finding these resources to counter her anxiety while attending school was not a simple task.

"Counselors in my high school didn’t promote counseling services either and they didn’t engage people to join peer support groups. The counselors didn’t explicitly say to visit their office if someone were feeling down. In high school, the counselor was the person to visit if someone needed help with their class schedule or college applications.”

If you know someone who is struggling with something there is always a way to help. Some people don’t know where to start on learning what the signs to prevent suicide.

At the Lurie Children’s Center for Childhood Resilience (CCR), “It is vital that we increase public awareness of the signs and symptoms of depression, and the warning signs of suicide for youth, families and adults,” said Colleen Cicchetti Ph.D. Being aware of these warning signs can help detect someone that might be at risk of attempting suicide and you can save a life.