UIC student Mary Ellen Kandu was faced with some difficult decisions when she became pregnant in 2017. At 18 years old, she wasn’t sure she was prepared for what lay ahead.

“Being a teen mom wasn’t something I was ready to do and I didn’t have the resources to support me or my child,” she said. “I knew I had options but I felt very alone in the process.”

Kandu is just one of the many teen moms in Chicago who had to make a tough choice for herself and her future child. Would she raise him alone and forgo her plans for college? Would she get an abortion and deal with the backlash from her family? Or would she opt for adoption and the difficult process of finding the perfect family for her child?

Ultimately, she found a family that was the ideal match for her and her son, but not every teen mom is this fortunate.

“It was a lengthy process that involved interviewing several families,” she said, “I wasn’t even sure if adoption was what I wanted to do, I waited two weeks before officially signing any papers,”. Some young moms might feel scared to start this process alone, or might not even know exactly what their options are.

But Kandu’s story is becoming less common, as a 2017 report from the Chicago Department of Public Health says that teen birth rates reached a historic low in the city of dropping from 72 births per 1,000 women to just 41.

According to the study, the low came after eight consecutive years of decline and in 2014, which at the time the most recent piece of data showed that there were 32 births per 1,000 females ages 15-19 years old.  This was more than a 62 percent drop from the 85.2 rate in 1999.

According to Gutt Matcher Institute, “Abortions in Illinois represent 4.9% of all abortions in the U.S.” Illinois has also seen an increase in clinics that perform abortions, increasing 4% from 2014 to 2017. This is one of the numerous factors in the drop of teen birth rates in Illinois.

Chicago still has a teen birth rate higher than the national average of 18.8 births per 1,000 women ages 15 to 19 years old, but has dropped more than 20 percent compared to the national rate. The city is taking important steps and going in a direction where we see fewer birth rates occurring.

They have seen declines in teen births through all racial and ethnic groups since 2010. African American women are seeing the most drastic decline during that time, dropping from 72 births per 1,000 females to just 41. 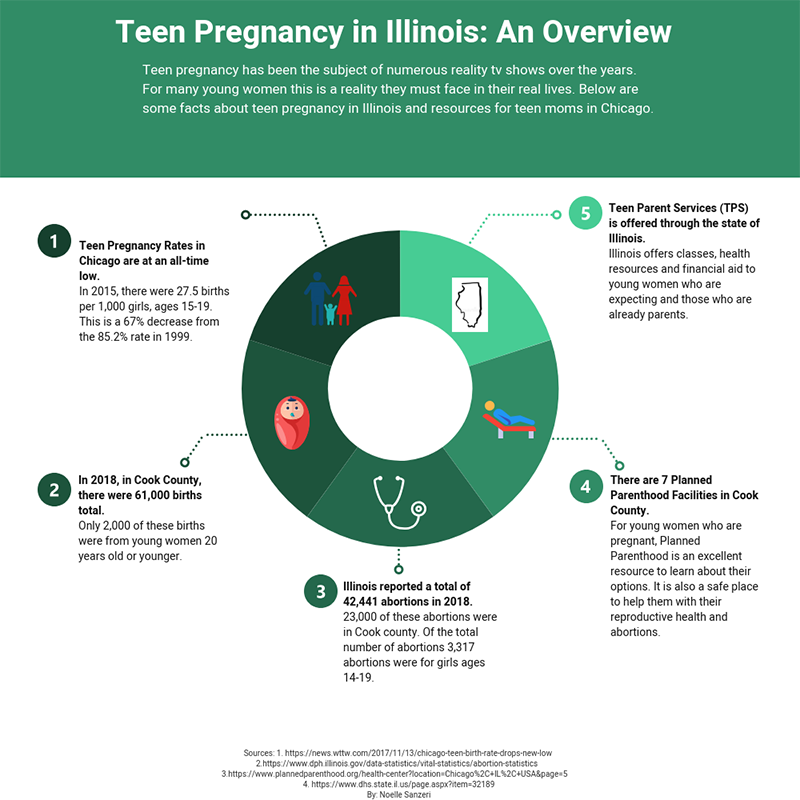 Becoming pregnant as a teen can lead to many challenges for the parents and the child. Studies have also shown that approximately 38 percent of teen mothers earn a high school diploma and less than 2 percent earn a college degree by the age of 30.

When you are faced with challenges of being a teen mother and have to raise a child you have to prioritize your time to take care of another person and not just yourself. Overall, the rates are going down on teen pregnancy in Chicago and more teens are practicing safe sex.

Kandu also works as an online mentor to teen moms, offering support and talking through issues.

“People in this area often don’t feel supported by their families and don’t know what resources are available to them, making an already stressful situation even worse,” she said.

Susan Altfeld who works at the School of Public Health at The University of Illinois at Chicago said cultures vary with values around early parenthood and single parenthood and these factors impact rates of teen childbearing.

Altfeld shared an article from the Chicago Public Schools that said schools “must teach sexual health education every year and every school must have two trained instructors who have completed the district's instructor training.”

Altfeld said CPS districts take learning about sexual health education very seriously and make sure that the curriculum is medically accurate, age appropriate, and comprehensive for students. However, according to ChalkBeat, “150 schools in Illinois, including 22 schools in Chicago, used a sex education curriculum that focused on abstinence as birth control,” as of 2019.

Although abstinence based sex education can be a cause for concern, CPS schools have strict requirements on what must be taught in schools. From Kindergarten to senior year, students are taught about sexual health at age appropriate levels, according to CPS.