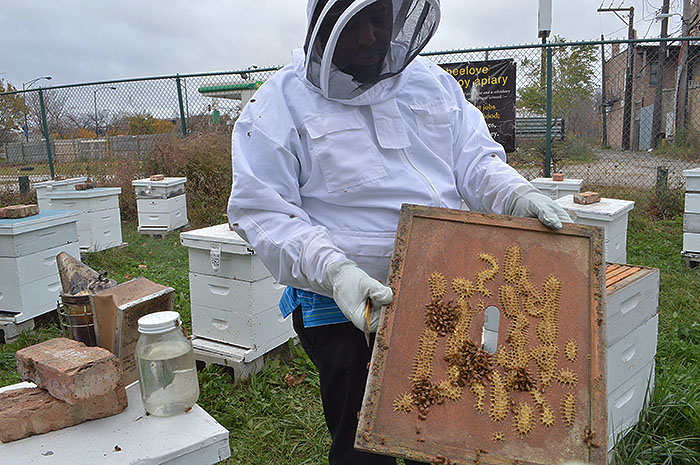 Clifford Covington's work with Sweet Beginnings has turned his life around. Here, he opens a bee hive for inspection. (Photo/Jill Wallace)

By Kamara Fant and Jill Wallace

Clifford Covington’s 11-year prison sentence for attempted murder was complete on Oct. 15, 2010, the most important day of his new life.

It had been three weeks since his transfer to the segregation area that isolated him from inmates, preparing him for release. He stood up as the warden approached his cell, unlocking the door. Neither words nor smiles accompanied the familiar nod. The warden told him to pack his stuff and escorted him to the receiving area. He was going home.

Covington followed two guards down a long corridor, as inmates extended an arm between the cell bars holding up black power fists.

“Good luck my brother. Don’t be no fool and come back. Look out for my mother,” they told him as he headed to the counter to sign his release paperwork.

Today, Covington has come a long way from that small cell where he spent more than a decade. He’s now the assistant general manager for Sweet Beginnings, a social enterprise and for-profit subsidiary of The North Lawndale Employment Network.

“After ex-offenders serve their time, they remain incarcerated socially," she said. "Door after door is shut in your face and eventually, you feel like you don’t belong in the community. I started Sweet Beginnings to serve as a training program and bridge for ex-offenders who could not find work.”

The employment network serves more than 2,000 people annually through their resource and training programs. They have hired 388 people in Sweet Beginnings and less than 10 percent have returned to prison since 2007.

“We track our employees through the Department of Corrections and in 2013, not one person employed with Sweet Beginnings returned to prison,” Palms Barber said.

During a PBS NewsHour conversation on reducing recidivism, U.S. Sen. Rand Paul (R-Kentucky) suggested that “we should rehabilitate people, that people, particularly kids, deserve a second chance. When they make mistakes, let’s get them back into society and working.”

And Covington tried to do just that.

After his release, he tried opening a retail store, but his effort failed. He was used to bringing home several thousand dollars a week prior to his stint in the joint. He worked for Gatling Funeral Homes, picking up bodies and directing funeral processions. Then his parole officer suggested he enroll in North Lawndale’s U-Turn Permitted program, which offers a four-week cognitive behavioral and job training program for returning citizens.

“Sweet Beginnings is not just a nice name," he said. "It’s a chance for me to start my life over.”

He learned how to become a beekeeper and mastered quality control, shipping and handling, and customer service strategies. 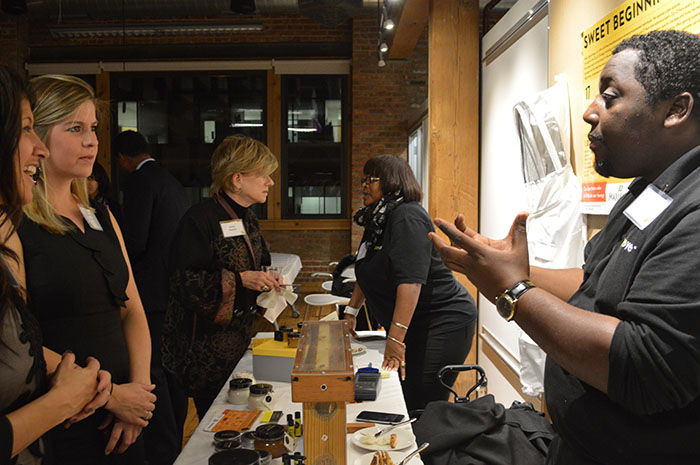 At a fundraising event for Sweet Beginnings, Clifford Covington explains how honey plays
a key role in all of the organization's products. (Photo/Jill Wallace)

Two days before his job ended, Covington was offered a team leader position to train others transitioning from the U-Turn Permitted program. He moved into a second 90-day round in charge of demos at Chicago food stores and events to market the honey and Beelove brand body products. After his second round, he left Sweet Beginnings because funds weren’t available to keep him.

He returned to the community looking for work for five months. Palms Barber offered him the assistant general manager position. He hesitated. Former Sweet Beginnings employee Kelvin Greenwood had given his resignation as assistant general manager because he accepted a position with Ford Motor Company. Greenwood called and asked him to come back to lead the team and manage four apiaries in the Chicago area. Clifford accepted.

Covington is the third of four sons to Regina Rodez and Maurice Covington. He grew up in Roseland watching drug sales and gang wars. In 1994, his family moved near Chicago Avenue and Ashland, an area now known as Ukrainian Village. His father, a heroin addict, went to prison for attempted murder and spent his life absent from his sons’ lives.

Regina became strung out on crack cocaine after her attempts to cope with the pressures of single motherhood failed. Covington and his brothers had to care for themselves. In school, he couldn’t concentrate. He worried about his mother and the eviction notices she eventually stopped opening. She was out looking for a hit.

“My mom had a disease and I was disappointed that she didn’t take care of us. We had to become adults at an early age,” Covington said.

His brothers stopped going to school and got involved in gangs. In one way, school gave him an out, but in another way, going to school caused him to fear that one day he would come home to all of their belongings piled up on the street corner. He had seen that in his neighborhood and decided his family wouldn’t be faced with the same fate. Covington became the bread winner.

At 13, he began selling drugs to keep a roof over their heads. He knew he had to take care of his mother and be the main supplier for the neighborhood.

“I knew that it was pure and not cut dirty if I controlled the supply," he said. "That was the only way I could keep my mom alive since I couldn’t stop her from using drugs."

His revenue from drug sales topped close to five thousand dollars a week.

“There wasn’t a reason to go school," he said. "The kind of money I was making as a kid told [me that] school wasn’t necessary. I was already an entrepreneur.”

Both of his older brothers had been murdered by gang members two months apart, when Covington was 16. A week after his last brother’s funeral, Covington was shot three times and rushed to Cook County Hospital. Next to him in the room was a man named Clifford whose ID had fallen on the floor. He was dead. The doctor came in, picked up the ID and called Clifford Covington’s mother and said, “Clifford was DOA.”

For three days, Covington’s mother thought she had lost a third son. She stopped using drugs. After Covington was released, he pursued the guys who killed his brothers. Gun violence ensued and Clifford was convicted of attempted murder.

Today, he glows when speaking about the second chance with his 14-year-old and infant sons.

“I was the parent that wasn’t there for him. I wrote him. I told him why I wasn’t around for him.” Covington said. “I’m gonna give my sons the best and support my older son’s dream to become a graphic artist.”

As he packs up the Beelove body products and jars of honey, he turns around and smiles.

“In order to get ahead in life, you have to sell yourself," he said. "Sweet Beginnings groomed me for wanting more. It’s sweet to have second chances.”