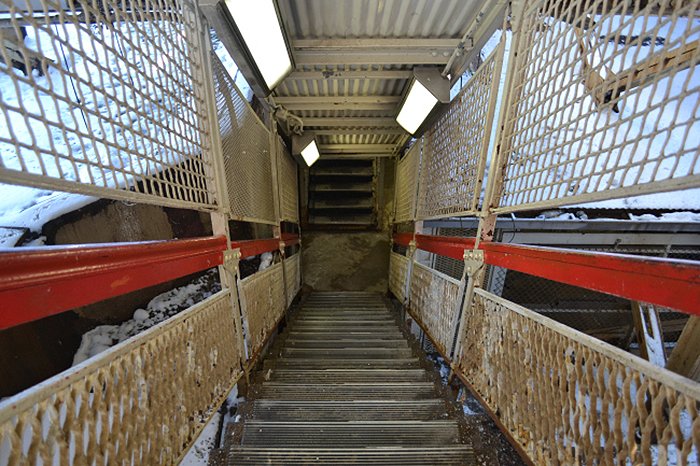 The steps leading down from the Sheridan platform. (Photo/Mandie Lederer)

Shabby Sheridan Stop up for Renovation -- but When?

In 2013, the Sheridan Red Line CTA station received a dubious honor. Citing its inaccessibility to people with disabilities and overall griminess, it was named the city’s worst CTA El station in the RedEye Going Public’s 2013 Crust Station contest.

Although Mayor Rahm Emanuel announced in April 2012 the station would be receiving $17 million in renovations, the station has yet to see any work. According to the CTA, work on the station has not been started yet due to an Environmental Assessment which calculates the potential impact that the renovations will have on the community, natural environment, and historic resources.

The Sheridan stop has long been under scrutiny for its lack of handicap accessible and largely uncovered platforms, providing major detriments to those with disabilities and during inclement weather.

Those who use it regularly often criticize the Sheridan station when compared to more modern stations nearby including the Belmont and Addison stops.

“The Sheridan stop is definitely not as nice as the Belmont and Addison stops,” said CTA rider George West. “Its mainly wood and the rest of the stops are made of concrete. It just doesn’t seem as sturdy.”

Other riders worry about the inaccessibility for those with disabilities. The stop has no elevator or escalator, only two flights of semi-exposed steps that access the northbound and southbound platforms.

Said West: “I wouldn’t use the elevator, but there are a lot of elderly people, especially out near the lake, that would really benefit from having an elevator.”

Local business owners say the poor state of the Sheridan stop often affects their business and customers. Several businesses in the 3900 block of North Sheridan Road rent space from the CTA near the tracks, which curves parallel to Irving Park Road for a short stretch before turning northbound to the Wilson stop in Uptown.

Emerald City Coffee manager, Chelsea Hall said “it is just difficult sometimes with the running of the shop. We actually rent from them, like the CTA owned properties, and they’re kind of messy. It is nice being connected to the stop, but everyone knows that this is kind of one of the more rundown stops. Everyone hopes that it’ll get renovated sometime soon.”

The planned renovation for the Sheridan stop is part of a $1 billion overhaul, including federal, state and local funding for the Red Line. However, most focus is being put on a complete reconstruction of the Wilson station.

I think they’re focusing on Wilson first because it’s a stop that needs it a little more,” West said. “The neighborhood isn’t as nice and by renovating the stop it may improve the area there. Also, there’s a ton of shopping centers around there, including a Target; those place may get more business if the stop was a little nicer.”

Some riders of the Sheridan stop also said that the station’s problems don’t necessarily impact their decision to use the train. Rider Nathan Busch says the Sheridan stop is the closest to him, so he doesn’t plan to stop using it despite the needed repairs.

Others, like rider Caitlin Wilson, say that they may use other methods of transportation because of the inconveniences that the Sheridan stop provides.

“I live only five minutes away, but would have to climb up all the stairs to get to the platform,” she said. The Sheridan stop’s platform steps are exposed, protected only by a chain-link fence that provides no protection from the elements.

West agreed, saying, “I would always rather take the bus. However, if improvements were made on the train station, I would reconsider taking it more often. Especially when I grocery shop. I go to Aldi, one stop north, and bringing back groceries to the Sheridan station is a hassle, It’s difficult to walk down all those stairs with handfuls of groceries.”

The CTA has not released an official word as to when they plan to start the reconstruction on the Sheridan station. The Wilson stop renovation has been pushed back a couple of times, but is slated to begin sometime this year. The Sheridan stop will hopefully follow.