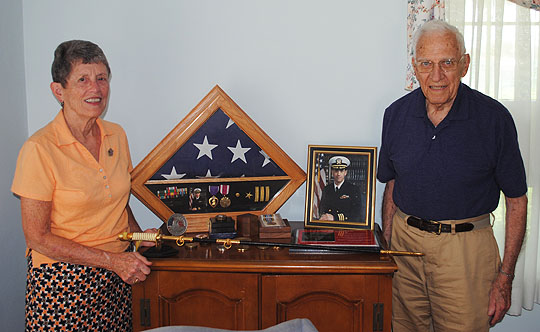 Pat and Don Shanower remember their son, Dan, every day
with this memorial in their Naperville home. (Photo by Matt Schwerha)

“My husband and I were discussing where we would want to be buried, and Dan walked in the room and in his off-hand way said, ‘Well, I know if it was me I would want to be at Arlington [cemetery].’ So there was no doubt.” – Pat Shanower, on her son, Dan, who
later died in the 9/11 terrorist attack at the Pentagon.

Don and Pat Shanower have lived in their downtown Naperville home for 53 years and raised five children there. Their second-youngest son, Dan, grew up as the mischievous one of the bunch.

“Dan was a crazy kid. Humorous,” Pat said. “Anybody who went to school with him would remember him as the clown.

“We have had teachers at a couple levels say it was hard to keep the class in order when Dan was around, but they couldn’t help but laugh themselves.”

His life changed when he entered the U.S. Navy in 1985 and pursued a career in intelligence.

“It was like the Navy was what Dan needed to fully become an adult,” Pat said. “We feel fortunate because we knew where he wanted to be,”

The man, who was described as an average student in his younger days by his mother, had grown to be, according to one of his graduate school professors, one of the most brilliant students he has ever had in the Naval War College.

The Shanowers’ lives changed forever 10 years ago on Sept, 11, 2001. That morning, terrorists crashed American Flight 77 out of Washington Dulles International Airport into the section of the Pentagon in which Dan worked. The crash killing 184 military and civilians, including all on board the flight.

“We couldn’t believe it,” Don said.

Mike Reegan, a Fairfax County firefighter who was on the scene, helped the Shanowers better understand the condition in which their son was found.

“He found Dan sitting at the table with other members of his CNOIP [Dan’s official title was Chief of Intelligence Plot for the Chief of Naval Operations],” Pat said. “[Dan’s team] had received word about the twin towers being struck, and Dan took the news to the admirals in another room and then returned to start working the intelligence about the towers.

“Of course, you know all the what ifs. If he had stayed in the room with the admirals, he would be alive. But he came back to do his job and was seated at the table with the other members of his group when the plane hit directly.”

Lasting memories of Dan fill Don and Pat Shanower’s home. A memorial from his Navy days, artifacts from Thailand, where he had traveled, and many other mementos remind Dan’s parents of the son they lost -- and the life he led.

Pat remembers the holidays as a family favorite for Dan and all of his relatives.

“The highlight of Christmases for his nieces and nephews was always the strange things that he would bring them from overseas,” she said. “Once he brought a stuffed iguana to one, a machete to another. He was always the highlight when he came home.”

Having no spouse or children, Dan took to treating his nieces and nephews as if they were his own.

Dan’s niece, Molly White, daughter of his sister, Victoria, has closely followed in her uncle’s footsteps. White graduated college this spring and became extremely interested in the military. She was an intern at the Naval Intelligence Office in Washington, and recently started full time in July.

“She is there as a civilian, but is with the same people [Dan] worked with,” Pat said. “She has made friends with some of the people who remember him. One woman in particular said, ‘Your uncle was my mentor, so I am happy to be yours.’” 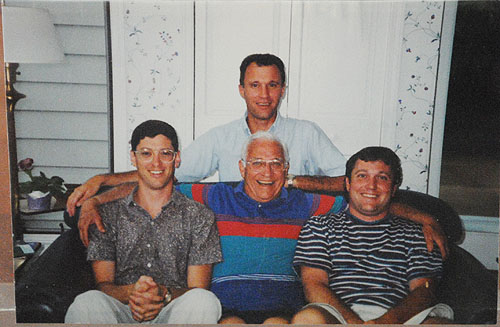 Despite their world seemingly coming full circle, a void still remains in the hearts of Shanower’s parents and the rest of his family.

Dan would have turned 50 this year, and despite having his life cut short, he lived every day to the fullest, family members say.

But no matter how much Dan accomplished, Pat said, it was still difficult to bury their son so young.

“We miss him terribly.”