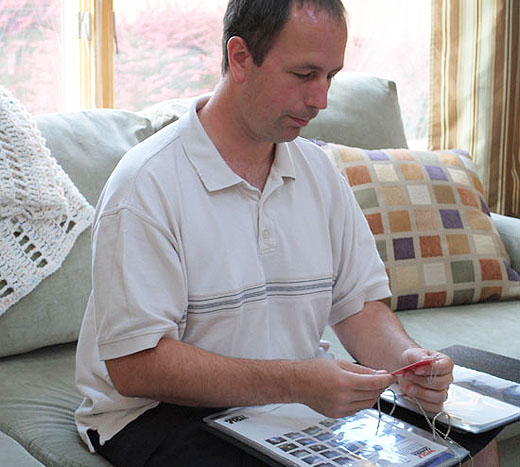 Steve Serb looks through a scrapbook of photos and other memories from
working at ground zero after 9/11. (Photo by Holly Pennebaker)

Firefighter and EMT Steve Serb arrived at the Chicago Fire Department and started a routine equipment check at 6:30 a.m.

But this was no ordinary day.

A little after 8 a.m., Serb glanced at the firehouse television. But today –  the morning of Sept. 11, 2001 –  the TV was showing something he did not think was news footage at first.

“I saw commotion,” Serb said. “I thought some Bruce Willis movie was on. There was explosion, debris, and a building was involved. I thought ‘Die Hard’ was on.”

Serb and several of his fellow Chicago firemen at Chinatown’s Engine 8 station watched the second plane hit the World Trade Center’s South Tower. He realized it was something very real.

For the next hour, Serb watched the coverage and finished his equipment check as the Sept. 11 terrorist attacks unfolded.

“We were mesmerized in a very bad way,” he said.

A third plane hit the Pentagon, and a fourth – United 93 – was reported missing. Serb said he looked out the rear door of the firehouse, and eyed Chicago’s tallest skyscraper, the Willis Tower. Serb and his crew originally thought the fourth plane may have targeted the former Sears Tower, rather than Washington, D.C.

With close to two years in the field, Serb said he felt panic grow from watching NYC firemen run, as this indicated how dangerous the attacks were.

Serb said: “We don’t run. We have to carry so much equipment. If we run to or away from something, we’re too exhausted to help at a scene. You can’t run with 100 pounds of gear on.”

That morning, 2,974 people – including 343 firefighters and paramedics -- died in the attacks on the World Trade Center, according to the New York City Fire Department.

Immediately, Serb arranged for upcoming shift coverage for travel to ground zero. There was no collective indication, but firefighters made individual decisions to go, he said.

So Serb and five other Chicago-area firemen took two cars to ground zero on Sept. 12 without hesitation or sense of danger. The men, strangers to each other, grabbed gear and hit the road without packing, not even toothbrushes, nothing but two spare fire department T-shirts.

The team traveled well above speed limit. Police came up from behind, and saw fire helmets in the car. Instead of pulling them over, they helped escort the crew to New York City, Serb said.

When they arrived in New York City 13 hours later, Serb recalled looking up to where the twin towers should be and seeing nothing but rubble. Barriers of debris and thick smoke complicated search and recovery efforts into the site.

Serb expected to board a fire truck to free up help. However, he was soon digging through concrete dust, paper scraps, steel and other debris with a bucket line of firemen, civilians and volunteers. 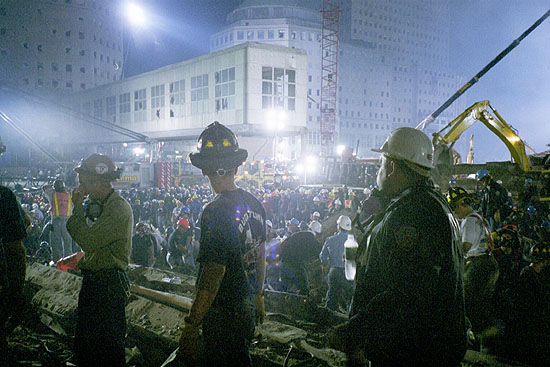 Steve Serb shot this photo as he and other firefighters worked through the rubble at ground zero.

As Serb recalled, after two days of 16-hour digging shifts, officials determined that there was no one left to save.

“We weren’t looking for victims anymore, but [for] families,” he said. “It was about giving people a piece of mind, and families a funeral.”

A piece of a telephone and a battered computer hard drive were the only recognizable office equipment Serb found.

“In the first 10 minutes of digging, I came across a square green sign, floor 100 from the Trade Center,” he said. He set it aside, but it disappeared.

There was no glass anywhere, Serb said. The force of the collapse pulverized everything. South Manhattan was cut off from lights, water, power, traffic and subways. The sounds were eerie, and usual big city noise was quiet, he said.

Cranes dug through debris piles in an evacuated lower Manhattan. Serb turned away when equipment dug where firemen knew their friends had been trapped.

When Serb and his fellow firefighters could not dig because machines were working in the area, they turned a local deli into a tool shop for workers. It had a walk-up window where guys would come for gloves, socks, hammers, shovels and other needs.

“One of the guys took a big piece of cardboard, hung it up and it read Home Depot!” Serb said.

Serb said his most difficult memory is not digging through rubble and finding bodies, but rather a TV clip of Buckingham Palace with “God Bless America” playing during prayer vigils.

He remembered being overwhelmed when driving down a westside highway around 3 a.m., passing families holding signs reading “you’re my superhero.” People were cheering throughout the night with nonstop support.

Serb, who's now a fire engineer and EMT, said that even today he still feels the overwhelming response from the tragic event.

“This horrible event of hate really catalyzed this incredible outpouring of love and compassion with everyone in America doing everything they could to help,” he said. “I would never wish this event on anyone again, but I wish we had that compassion all the time.”

Firefighters’ bonds became a long-living brotherhood, something that’s been well-documented throughout firefighting history. On 9/11, they just showed up to help without asking, unknowing if they would even be needed. Making themselves available individually is what the firefighter’s brotherhood is all about. 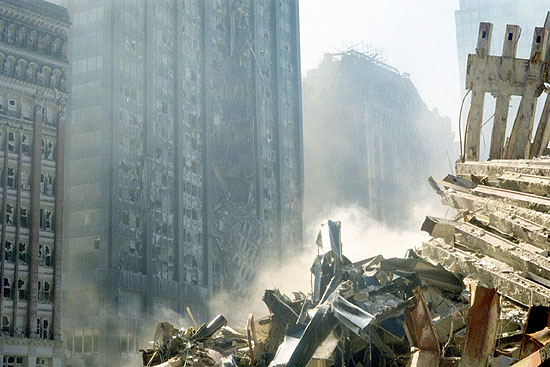 Steve Serb shot this photo of the Deutsche Bank building,
which was severely damaged when the towers fell.

Every year since the tragedy, Serb, a Chicago native, and hundreds of other firefighters gather annually at ground zero for a memorial. Serb and his group have been back every year, and they will be there for the 10th anniversary on Sept. 11.

The memorials are a pilgrimage, and Serb said he goes to continue supporting the FDNY and others still living with a legacy. Names of those killed are read, bells are rung signaling the hits and collapses. Serb sees the same guys every year that come from all over the world, including England and Italy.

The gathering celebrates relationships built at ground zero. Everyone who returns shows support for what has come to be a family, Serb said. Some people may not know each other, but they learn that their family is a lot bigger than they thought it was.

“The brotherhood is made up of men and women who have many different reasons to become a firefighter, but every single one of them has done it because they wanted to do something bigger than themselves,” he said.

“They can go anywhere. They can walk into any firehouse anywhere in the world, and they’ve got family.”