Why is Chicago's Lakefront Washing Away?

As water levels continue to increase over the past seven years, some areas along the lakefront are eroding away, causing fear with vanishing beaches and issues with residents and their homes.

Lakefront owners are worried about increased water levels as it is starting to affect property. Areas like Rogers Park, Andersonville, and South Shore have been some of the most-impacted areas. The current reading for water levels in Lake Michigan is on average 581.54 feet for this year.

As for last year, the average was a bit higher with a reading of 581.64 feet. Although water levels dropped they are still well above the long term average line that sits at 578.9 feet.

Max Berkelhammer, an environmental professor at the University of Illinois at Chicago, said rising precipitation levels is the primary cause of the rising lake levels at Lake Michigan.

“The causes are relatively simple,” Berkelhammer said. “If you think of Lake Michigan as a giant bathtub, there is water coming in from streamflow, groundwater, and rain. Then, you have water coming out from evaporation and also some rivers that run out of the lake.

“So, when you have rainfall increasing like we have had and increasing rainfall is happening faster than losses of water, then you basically start to accumulate water and it just keeps rising.”

The damage from storms and crashing waves have raised a lot of concerns amongst residents who live on or near the lakefront.

“There’s a park close to where I live, Berger Park,” said Jennifer Misiurewicz, who has lived in a building on the beach for the past two and half years near Berger Park. “There was a storm last year that completely washed away the whole walking path.”

“It got hit with a bomb, you know like a tidal wave,” she said. “The entire path was washed away and there were less rocks keeping the lake from the park area.”

Misiurewicz is one of the few lucky residents who haven’t experienced any tremendous flooding or damage to her building caused by the massive waves during storms. Other residents haven’t been so lucky.

“Down at the base of our building because there’s no sand,” said Mindy McGuffee who lives in a high-rise building on the lake near Berger Park. “There’s no rocks, it's just the lake and then these steel barriers, and then concrete of our fishing dock and parking garage. So, when the huge waves are really slamming, I have felt the building shake.”

“I think it was last October that was the worst. The waves beat up our submarine door, so water got in our garage, our garage flooded, there was like a foot of water in it. Every time it got wavy after that, because our door was messed up, it would happen all over again. That has been sorted out, thankfully.”

Many other residents have struggled with funding for repairs and have called the city for action.

Leslie Perkins, chief of staff for Ald. Maria Hadden (49th Ward) that covers Rogers Park and parts of West Ridge, said the office is in “close communication” with the Department of Transportation, Chicago’s Park District and Congresswoman Jan Schakowsky about securing additional federal money to come up with a comprehensive plan for Chicago’s entire shoreline.

The additional federal money requested could reflect the total amount in damage to the shoreline.

“The lake is really unique because it has multiple jurisdictions, so it does have to be kind of this overly bureaucratic process,” Perkins said.

Although the city is making progress in securing funds to restore and protect the shoreline, the funds will only go towards public property.

“Unfortunately, even if we get the federal money, it will only go toward public property,” Perkins said. “Private property owners are still responsible for any sort of engineering projects that they want to install.”

Juliet Dervin, who is one of the three founding members of the South Side Lakefront Erosion Task Force and creator of South Side Lakefront Facebook page, lives in South Shore in a co-op building on the lakefront. She mentions that about a year ago, they started suffering terrible damage to their property.

“As a private property, we are responsible for whatever is needed to protect it,” Dervin said. “It’s turning out to be quite a significant sum.”

Dervin’s efforts, along with other residents of South Shore, to secure funding have been inspiring.

According to the Block Club Chicago news site, South Shore residents took state officials on a tour of the neighborhood’s lakefront as they try to secure funding to protect private homes from worsening erosion.

“We are waiting to hear whether we will be considered for a federal grant through the Federal Emergency Management Agency,” Dervin said. “They have money set aside for pre-disaster mitigation.”

This decision could possibly take longer than expected under the current circumstances, but Dervin and the rest of South Shore still hold onto hope. 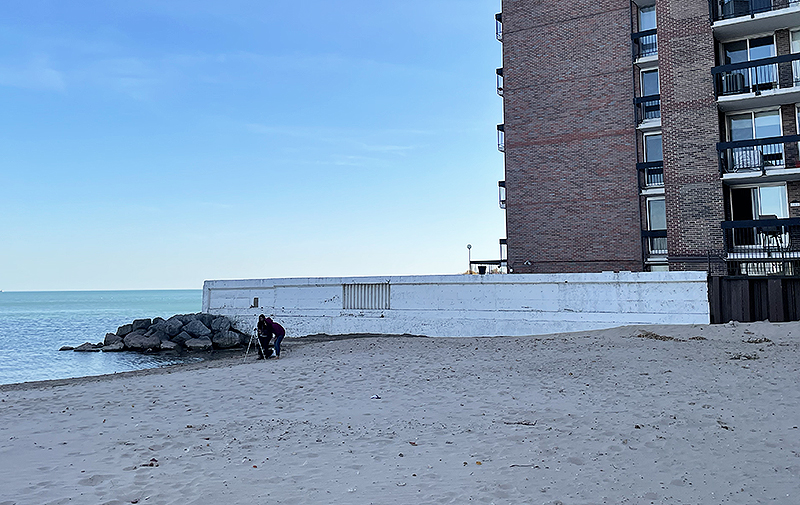 Recently, residents near the lakefront have been placing large rocks along the shoreline in hopes of reducing flooding risks.

Berkelhammer warned that if no action is taken by the city to address this issue, they run the risk of Lake Michigan damaging the infrastructure along the shoreline and the closure of some of the beaches.

For example, high water levels at Lake Michigan pose a serious threat to visitors looking to swim at the many beaches along the lake. Especially to young children or inexperienced swimmers who can drown.

Water levels in Lake Michigan as of the month of November have been declining. It is normal to see the water level decline during this time of year due to low precipitation.

As both the North and South sides are waiting to hear back from pending funding opportunities, residents near or on the lakefront can connect with their Alderman for temporary assistance or stay connected with other like-minded members of the community through neighborhood Facebook pages.

Dervin’s Facebook page, South Side Lakefront, provides extensive information on the issue in efforts to raise awareness on how to help the South Side’s lakefront.

Dervin said her page's goals are to “help people be aware, connect and act."

“We just need to do our best,” Dervin said. “Make our best effort in getting the right information to our leaders, so they can make the right decision.”