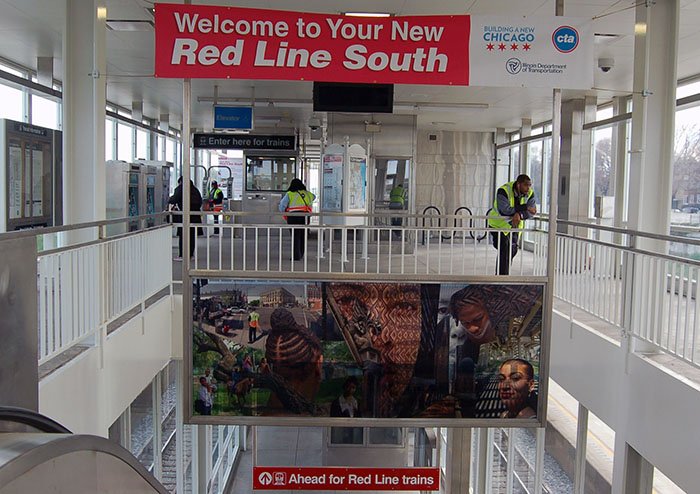 The most popular word along the rails of the rebuilt Red Line south branch on Sunday was “smooth.”

Both commuters and CTA workers were pleased with the results of the $425 million project on its first day of operation and seemed to be on the same page with city officials who promised improvements to travel times and station amenities.

Auburn resident Cassandra Coleman even skipped her normal commute on the Green Line to try the reconstructed Red Line out of curiosity.

“I came with an open mind and I was very happy with it,” Coleman said. “It’s definitely smoother, faster.”

According to the CTA, the new South Branch will cut round-trip travel times by up to 20 minutes between 95th Street and downtown. On Sunday, a one-way commute took approximately 25 minutes.

Coleman said the improvements were worth the five-month wait, which she said was very quick for the construction that began on May 19. The CTA estimates it saved $75 million and years of construction by completely shutting down the Red Line’s South Branch rather than offering partial service.

Ryan, an Englewood resident who asked to be identified by first name only, rode the south branch to work from the Garfield station at 6 a.m., two hours after the line officially reopened.

“I didn’t even know it was there,” Ryan said. “I didn’t even hear it. That’s how smooth it was. Before, the ride was very rocky.”

Lakeview resident Ryan Hynes said that he appreciated the facelifts the stations received, although the re-routed shuttle buses to the Garfield Green Line station, which were organized to accommodate riders during the reconstruction, were more convenient for his commute to school at IIT.

Many CTA workers shared the commuters’ enthusiasm for the rebuilt branch.

Desiree Archie, a combined rail operator, praised the speed of the new tracks, which have cut out slow zones on the south branch. Trains will now be able to operate at speeds of 55 mph along the stretch, an improvement over the 15 to 35 mph slow zones.

“The tracks were so ragged and needed to be replaced,” Archie said. “Now it’s like ‘zip, zip, zip.’”

Jerry Coleman, a customer service assistant, said improved hydraulics are helping to get trains on and off the platforms faster. Coleman also said the return of the Red Line to the South Side is positive for the community.

“The Red Line is a huge asset,” Coleman said. “It runs directly through the city. We need it.”

The project replaced over 10 miles of 44-year-old track bed on a stretch known as the Dan Ryan branch between the Cermak-Chinatown station and the 95th Street station.

The nine individual stations also received facelifts, including elevators being added to the Garfield, 63rd and 87th stations, making the entire south branch accessible to people with disabilities. Art installations were also added to some stations.

“The art helps the aesthetics of the station and shows the diversity of the city as well,” Mark Stubblefield, a transportation manager for the station said.

“The first thing that caught my eye were the various intersections,” Stubblefield said.