By Emily Brosious and Qudsiya Siddiqui

With the slow zones now history, Deidra Williams' ride on the Red Line South Branch no longer qualifies as a half-day adventure.

“The reopening has been a lot smoother than the old ride was,” said Williams, a commuter who takes the Red Line from 95th to get to school in the Loop. “It used to take me about two hours to get to downtown and now I reach downtown within 45 minutes.”

The Chicago Transit Authority's Red Line South Branch construction was different from other CTA renovation projects. Rail service was completely shut down on May 19 from Chinatown/Cermak to 95th Street, for the largest rail construction project in the transit authority’s history.

During the five-month closure, crews replaced the entire 10.2 mile track bed and renovated six of the eight stations. The new rail is much faster without “slow zones” that once troubled the South Branch. New trains can reach speeds of up to 55 miles per hour.

“I think it’s good that they reopened the Red Line. There was too many people on one El and it scared me,” Richardson said. “I used to think the El was going to fall, so many people were on it.”

Red Line South Branch commuters Lenard Richardson and his daughter get around
easier since the Red Line reopened. (Photo/Emily Brosioius)

Among the station improvements are digital screens at every station platform that notify commuters when trains will be arriving.

Initiatives undertaken by the CTA to install security cameras at the stations have resulted in an improved station environment that El riders say feels noticeably safer.

Rhondalyn Buchanan works in the Loop and takes the Red Line daily from 79th Street. She said the new trains are smoother, cleaner, and appear to have less “delinquent behavior.”

“A lot of undesirables are not around anymore because we have more police presence and it’s also just a cleaner atmosphere,” Buchanan said.

Commuters and business owners along the South Branch are relieved with the timely and glitch-free reopening.

The CTA provided free shuttle busses to help commuters reroute during the Red Line closure. Still, some businesses along the South Branch said they lost customers during the construction.

Phil Chen, manager at MingHin Cuisine, said business at his well-established restaurant known for late-night dim sums dropped by 15 to 20 percent during the rail closure.

“Many people use public transportation to get to Chinatown and the closure affected everybody,” said Chen.

He said business has come back a little since the reopening, but not completely.

“I don’t think that most people are informed that the Red Line is open,” Chen said.

The economic downturn has been hard on profits, Hu said, and the Red Line South Branch closure was the last nail in his shop’s coffin.

“Chinatown is a tourist attraction in many cities, but it doesn’t do more attention here,” Hu said.

Businesses like his need the city to do more to promote tourism to Chicago’s Chinatown, he said.

But Sharyne Moy Tu, associate executive director of Chicago Chinatown Chamber of Commerce, had a different story to tell.

“We are pretty much a haven for foodies,” she said. “People come to Chinatown a lot for the restaurants and I think they will come down here no matter which way there is.”

A representative for CTA said that publicizing the re-opening to commuters was a huge component in the success of this project.

“We had extensive government community outreach, engaged with local alderman and communities to keep them informed of the project status,” an official said.

Along with numerous press interviews, the transit authority placed advertisements at key locations, specifically where people catch the shuttle buses, to let residents know about the re-opening, she said.

In an earlier interview with The Red Line project, Stephanie Hart, owner of Brown Sugar Bakery in Bronzeville expressed fears that the closure would go on longer than expected and decrease her business.

The popular neighborhood bakery is off the 79th Street stop. Hart said the closure didn’t hurt her customer base because most of her customers drive.

“The main way that I was affected by the rail closure was by my employees, I worked a lot of shifts,” she said. “Them getting to work, moving around, dropping off children at school, and having to reroute that way with shuttle buses.”

Hart said she was pleased, if somewhat surprised, that the project completed construction on time. Her bakery does the most business during the holiday season and she said it was important that the Red Line reopen before the holiday rush.

“I’m really happy that I don’t have to test the theory that the closure would affect me financially because they’re open before my holiday season,“ she said. 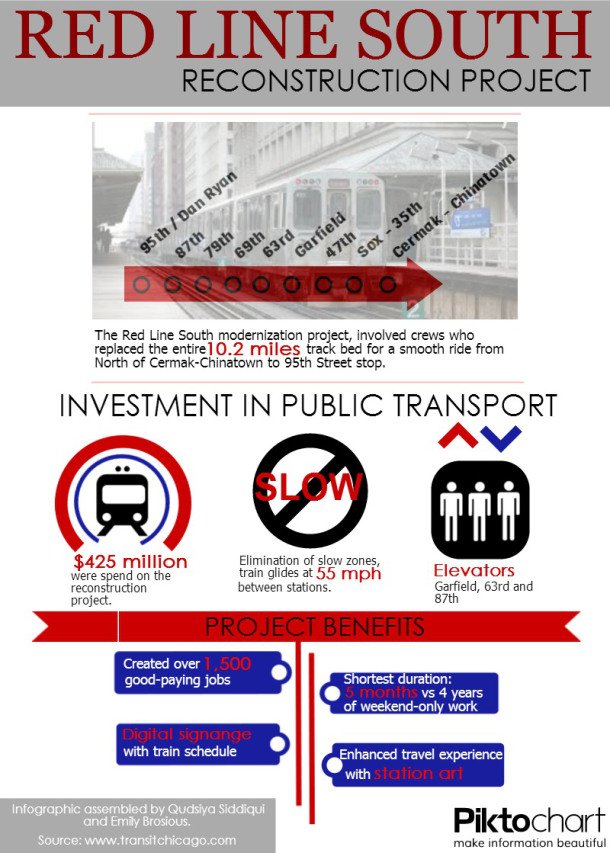