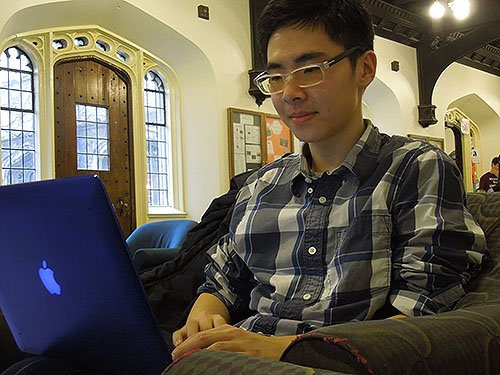 Freddy Tsao, a first-year University of Chicago student, says he will rely on the bus system
during the Red Line closure to avoid using the Green Line. (Photo/Ody Suarez)

U of C Students Wary of Green Line Option

Some University of Chicago students say they will be hesitant to take the Green Line train during the CTA’s five-month reconstruction of the Red Line South Branch, which begins May 19.

“I’ve heard people talk that when it gets dark [it can get] sketchy,” said Amanda Sestito, a third-year economics major.  “My roommate hates going to the Green Line because she heard there’s a lot of violence there.”

The closure also places some strain on first-year students who are just beginning to adjust to their transportation methods.

“[The Red Line] was the first thing I learned how to work with so I stuck to it,” said Freddy Tsao, a first-year undecided major.  “I’m a little annoyed because [now] I don’t know how to get to Chinatown.”

Tsao says he’s fully aware that the Green Line has become the main traveling alternative, but hearing the dangers when going to the stations has dissuaded him from using the train.

“I don’t think I’m going to use it,” he said.  “I think I’ll just stick to buses once the Red Line closes.”

The project will close nine stops starting at Cermak-Chinatown and stretching to 95th/Dan Ryan. Tracks along these stops will be replaced entirely. The five-month closure is expected to more than triple ridership on the Green Line, according to CTA officials.

Accommodations are being made for residents impacted by the closure, which include transferring Red Line routes to Green Line tracks.

Students, however, were quick to say that the Green Line is “sketchy” unlike the nearby Red Line Garfield stop, which some young commuters say is well lit and on a main road.

“The 63rd/Cottage Grove stop is closer to the gun [and] gang violence that has plagued the media headlines all year, so I think that contributes to students' uneasiness,” said Celine St. Pierre, a third-year biology major.

The university is located in Hyde Park, where muggings and gang violence are common in some of the nearby communities.  Earlier in March, a man was beaten to death while standing on the 43rd Street Green Line platform in Bronzeville.

“[The Green Line stops] also require walking a few blocks to get there,” St. Pierre said. “People feel more at risk when traveling by foot. The neighborhood of the Garfield Green Line station is also deemed unsafe, so having to stand around and wait sometimes for over half an hour for the 55 bus to bring you back to campus also makes people uncomfortable.”

To avoid facing those problems, some of the commuters said they plan to take  local bus routes, including the No. 2 (Hyde Park Express), No. 4 (Cottage Grove) and No. 6 (Jackson Park Express) to travel to the northernmost parts of Chicago.

Additionally, students are told to avoid using their headphones and always be on alert while waiting at certain stops.

The CTA has devoted a substantial amount of time improving local Green Line stops prior to the closure. According to the Chicago Tribune, the $20 million project upgraded the line’s tracks, incorporated more security cameras with better lighting at the Garfield station, as well as repaired elevators, escalators and stairs on the Ashland/ 63rd stop for the increased foot traffic that is to come.

47th Street is one of six Green Line stops that will see extra traffic from the Red Line.
(Graphic/CTA)

During construction, university students will face prolonged trips to popular destinations such as Chinatown and downtown Chicago. What once took a 20-minute train ride on the Red Line could now double in arrival time, especially during rush hour.

“I ride the Green Line pretty often,” said Adam Khan, a third-year classics and Germanics studies major.  “It is pretty sketchy particularly the western side of the tracks.”

Khan recalled a specific trip where a previous passenger urinated inside the train, leaving him to endure the stench for the remainder of the ride.

He frequently travels to the downtown area to complete paperwork for his upcoming study abroad trip.

“I think it will be a mess,” he said.  “Ultimately I think it will work out once they are finished with adjustments to the system. You really can’t help, but make a mess into something so heavily traveled.”

St. Pierre sees the Green Line transfer as an opportunity to rid commuters' negative attitudes toward the line. St. Pierre said she has no problem adjusting to the change. She is a frequent rider of the No. 6 bus, which is an express route to the downtown area.  According to St. Pierre, the University of Chicago Police Department patrols the nearby Green Line stations while student residents populate the adjacent communities.

“There’s a bubble,” she said.  “No one wants to go to the Green Line because it’s outside of that bubble.  This will force people to break out of the bubble and realize it’s not so bad.”