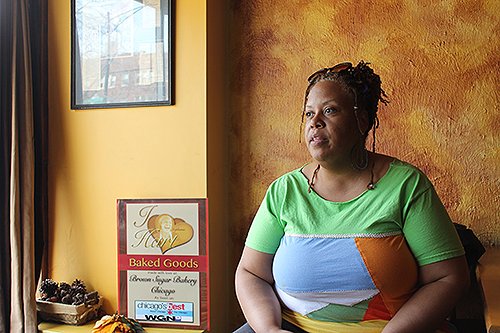 Stephanie Hart, owner of Brown Sugar Bakery, shares her concern about the Red
Line construction and how it could impact her business. (Photo/Ali Trumbull)

When the Dan Ryan branch of the Red Line closes for renovations on May 19, the owners of businesses near East 75th Street say they are going to spend the next five months struggling.

One of the city's most important transportation lines, the Red Line will be shut down southbound from the Cermak-Chinatown stop to the end of the line at 95th/Dan Ryan.

East 75th Street, located in the Greater Grand Crossing neighborhood, is a few blocks away from the 79th Street stop. Business owners and their employees not only have to change their daily routines, but also hope their businesses continue to thrive.

While Stephanie Hart owns a neighborhood bakery, she says her customers come from all over the city.

“The concern with us is that people find new places to shop when it’s not convenient,” said Hart, owner of Brown Sugar Bakery at 328 E. 75th Street. “These people aren’t from the block. No one walked here today. I can almost guarantee you that no one walked here.”

Another business, Original Soul Vegetarian, is popular with college students from different schools throughout the city. Owner Arel Brown said that 45 percent of his business comes from people who commute from the North Side of the city for their vegan and vegetarian cuisine.

A big concern with a lot of Red Line commuters is the amount of time it will take to get from one place to another during the renovation. One of Hart’s employees at the bakery, Shakemma Buchanan, has to purchase a car for her family.

“We take the train from 79th to 55th two times a day,” said Buchanan, a cashier and cake decorator at Brown Sugar Bakery. “It’s [going to] be crazy just to even get them to school and back home with this shutting down for five months. I have to work harder, less time with my kids because I have to make sure I can pay the rent, we need a car, gas money.”

This won’t be the first time transportation construction has impacted the businesses of East 75th Street. Brown and Hart said that in 2009 the entire street was closed down for sewer and plumbing repairs.

“It kind of killed our business,” Brown said. “And when our business went from, I would say, doing fairly a thousand dollars a day to doing about three hundred dollars a day, and it’s because nobody had nowhere to park. When people came and put their blinkers on, they’d get tickets. It was just the grace of God that the history we had.”

Brown’s business has been open for more than 30 years and was started by his father, Prince Asiel Ben Israel. Hart thanks social media for her business remaining open during the 2009 construction.

“Just that little edge, it kept me from going out of business,” Hart said.

Hart along with other business owners on the street came together during that time and used social media to market to everyone they knew in order to keep shoppers coming to 75th Street. Businesses along the street would offer discounts and support their fellow business owners’ shops. They called themselves Renaissance Row, something Hart plans to bring back during the Red Line construction as a marketing strategy.

“We’ve been here before, we know how to do this,” Allen said. “And the challenge is going out to provide the leadership that it takes to bring people together on the common interest of, ‘this just ain’t about me, it’s about all of us.’ And the same formula that it takes to save one business in Grand Crossing, will be the same formula that sustains the rest of those businesses.”

While Allen recognizes the value in social media, he believes that these businesses need to collaborate and utilize grassroots means of communicating in order to survive.

“So I challenge the business community to put their heads together,” Allen said.  “And no one person can fund it on their own but if everybody pulls their resources together, there can be a collective team that supports how to educate the surrounding community of Grand Crossing on how to continue to support these businesses through the CTA development challenge.”

The renovations to the Red Line South Branch are part of Mayor Emanuel’s Building a New Chicago program, which promises CTA riders a faster, smoother commute and updated stations with elevator accessibility. The CTA says the Red Line will be under construction for five months.

Business owners are waiting to see how this development will impact their livelihoods, all of them unsure what could be at stake financially. Although she’s concerned about the businesses of 75th Street, Hart is determined they will continue to prosper.

“Seventy-fifth Street is going to thrive during this closing because the people are going to be so aware that this is an important area and that it is important to be supportive during this time that they’re [going to] come out and support,” Hart said. “That’s how I see it.”