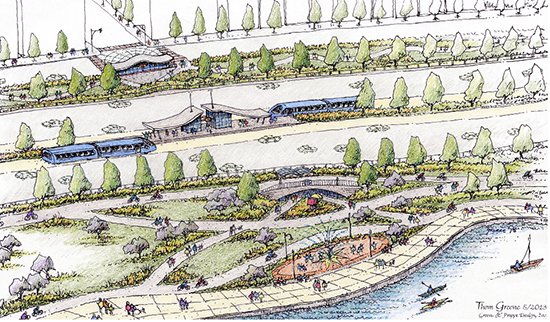 A rendering of what the lakefront along North Lake Shore Drive could look like.

As part of an exploratory phase to renovate North Lake Shore Drive and areas of the lakefront, Chicago residents seized the opportunity this week to suggest their own ideas for improvement at three community meetings around the city.

The meetings signaled the beginning of the Redefine the Drive Project that will overhaul the seven-mile corridor between Hollywood Avenue and Grand Avenue on the North Side. The current study phase of the project, which received $20 million in earmarked funds from the Illinois Jobs Now plan, will last through 2016 and will encourage continuous public participation.

“It’s a once-in-a-lifetime opportunity and we have to be sure we get it right,” said Dan Burke, the Chicago Department of Transportation’s deputy commissioner.

Though construction is still far off, with an early start date of 2019, the meetings gave the public an understanding of the project's enormous undertaking -- which is expected to cost hundreds of millions of dollars -- and provided the city a clear picture of resident concerns.

The scene at the meetings, held at Gill Park, Truman College, and the Peggy Notebaert Nature Museum, resembled an operating theater for urban development. North Lake Shore Drive was dissected with aerial photos and laid out in pieces across the rooms between rows of posters detailing its storied history (the infrastructure was constructed in the 1930s as part of the Works Progress Administration Program) and its lingering ailments (congestion, vehicle collisions, dated bridges). 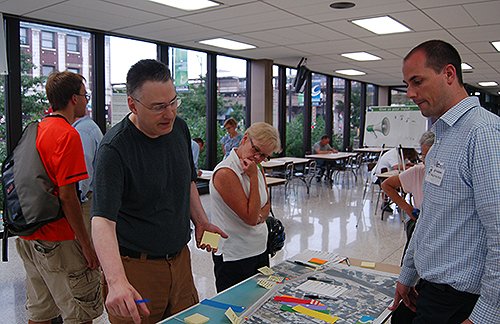 Those attending the meetings were encouraged to use sticky notes to suggest improvements and mark sensitive areas on the drive while transportation representatives for Illinois and Chicago ensured residents that no ideas are off the table, but none are on it either.

Among the most popular suggestions were lower speed limits, improved bike and pedestrian trails, better access to the lakefront, and increased light rail stations.

At one meeting, Mattheis Carley, an East Lakeview resident and cyclist, saw a pattern as he looked over the aerial photo of Montrose Harbor, blanketed with sticky notes that said,  “This is a park, not a parking lot” and “Extend beach trails north.”

“Looking at the photos, I see a shift away from cars,” Carley said. “We’re still stuck in car mode, but we’re at a tipping point.”

"It's a once-in-a-lifetime opportunity."

Carley hopes the project improves access to the lakefront for cyclists, pedestrians and people with disabilities.

“One of my favorite places is the Montrose bird sanctuary, but it’s not connected to anything,” she said.

Mark Nielsen, the assistant deputy fire commissioner, attended Wednesday’s meeting at Truman College to ensure that emergency vehicles will have access to Lake Shore Drive during the construction.

“The drive will be accessible during construction so there will be accidents,” Nielsen said.

According to the Federal Highway Administration’s 2012 Five Percent Report, there were 1,165 crashes per year on North Lake Shore Drive, 17 of which were fatal, between 2007 and 2011. 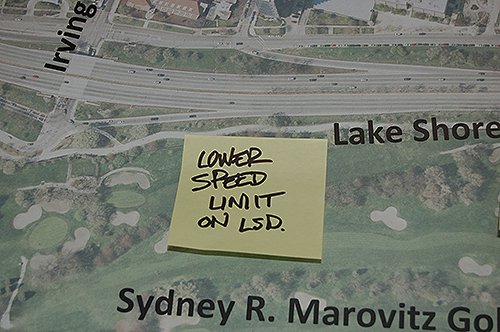 John Baczek, the project and environmental studies chief for the Illinois Department of Transportation, cited crash data as an important factor in deciding that Lake Shore Drive needed to be renovated.

“If you’re looking at one thing, it’s always going to be safety,” Baczek said.

Other factors included a number of bridges that were not up to code with the Americans with Disabilities Act, increasing rush-hour congestion, and costs of repairing of Lake Shore Drive piecemeal.

“Many of the bridges are simply getting to the point that they’re outliving their usefulness,” Baczek said. “Fiscally, it’s not a good use of our limited resources to keep repairing the drive.”