Predominately LGBT+ neighborhoods exist across the world as safe havens for queer residents. In Chicago, Boystown has been that refuge for many generations of queer Chicagoans.

However, in recent years, Boystown has shifted significantly. Gay bars have been replaced with mainstream restaurants, rent prices have skyrocketed, and many of the longtime residents have been displaced.

Adding on to these changes is the neighborhood’s new name and branding -- Northalsted.

Conversations around changing the neighborhood’s nickname began online over the summer when organizer Devlyn Camp started a petition to retire the name Boystown. Camp cited instances of transphobia, racism and sexism in their call to action.

With the Northalsted Business Alliance ending the use of the name Boystown in September, what are the implications of the name change and the history of this North Side neighborhood? 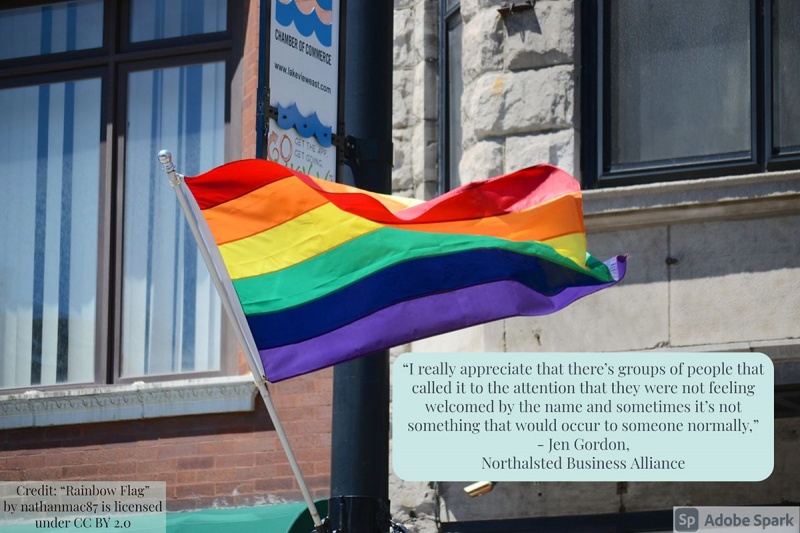 Boystown has always been known as a diverse, inclusive community. However, the recent petition from Camp emphasizes how some members of the LGBTQIA+ community feel welcomed by the name.

In a 2020 online survey by the Northalsted Business Alliance, about 80% of participants stated that they didn’t feel welcome by the name ‘Boystown’. With the name change, many organizations acknowledge those who have spoken up about this issue.

Jen Gordon, the public relations representative for the Northalsted’s Business Alliance, was one of those who expressed gratitude.

From one perspective, the name change represents a more inclusive future for the neighborhood. Professor Curt Winkle of College of Urban Planning and Public Affairs at UIC said, “I do see this name change ... from Boystown to Northalsted, as a positive change. It's truly intended to be more inclusive. I don't think it's this commercial association turning away from queer, gay identity. But, I think it is fixing what I think is a serious problem of exclusion.”

And, as Gordon said, “Northalsted is strictly based on location. But really, we like to use the tagline “Chicago’s Proudest Neighborhood” so we feel like that's a very inclusive, welcoming, and positive marketing slogan to use.”

However, some community members aren’t so fond of the new name.

Northalsted resident David Bishop said it weakens the “identity and connection to the queer community.” He sees it as part of a “cultural shift” that is intended to “effort to tone down even what is left … of the [neighborhood’s] queer identity.”

Beginning in the early 1960s, gay men were drawn to the Lakeview East area because of cheap rent and access to downtown. Throughout the early 1900s, the area was a predominantly Latin-x space. At this point, the neighborhood was referred to as “New Town.”

The history of the neighborhood is strongly connected to the activism and counterculture of the late 1960s and 1970s. In 1970, the community held the first Chicago pride parade to commemorate the anniversary of the first night of the Stonewall Inn protests.

Throughout the rest of the century, the gay identity of the neighborhood expanded. The nickname, Boystown, was popularized in the 1980s.

In the 80s, the Chicago Pride Parade was hosted in Boystown, where it still hosted every year. More gay bars and resturants opened shop along Halsted Street. The neighborhood increasingly created a place of belonging for queer people in this time.

By 1997, the city of Chicago “designated it an official gay village.” It was the first of its kind, and, in 1998, rainbow pylons throughout the neighborhood embraced that title.

Since the turn of the 21st century, the neighborhood has maintained its queer identity and continues to be a hub for queer businesses. However, a variety of causes have shifted the demographics of the neighborhood.

For many residents, it feels like the queer identity of the neighborhood is shrinking. On a positive note, this could be because gay neighborhoods are less necessary to the survival of queer individuals as queer rights are expanded throughout the country and world.

However, other reasons for shifting demographics include the displacement of original residents as the neighborhood undergoes gentrification. High rents and changing housing stock has pushed some residents out of the neighborhood.

While the future of the neighborhood is uncertain, its past has solidified its importance in queer history and gay activism.

The Future of Northalsted

Lakeview East is not alone in its fight against gentrification. Many Chicago neighborhoods have experienced extreme changes in the last two decades -- most notably, Pilsen, etc., etc.

And, it is unlikely that Chicago’s Proudest Neighborhood will disregard its identity anytime soon. The neighborhood will continue to host June’s Pride Month events and home to many queer landmarks.

As Winkle says, the rainbow plaques, sidewalks, and signs are all a part of “preserving [the] heritage [of the neighborhood].”

However, as rent rises and residents are displaced, Bishop fears that the resources and history of the neighborhood will only be affordable to straight families and “affluent, white, college-educated, gay men.”

Although it’s a personal choice whether you want to use “Boystown” or “Northalsted”, the location will always be a place where individuals will feel welcomed by those around them.

“I think that one of the things about Northalsted (Boystown) that has always been great is that it’s always been a place that’s welcomed by all walks of life and it’s something that we received visitors from all across the world to the neighborhood,” Gordon said. “So to me it’s a positive and welcoming space.”