By Laaiba Mahmood and Hajra Qaiser |

The Chicago Civilian Office of Police Accountability has seen an increase in complaints against officers since summer protests against police brutality, an analysis of data show.

Since June, 520 of the complaints filed with COPA were designated protest-related, accounting for 18.85% of 2,758 total complaints through October.

Protesters led demonstrations across Chicago demanding justice for George Floyd, Breonna Taylor, Ahmed Arbery and other people of color who were killed as a result of actions of police officers. Protests in Chicago had heightened police presence. Simultaneously, total complaints with COPA against police officers rose, from 375 in May to 823 in June.

William McCarty, criminology, law and justice professor at University of Illinois at Chicago, said that the relationship between an increase in complaints and protests with high police presence is not exactly clear.

“When you have mass collections of people protesting you have the increased likelihood of officers interacting with community members,” McCarty said. “This provides the conduit through which those engagements can be complained about by community members.”

McCarty added that interactions between police and civilians are seasonal, and that there is usually a spike in metrics when more people are out. However, this summer was distinct from years past due to the coronavirus pandemic and protests.

In June, COPA received 823 total complaints against CPD officers, in comparison to 465 complaints in June 2019 and 334 in June 2018. Among the June complaints: 204 were for Fourth Amendment violations and 187 were related to the excessive use of force.

Chloe Brougham, a student activist at DePaul University, was a bike marshal at the July 17 Black and Indigenous Solidarity protest where demonstrators attempted to remove the Statue of Christopher Columbus in Grant Park. She encountered aggressive police.

“I was toward the outside so I wasn’t by the original conflict, but all I started to hear was the sounds of people telling us to cover our eyes because there was pepper spray,” Brougham said. “The first thing I noticed was that they were targeting Black individuals, particularly Black youth and Black femmes. When I would step between it was almost always I was defending a person of color, particularly a Black person. I watched them hit several people with batons and I was hit with a baton several times.”

At one point, Brougham was part of a bike barricade, and officers rushed the bike marshals. Her bike was taken by a CPD officer and used to hit her multiple times. Brougham did not file a formal complaint or immediately go to retrieve her bike from CPD custody because it would have consisted of a violation of her Fourth Amendment rights. She finally reclaimed her damaged bike on Sept. 20.

UIC Sociology Professor Andy Clarno said that people generally believe that there is a low likelihood of police being held accountable for their misconduct so they are not likely to report it. He said that part of the reason people were protesting was in order to call for holding police accountable for the excessive use of force, possibly explaining why more complaints of misconduct were filed against CPD officers this June in comparison to past years.

“This summer people were calling police out and insisting that every violation be reported,” Clarno said. “So what we see this summer [is that] the number of reports is probably a more accurate representation of the type of force that gets used on a daily basis, but it was being reported more often because people were trying to make a point to hold the police accountable.”

“What the challenge is with complaints data is, does this reflect egregious or overzealous behavior by the police or is this a frustration by the public with their constant sort of bombardment of intrusions into their privacy by all of these officers,” McCarty said.

Although complaints are one metric to measure interactions between people and police, complaints do not result in conclusive action. While complaints may be lodged with COPA, they are not always considered founded, meaning they were not considered as an official incident in the eyes of the law.

According to an analysis of data from the City of Chicago Data Portal, 21.6% of complaints filed with COPA since 2017 are regarding the excessive use of force. Of these complaints, 54% are pending COPA or CPD review, or overall investigation.

The Invisible Institute’s Civilian Police Data Project found that of 57,570 allegations of excessive use of force since 1988, only 2,135 complaints were sustained, or found to have enough factual evidence for it to be considered a violation. Of sustained complaints, 1,719 resulted in disciplinary action.

When the city does address misconduct beyond disciplinary action, settlements and payouts consist of taxpayer money. The Chicago Reporter’s Settling for Misconduct database tracks payouts the city has made to settle complaints against CPD officers.

“When the city has had to settle complaints about misconduct, the city pays out millions of dollars every year to settle these complaints which don't come from the police budget,” Clarno said. “That money should be paid out—people who have been abused by the police and have had their rights suspended should be compensated. But it’s another example of the way all of us are held responsible for the actions of the police and they’re not held accountable.”

CPD is currently operating on a federal court-approved consent decree calling for reforms to the department, due to previous history of misconduct and lacking accountability.

Although officers are not frequently held accountable for complaints against them, they still tend to make officers nervous.

“Officers are so afraid of [complaints] because they really think they are going to get fired even though it never happens,” Burke said. “That’s why it has turned into this whole trail of ‘don't do anything.’”

CPD has previously implemented reforms such as body cameras, but these have only enabled further misconduct by officers.

“I know that some people believe body-cams are a way to help hold police accountable,” Clarno said. “But what we’ve seen not just in Chicago, but across the country, in the last several years is a very consistent pattern of police not turning on their cameras or not turning on their audio at the times when it could be useful. So instead the body cams have become largely used as a tool for policing, for surveillance and for holding citizens accountable rather than police.” 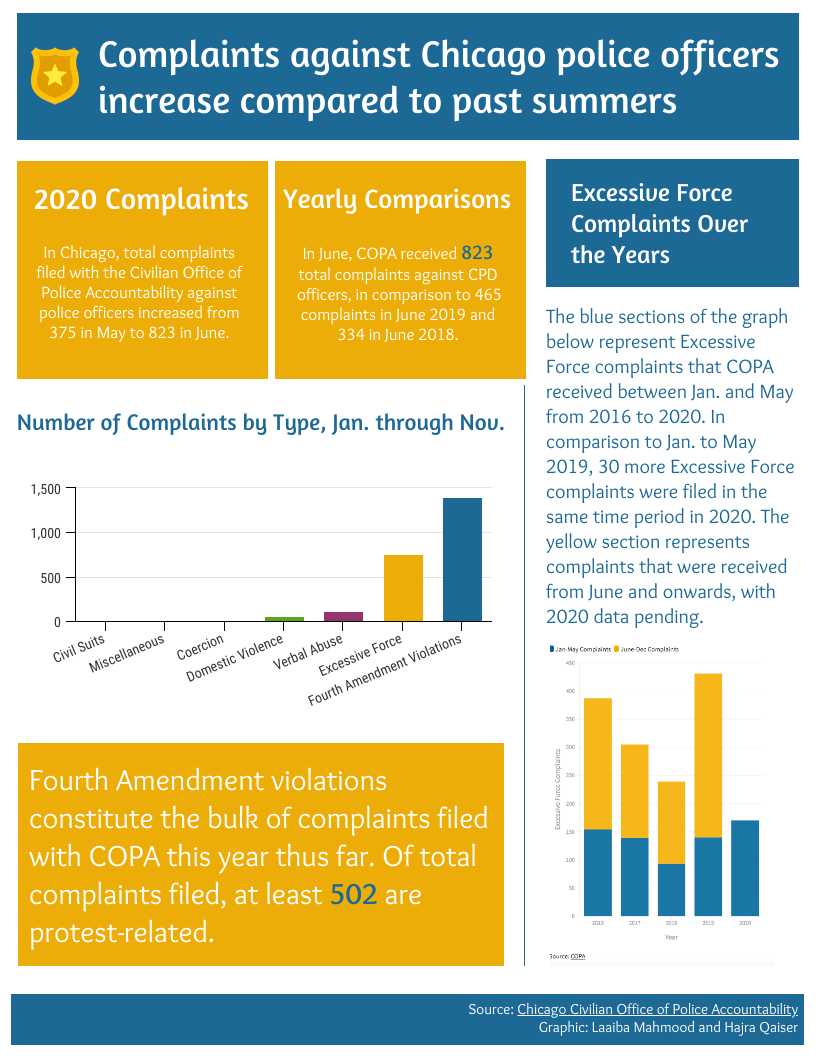