By Julien Acosta and Fernanda Gonzalez | 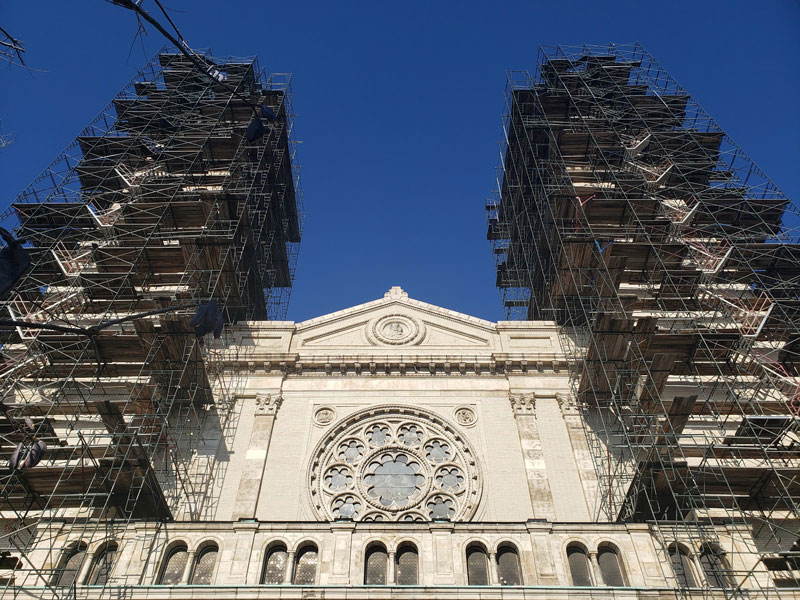 Members of St. Adalbert's Parish in Pilsen say they hope to organize and sustain the place of their church in the community. Their actions will serve as a precedent for nearly 100 other churches planned to close by 2030 in the Chicagoland area.

St. Adalbert's Church, a marker of community in Pilsen for over 100 years, is known for its grandeur of its towers and the historical significance. But it was deconsecrated by the Archdiocese of Chicago July 15 and will no longer be used for worship. This is due to understaffing, a lack of funding and shrinking congregations throughout Chicago Catholic churches.

Julie Sawicki, the president of the Society of St. Adalbert’s said, “I don't think he [the Cardinal] understands the ties of the Polish community to our churches here. It's critically important to us, it's not only a deep testament to our Catholic faith or deep faith, but it's part of our heritage. So we feel like our heritage is being destroyed, that it's been taken away from us. This [church] is a gift not only to the Catholic community, but a gift to the City of Chicago.”

This final deconsecration comes as another phase in the struggle to reclaim the land for the local community’s interests. Community members want to make their voices heard and avoid fading into the background as other parishes are forced to close.

The deconsecration and sale of the land to City Pads is contested by the St. Adalbert's Preservation Society as well as the Society of St. Adalbert's. Both organizations work to preserve the sanctity of their worship space through direct community action. Community members have mobilized their rights in the Vatican as parishioners and as citizens of Chicago since word of the Church closure reached them in 2016.

St Adalbert’s Church was scheduled to close in February 2016. At this same time, five other parishes were consolidated in Pilsen in order to combat shrinking congregations, understaffing of priests and lack of funding. Three churches were left in Pilsen to serve the community; St. Pius V, St. Paul, and St. Procopius.

The Chicago Academy of Music made an attempt to purchase the property in 2016. They hoped to use part of the property as student housing and repurpose the sanctuary as a concert hall. St. Adalbert parishioners did not agree with this plan and staged protests to have their voices heard.

The planned purchase by the Chicago Academy of Music fell through in 2017 due to its inability in securing funding, according to Blanca Torres of the St. Adalbert's Preservation Society.

Upon this deal falling through, a bidding war was launched for the property and a local developer, City Pads, came out on top with a final bid of roughly $4 million. City Pads already has negative public relations in Pilsen due to their removal of a public mural and their inaccurate claims of affordable housing units.

City Pads representatives claimed it will restore the church and towers to public and accessible use. The rest of the property will be used for housing, with City Pads dedicating 20% to affordable family housing.

Blanca Torres, vice-president of the St. Adalbert's Preservation Society, said she's concerned about the proposed renovations to the property. She emphasized the right of parishioners to petition the Vatican and archdiocese in order to avoid “fading to the background."

She said the St. Adalbert's Preservation Society wants to be included in the considerations for the uses of the land.

Torres said, “we are willing to listen and help the owners if they will address community issues and needs", if the sale is eventually finalized. She stressed the need to address communal issues and not focus solely on profit. She also said that the the St. Adalbert's Preservation Society hoped to maintain the sanctuary as a place of worship above all else.

When asked about working with the buyers of the property, Sawicki said, “that's not even possible. We are fighting for the church to remain a sacred space, I don’t think City Pads understands Canon law.”

Not all organizations devoted to saving St. Adalbert's have the same long-term plan, but their primary goal is the same.

Sawicki said that City Pads can not sustain the church as it is because they have no ties to Catholicism, if the church is purchased by an outside developer, it can not continue to sustain the community of faith in Pilsen.

The disruption of their communal space has left many parishioners feeling abandoned by the archdiocese and led some to question their faith and the authenticity of the church's claims.

Bobak emphasized how damaging the church closure has been to his experience of faith: "From what is going on in the last five years it's really suspicious where the church is going you know, it's going like more Protestants in a way. It happened 500 years ago, one day, they split so it looks like it's going to happen right now".

Bobak highlighted the uncertainty that parishioners are experiencing and brought to question the stability of the church while facing mass closures.

This is because the congregation was misled by previous leadership. Andy also mentioned that the previous cardinal, Cardinal George claimed, "the church is not supposed to be ever closed.” Parishioners put their trust in their past leader and hoped the new leadership would address the needs of their community.

Many parishioners of St. Adalbert's pray and protest in hopes of changing the fate of their sanctuary. They say the community's trust will be irreversibly damaged if their right to petition is not addressed.

Cupich was not expected to finalize any sales or close the church without addressing all petitions for the property. However, that’s exactly what happened. The church was closed and the Cardinal made plans with City Pads for the sale of the land. As of publication, the Vatican has not reviewed the case.

The final sale of St. Adalbert's has yet to be announced and protesters hope to delay the sale in order to find a means of saving their beloved church. The parishioners say they hope for the property to benefit the surrounding community, whether or not it remains holy land. With gentrification on the horizon, this mission should remain at the forefront to avoid pushing more of the primary community away from their homes.

How to Get Involved

The St. Adalbert's Preservation Society has started a petition for any community members interested in helping their cause. They hope that through changing the zoning laws, a different outcome will occur for their parish.