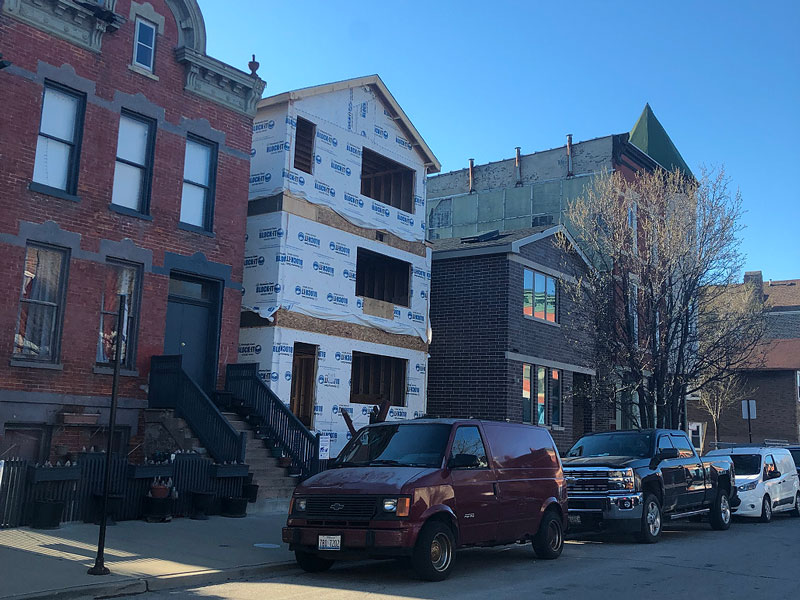 Not All Are on Board with Pilsen Gentrification

By Jennifer Pesole and Claudia Flores

She said old buildings are being replaced with new, modern housing complexes that seem out of place.  She noticed an increased police presence, more homeless Hispanic people and more white people.

Hays said she believes that these changes are because developers buying property at low prices, then rebuilding and selling at “exorbitant” prices with higher property value.

“[Developers] completely disregard the people in the neighborhood in the name of profit,” she said.

As new people move in, they are in need of housing as well, so they are not seen as the cause of the problem.

“It’s a horrible cycle perpetuated by profit-driven developers that would never even think of living in that neighborhood themselves,” she said.

Historically, Pilsen, a neighborhood in Chicago’s Lower West Side, is known for its rich Mexican culture.  Since the 1960s, Mexican residents moved into the area and it became Chicago’s first majority Mexican neighborhood. Pilsen has also been an area targeted by developers because of its close proximity to downtown Chicago.

While development constantly aims to improve neighborhoods for residents, but sometimes it creates so much economic change that it leads to gentrification.  As new buildings pop up, property values and taxes increase, pushing out longtime residents who can no longer afford to live there.

Pilsen was targeted for urban renewal in the 1980s, which began when a Czech developer “planted a beachhead of gentrification,” according to Professor John-Jairo Betancur, who works in the University of Illinois at Chicago’s Urban Planning and Policy Department.  “This beachhead was followed by spillover gentrification in adjacent areas until much of the area surrounding this cluster was gentrified.”

This gentrification has continued steadily for the next few decades as aldermen and the city approve zoning changes, property conversions, and new developments.  Larger, more expensive housing, properties, and new condominiums are being constructed for new residents who are moving into the area.

“At the current pace and in the current trends, it will maintain pretty much the current structures, although gentrified,” Betancur said.

The effects of a gentrified area can be devastating to the community that is already present.  Pilsen has historically been home to mostly Mexican residents, who give a strong, defining culture to the neighborhood.

According to the United States Census Bureau, the percentage of Hispanic residents keeps declining as more residents of other races are moving in. In 2000, Hispanics and Latinos made up 62.7 percent of the total population, specifically in the 60608 zip code. By 2010, it decreased to 55.9%.

The displacement of current residents is causing the loss of many aspects of community that Pilsen is known for, like “networks, support institutions and structures, neighborliness, structures of self-help and mutual help, its Mexican flavor and composition,” Betancur said.  “In short, a completely different neighborhood.”

Although housing prices are still relatively affordable in general, price increases will eventually make in unaffordable to some residents.  As of 2016, the average detached home was valued at $308,989, which is higher than the average value of a home in the city of Chicago (priced at $298,915).

Byron Sigcho, Director of the Pilsen Alliance, said Pilsen has strict zoning as well as a mandate requiring developers to maintain 21 percent of the housing affordable. However, some would argue that this isn’t enough because the affordability defined does not accurately represent the community.

Affordable housing in Chicago depends on the Area Median Income (AMI).  According to City-Data.com, the median household income in Pilsen in 2016 was $37,333, compared to $53,006 in Chicago.  Additionally, 25.9% of the Pilsen population lives below the poverty level.

Jack Chavez, who has lived in Pilsen for two years, said he feels that people are not moving out just because of the more expensive living costs, but also because ethnic groups tend to want to live among others of their race. Mexicans are leaving Pilsen because they want to live in an area with other Mexicans.

However, some residents are seeing positive aspects of urban renewal in Pilsen.

“My thoughts on Pilsen have changed from negative to one of community, art, relationships, and growth,” Chavez said.

Pilsen is known for its rich culture and artistic community.  Many painters, writers, poets, filmmakers and other artists make a home there.

“It’s a very artsy community living side by side with blue-collar ethnic people,” Chavez said. “It’s an interesting dynamic in that one sees the old and the new intermingling in the same space.”

Despite these struggles, Pilsen residents maintain strong ties throughout the community and thrive on culture, which is why people are both staying in the neighborhood and drawing new people to move in.

Hays plans to take part in the community even after moving out.

“I do not intend to leave this community and never think about it again,” she said. “After you recognize the violence behind gentrification, it becomes really hard to ignore.”