While temperatures have been below normal for summertime in Chicago, the issue of gun violence remains hot -- very hot.

July saw a bloody Independence Day weekend where 82 people were shot in an 84-hour period. Fourteen were killed. Another July weekend had 22 shootings in 12 hours, including the shooting death of an 11-year-old girl.

Numbers like those were enough for the FBI and Bureau of Alcohol, Tobacco, Firearms and Explosives to send seven more agents to Chicago respectively by years end. This weekend, state troopers are expected to help Chicago Police patrol streets.

Since 2011, Pete Nickeas has been the Chicago Tribune’s overnight reporter, covering what the Trib calls “violence and mayhem.” In other words, he has been responsible for reporting on Chicago’s gun violence, which includes 1,066 homicides since 2011.

With a laptop, a couple of police scanners, his recorder and cell phone (plus a handy photographer), Nickeas heads into the streets four nights a week expecting to see “Chiraq’s” bad side. So what’s it like being a domestic war reporter?

Here it is, in his words: 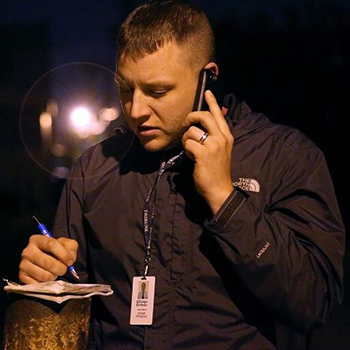 Q: What is a typical work day like for you?

Nickeas: “I usually wake up at about 5:30 or 6 [p.m.] and then I try to work out. I try to get to work at about 10 [p.m.] and get ready for the night. I meet up with my photographer, hop in the car and start reading the scanners so we can get somewhere centrally located, you know, if a certain neighborhood has had a lot of activity previously or we hear a lot about it at that time.

After we get our stories we head to the morgue at 5 [a.m.] so we can find out names of victims. Then it’s pretty much back to the office for the night.”

Q: How do you stay healthy when you’re constantly on the move and only really awake at night?

A: “It’s not easy. I have a hard time eating right, because I can’t just be eating McDonald’s all the time. I can’t just drink a lot or eat rich meals at restaurants. I have to make sure I’m eating vegetables, getting a certain number of workouts in. I really only have room for one unhealthy activity right now, and that’s work.”

Q: Has the stress of the job impacted your social life?

A: “I hang out with my wife, I don’t really have a social life. I’ve just had to say no to parties because of when I work. Especially in the summer, I’m super busy. It’s a little bit different during the winter, I have some more free time.

It can also be hard to connect with people. You know they ask you what you do and you tell them and it’s just a hard conversation.”

Q: Your stories often have quotes from witnesses or even family members. How do you ask people who have been through a traumatic incident questions?

A: “We strike out a lot. We are dealing with people many times on the worst day of their lives. I don’t ever begrudge anyone who doesn’t want to talk to me. I just say, ‘I’m a reporter, if you could help me out that would be great, but if not that’s fine.’ You just have to be straight with people, don’t jerk them around. The CPD doesn’t allow [police] to talk on the record.

People’s words help inform me past what numbers really can. They can give me information about the mood of the neighborhood and the real impact of the crime.”

Q: According to the Chicago Police Department, homicide numbers are down year over year, and Police Superintendent Gary McCarthy said today’s fast paced news cycle and the media are the reason the public thinks otherwise.

Do you think he has a legitimate gripe?

A: “The problem isn’t that we are reporting violence. The problem is it that the violence is happening. While homicides are going down, shootings are up. To me, the act of shooting someone is just as bad as a homicide. It shows intent to hurt and kill, and in a lot of cases survival is a reflection of so many factors like health care and luck.

"The number of people being shot and the number of shooting incidents are the best way to measure gun violence, not necessarily just homicides.”

Q: It was recently reported that about 16 percent of gun homicide victims this year have been under 18 years old. Is it particularly hard to deal with these stories?

Q: How do you unwind after a long night out on the streets?

A: “I try to work out, I garden and I’ve started woodworking in the past year. That’s actually what I was working on today before you called. I’m making a shelf for my kitchen. Beyond that I read and listen to music a lot. But I still have bad days where I’m in a pissed-off mood. I’m like everyone else in that respect.”

Editor's note: Sutton, a DePaul graduate student in journalism, has interned at the Chicago Tribune. Some longer answers were shortened for brevity reasons.

In this Chicago Tribune video, Nickeas talks about the impact of violent crime on Chicago neighborhoods.