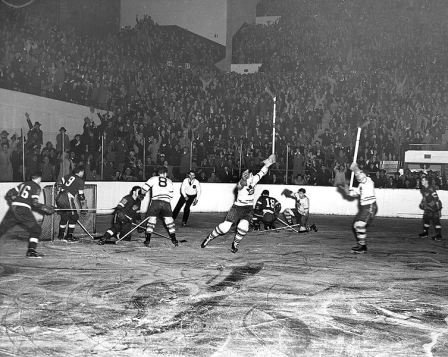 For 25 seasons, the NHL consisted of only six teams – known as
the “Original Six” Era. (Archives of Ontario, Canada)

NHL Realignment Has Chilling Effect on Some Rivalries

Game 7 of the Stanley Cup playoff series between the Chicago Blackhawks and the Detroit Red Wings marked the last time these teams will face each other in a Western Conference playoff series.

Next year, the NHL will realign its conference structure, reducing six divisions to four larger divisions. As a result, the Red Wings and Columbus Blue Jackets will move to the Eastern Conference. It will be the first time since 1980-81 that the Blackhawks and Red Wings will not be divisional rivals.

“Detroit and Columbus moving to the East can only be good — broken rivalries aside,” said Alan Bass, author of the book "The Great Expansion: The Ultimate Risk that Changed the NHL Forever". “This will make the Red Wings better with the smaller travel schedule, in addition to creating some great rivalries back east with some of the other Original Six teams.”

New rivalries will be forged, while others will be broken. Although they have been members of the Central Division since joining the NHL in 2000, the Columbus Blue Jackets never achieved the same level of rivalry that is shared by the Blackhawks and Red Wings. And with good reason: both Chicago and Detroit have co-existed in the same division for 76 of their 86 seasons in the league. While the division names changed–be it the American, Norris or Central Divisions–the rivalry remained the same.

Origins of a Rivalry
In 1926, the Chicago Black Hawks (then spelled with two words) and the Detroit (then called the Cougars) joined the NHL and were placed in the American Division.  It was a high point in the early days of the league, as it boasted ten teams–five in the American Division and five in the Canadian Division. But the league gradually declined to seven teams in 1938 and eliminated the divisions–in essence, making all clubs “rivals” with one another.

Four years later, the Brooklyn Americans folded, leaving the NHL with only six teams: the New York Rangers, Montreal Canadiens, Boston Bruins, Toronto Maple Leafs, Red Wings and Black Hawks. For 25 years, the “Original Six” era would see a league that, save for the Black Hawks, only played in the eastern time zone.

But just as rivalries can push people or teams to do extraordinary things, the NHL was pushed by its biggest competitor in the 1960s. The Western Hockey League was a top-tier minor league back then–the Western League that exists now is a junior league for underage players–and was looking to expand its reach and up its game.

“The Western League wanted to expand and become professional at the same level as the NHL.” hockey historian Steve Currier said. “This was a genuine threat [to the NHL].”

This prompted the NHL to expand from six to twelve teams, adding franchises in Minnesota, St. Louis, Pittsburgh, Philadelphia, Los Angeles and Oakland. The NHL also returned to a divisional format. New teams were placed in the West Division, while the Original Six teams were put in the East Division–regardless of geographical location.

The league expanded again in 1970, with the Buffalo Sabres and the Vancouver Canucks playing in the East Division, while the Black Hawks (renamed Blackhawks in 1986) moved over to the West. For the first time in 44 seasons, the ‘Hawks and Wings would not be divisional rivals.

The Western Hockey League was no longer a challenge to the NHL’s supremacy, but another threat emerged: the World Hockey Association. Founded by two former executives from the American Basketball Association, the WHA launched with twelve teams in 1972. This prompted the NHL to add more teams in 1972 and 1974, so as to block the WHA from expanding to certain markets.

“There was so much expansion in a very short period of time that there wasn’t enough talent to go around,” Currier said. ” By 1974, they were up to 32 teams in [between the NHL and WHA], which is more than there are now. There was a great disparity between the top and the bottom, and even the middle teams didn’t really have a chance to win the Cup at all. But there wasn’t much that could be done.” 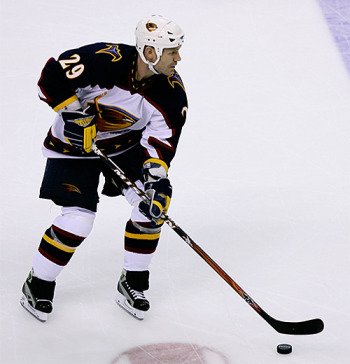 The relocation of the Atlanta Thrashers to Winnipeg was the catalyst for the NHL changing its division structure next year. (Photo by Keith Allison / Wikipedia & Creative Commons)

The 1970s were rife with numerous hockey teams founded, relocated and/or folded as both leagues tried to outdo each other. Finally, in 1979, the war between the NHL and WHA was over. The WHA ceased operations, with four of their teams joining the NHL. The league would remain stable until the 1990s. Between 1991 and 2000, the NHL would add nine new teams while four other teams would relocate.

Worth noting is that the Black Hawks and Red Wings were reunited as division rivals in 1980-81, adding another 32 years of bad blood between them.

Looking Ahead
Nothing lasts forever, including storied rivalries.

“I think a reason the NHL kept Detroit in the West for so long was their rivalry [with Chicago], but 20 years ago, there were way too many teams in the east and not enough in the west,” said Currier, who is writing a book about the ill-fated Oakland/Cleveland NHL franchise. “Now, with 30 teams, the league can make nice balanced divisions.”

The Red Wings' and Blue Jackets' exodus to the east is thanks in large part to the relocation of the Atlanta Thrashers. The team was sold, moved to Winnipeg and renamed the Jets. For the past two seasons, the Jets have played in the Eastern Conference, traveling to face opponents two time zones away.

“I’m cautiously optimistic about the alignment,” Bass said. “I think it will create a great amount of competition in the league. Hopefully, the non-hockey fans will take a shining to it.”

Hopefully, the hockey fans will like it too. Next year, the Blackhawks and Red Wings will meet only twice during the regular season – far less times than the teams have traditionally met each year. The team that Blackhawks fans love to hate will go from perennial nemesis to occasional visitor. But if the teams do meet in the playoffs, it would be in the Stanley Cup Finals -- a series like that would quickly reignite any rivalry.