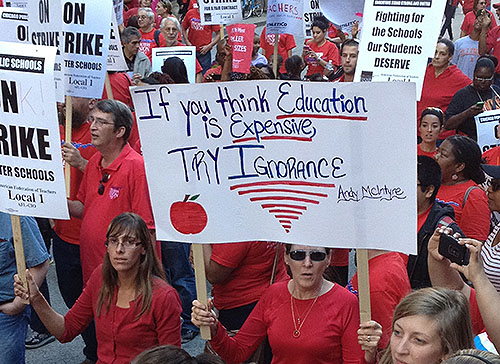 Thousands of Chicago teachers went on strike Monday and marched down Adams and Clark
streets to a rally at Chicago Public Schools' downtown headquarters. (Photo by Angelica Robinson)

Twenty-nine thousand Chicago Public Schools teachers didn't report to the classroom, but to a picket line on Monday as they went on strike over wages, classroom sizes and many other issues.

Their message throughout the day -- from a downtown rally in front of the CPS headquarters to picketing neighborhood schools --- was a consistent one.

Imagine walking into a crowded classroom without enough desks for students. There is floor seating or standing room only.

Imagine classroom temperatures reaching nearly one hundred degrees. This is because the classroom is without an air-conditioner. Imagine trying to educate the students—but without enough books or other resources to go around.

For many faculty and students at Chicago Public Schools, this is their reality, teachers said.

The teachers and union officials say they want to alter that reality -- along with better wages and changes to teacher evaluations -- while negotiating a new contract with CPS. Despite weekend negotiations, both sides parted late Sunday night as they union announced it would strike.

Monday marked day one of the strike, the first in 25 years by Chicago teachers. In addition to picketing at various Chicago public schools, thousands of union members and supporters gathered at the CPS Central office on Clark Street for a rally and press conferences in the afternoon.

Among the speakers was Roosevelt High School Junior Alberto Brito, who read a letter to Mayor Rahm Emanuel to the crowd. Brito said he understands first-hand what it is like to be in an overcrowded classroom without air conditioning.

“I was uncomfortable and wasn’t able to focus when I was sitting down on the floor or standing up,” he said. “Neither were my peers.”

Brito explained the need for smaller class sizes because it allows students to concentrate on what’s most important -- schoolwork. He said he hopes to be the voice of the students who, like him, are unhappy with classroom conditions.

“[Education] is not a first-come first-serve thing,” Brito said. “We deserve a fair quality education and they are not giving it to us.”

Jane Brueggemann, who has taught in the south suburbs for 36 years, supports the CPS teachers. Like Brito, she said she thinks large class sizes negatively impact the students learning environment because it lessens the individual attention teachers can give to each child.

“Chicago teachers often have to scramble for their own materials and for time with students,” Brueggemann said.

In addition to the class sizes, Erica Clark, founder of Parents 4 Teachers, said she is concerned about the lack of resources in students classrooms. A parent of a CPS student, she took to the podium at the rally to discuss the lack of resources, the need for libraries in 140 schools across the district, and stresses the need for arts in schools. She demanded a quality education for CPS students.

“The board is not listening,” said Clark. “Maybe they’ll listen today.” 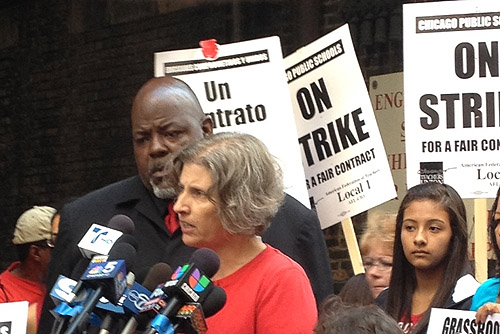 Erica Clark, parent of a CPS student, speaks at press conference outside
of CPS headquarters. (Photo by Josclynn Brandon)

Although the CTU says it is fighting for a better school system for students, many question the decision to strike, as it has left nearly 400,000 students out of school.

CPS provided half-day supervision at 144 area schools, but some questioned whether that was enough. There were reports of many parents arriving at area schools to drop off their children, unaware that there was even a strike.

Still, many supported the teachers. Students and parents joined teachers on the picket lines outside schools and at the downtown rally.

“Teachers are standing up for the future of our public schools here in Chicago and that is really important,” Clark said. “As parents we’re behind them.”

Mayor Rahm Emanuel told reporters that he disagreed with the union's decision to strike.

Brueggemann said she understands that having children out of school is not not a good thing. She hopes the CTU and the school system will come to an agreement soon. However she considers the time off for students an investment.

“If the teachers are successful in building better schools,” Brueggemann said. “That investment in time is going to pay off in big rewards for the children.”

Jitu Brown of the Kenwood Oakland Community Organization also addressed the issue of children being out of school at Monday’s press conference.

“We would rather the children miss a few days of school and learn what it’s like to stand up for your rights,” Brown said, “than continue to go to schools that are sabotaged by a school district that dare say children first.”