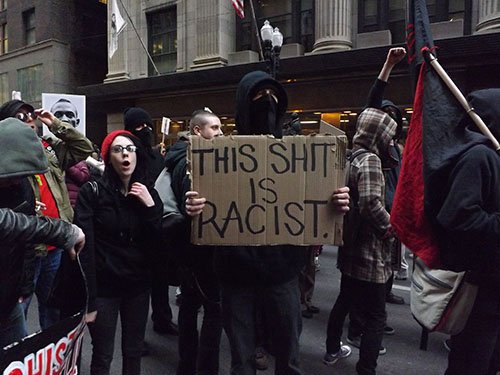 A protester shares his thoughts on the 54 school closings, most of which are located in
African-American and Latino neighborhoods. (Photo/Angelica Robinson)

Dozens of teachers, administrators, union officials, clergy, school janitors and lunchroom staff took a seat in protest on Wednesday afternoon -- in the middle of LaSalle Street in downtown Chicago.

They were among thousands of demonstrators who gathered at Daley Plaza  Wednesday for a rally led by the Chicago Teachers Union in protest the proposed closings of 54 Chicago Public Schools.

The rally, march through downtown that clogged rush-hour traffic and the LaSalle Street sit-in -- a promised sign of civil disobedience -- ended in front of CPS headquarters 90 minutes later with speeches from the Rev. Jesse Jackson and Chicago Teachers Union President Karen Lewis.

An estimated 150 protestors sat down peacefully on LaSalle, in front of City Hall. Chicago Police said 127 protesters were detained, ticketed and released. Police asked protesters to leave, then handcuffed them when they refused and led them to nearby buses for processing.

The teachers union warned of the sit-in in a memo that was distributed early on Wednesday, which stated protestors would, "risk arrest." 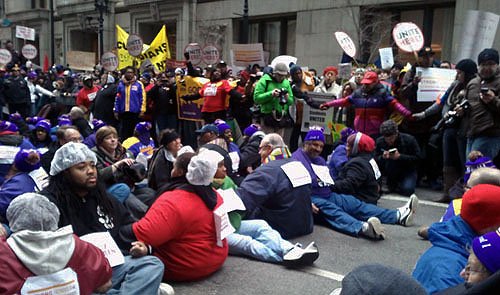 He called on them to vote on a U.S. Senate and House bill which would place an immediate moratorium on school closings.

"Education is a human right. What do we do?" Brown asked the crowd.

That was one of several chants the group -- estimated in the thousands at the plaza but several hundred for the march -- yelled during the demonstration. Another: "We need teachers, we need books. We need the money that Rahm took."

Prior to the demonstrations, Mayor Rahm Emanuel said in a press conference Wednesday that negotiations on the school closings are over and the plan will move forward. Emanuel said that he and Chicago Public Schools CEO Barbara Byrd-Bennett will proceed with a plan that's necessary for them to live up to the pledges they made -- to put children first.

If approved by the school board, the closings will begin in June, the end of the school year. It will impact 30,000 students.

Audio slideshow: Watch below or view in a full browser.

Lewis called the school closings racially motivated. Many of the closings are on the South and West sides in predominately black and Latino neighborhoods. Aldermen from those neighborhoods -- including Robert Fioretti (2nd) and Ricardo Munoz (22nd)  -- were at the demonstration.

"They are closing down schools that have names of African-American icons," she said. "These are injustices … [They are] wiping away the history of a people."

Teacher Tyra Smith said she participated in the rally to "serve notice today on the failed leadership of black leaders in the city. They have sold us out. If you don't stand with us, then you stand against us."

Alexis Moore, a student at Lindblom Math and Science Academy in Englewood, said closing the schools won't make things any better for students. She's concerned with the increased distance students must travel to school -- many will walk through crime-ridden, gang-ruled streets.

"Y'all don't walk in our shoes, y'all don't know how it feels to walk everyday to school," she said. "You have little kids walking farther to school everyday,  which could be dangerous.

"Don't close our schools because we don't have anything else. Y'all say education is the future, so why are you trying to limit what we already got?"

The district says closing the schools will offer students a better education because it will allow scarce resources to be spread across fewer schools. In addition, they estimate it will allow the district to save $43 million annually -- helping it defray a $1 billion deficit.

The teachers union demands the schools stay open. Lewis called for a safety plan to prevent the closings of so-called underutilized schools.

Despite CPS' proposal to close the schools, Lewis asked for people to show up at the beginning of the academic year at their original school.

"It's not over til it's over," she said. "On the first day of school you show up at your real school. Don't  let these people take our schools."